The British Grenadier Guard Regiment was the premier unit of Queen Victoria's Military Forces, it consisted of handpicked men from the army's the best formations and they were led by officers from the oldest families in the Empire! Dressed in the finest uniforms of the era and equipped with the most modern weapons available this Regiment was capable of defeating the best that any other country could put into the field!

Beneath their enormous Bearskin headgear the bright scarlet tunics of the Grenadier Guardsmen concealed coal fibre vests. These protective undergarments safeguarded them from all but direct hits at close range while they could deal out considerable punishment to their opposition with their Mk III Brunel Steam Carbines and Type II Grenade Projectors manufactured by the British EndoSteel Company. The Officers were well equipped with Wobley Revolvers and heavy straight edged Tesla Swords, the 'ZAP' of the electrical charge that could be released by a simple press of the button on the hilt of these fine instruments of death could stun any opposition easing their speedy dispatch!

This elite unit of the British army along with the other formations of the Guard were never shielded from combat and held in reserve they were often the first troops to muck in and give the opposition some curry in fact sometimes they were a bit to exuberant and would charge into close combat with their foes heedless of orders albeit in good order!

This photograph taken in the 1870's on Salisbury Plain during the Imperial Army's summer manoeuvres shows a section of Grenadier Guardsmen advancing in perfect formation led by their Officer! Of interest in the background Captain Darling can be seen discussing the war games with Lord Wotsit  wearing a blue uniform with his trusty Triambulator nicknamed 'Maisey' in the background!

When I saw these Ironclad Miniatures VSF Grenadier Guards I just had to get some! These are good casts of very well scuplted figures. In true VSF theme they are advancing in a good variety of poses and the officer and sergeant are well posed. I like my figures chunky and these fellows are just that and they are very well detailed! The faces are good and there is a plethora of facial hair for the painting!

In all their glory and sporting my inadequate paint work my section of VSF British Grenadier Guards!

For my FUBAR VSF games their Carbines are the equal of Galvanic Rifles and they're armoured so have a higher saving throw. Their activation levels will be good but not great however unlike other sections/squads they have the advantage of activating as two five man half sections and if they have their officer or sergeant attached will get a positive modifier! Lastly if they ever find themselves starting their turn within charging distance of an enemy unit no matter if its entrenched or a even Steam Powered Armoured Contraption on the roll of a natural five or six when activating they'll muck in for Her Majesty and charge said target! These troops are definitely going to hard nuts to crack when in action...but what else would you expect from Britain's finest! 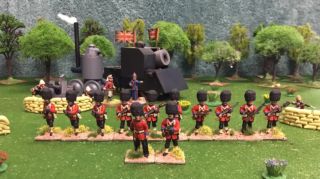 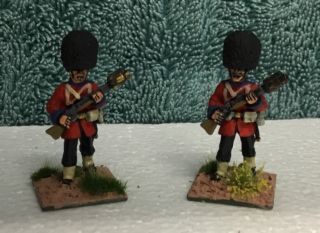 A close up of the Grenadier Guard section on Salisbury Plain! 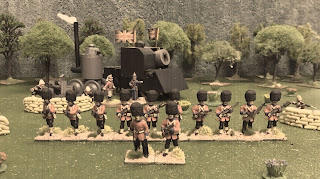 I am so tempted to get some of Ironclad's VSF British Line Infantry clad in Home Service Dress complete with spiked helmets...ooo yeah!


And just so you know I am not on Ironclad Miniatures payroll I just love their stuff!

Next Time, a FUBAR VSF AAR
Posted by Captain Darling at 23:15