Well time for the 2017 Christmas FUBAR VSF game! This year we're going down the PULP them after the success of the Big Trouble in Little Tinkle trial game! Without further ado here we go with..."The Spirit of Christmas"

"The Spirit of Christmas" - the Blurb...

December 1877, a battered Campaign chest was delivered to the Coding Division of Queen Victoria’s S.O.E. The Boffins were eager to examine the tattered contents which consisted of two papyri; these scrolls were covered in faint Ancient Egyptian hieroglyphs that were rumoured to contain Biblical secrets. Fueled with gallons of tea a s hundreds of biscuits S.O.E.’s intelligentsia had soon revealed the texts deep secret...(insert dramatic music here)...that the “Spirit of Christmas” was an actual artifact and not only that but it featured clues to its location!

Armed with this information several Cambridge Professors accompanied by S.O.E. Field Agents traveled on the 3:20 from Victoria Station to the sleepy coastal town of Dunghill on Sea where further clues were discovered regarding the current resting place of the “Spirit of Christmas”! After S.O.E.’s jaunt the small Latvian hamlet of Dropalog became the focus of events and the British Government approved an expedition into the environs of the Evil Tsar of Russia!

Move forward a fortnight and as the sun rose majestically a steam air ship decamped the British Expeditionary Force only a chain from Dropalog, the Red Coats, led by Captain Small-Parts then advanced to recover their prize accompanied by an S.O.E. professor.

Unbeknownst to Small-Parts and his party Doktor Von Hades had discovered the details of the British endeavour and had dispatched a gang comprised of some of his evilest minions to snatch the “Spirit of Christmas” from the Britishers grasp...they arrived at Dropalog the same morning... 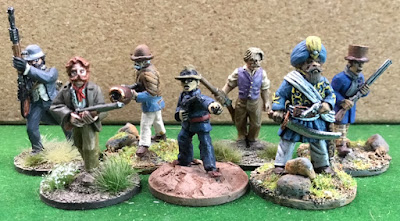 The Bibs and Bobs... 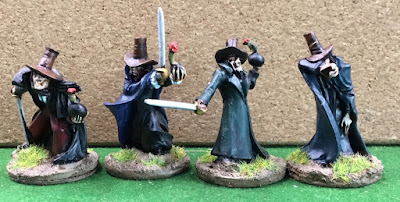 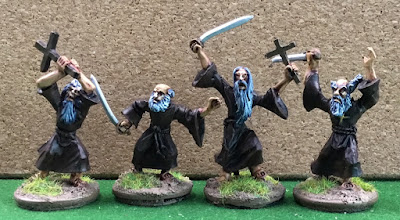 Special Rules:
Characters can carry only one artifact and can do so at no penalty.
Game length is 10 Turns.
Turns 1 to 4 a TRUCE is in effect and Team Great Britain and Team Evil may not target each other, game generated Characters are not covered by the truce so go for it with them as they will with you!
Doors cost 0"
Window entry cost 1"
Fences crossing cost 1"
Moving upstairs/downstairs costs 2"
Artifacts: when discovered...
Move the discovering Character adjacent to Artifact and roll for a Booby Trap
a 6 results in a 2 dice attack hitting on 3+
a 5 results in a 1 dice attack hitting on 3+
Note -  Hero Types  and Trust Chaps may play a maximum of 2 Hero Point that give a -1 modifier for the To Hit Number per Hero Point for these attacks

Game Characters
Mad Monks and Cultist Swordsmen:
Controlled by the Umpire BUT must attack the closest Player Characters with fire or by charging.
A total of 4 pairs are available, a pair will appear on a roll of 5 or 6 when any building is entered for the first time. Once the forth set is placed no more will appear BUT there is umpire discretion at call here!
Mad Monks and Cultist Swordsmen:
Activation Automatic with 1 Action only
Expertise 4+
-Monks may only combat with sword bonus
-Cultists combat with sword bonus or may cast bombs up to 8 inches that attack only the  Character targeted
Wounds 1
Hero Points 0
Save 6+
Statue Activation (Umpire discretion):
Anytime the Spirit of Christmas moves within 4' of a Statue the Umpire may activate said Statue and it becomes a Character:
Activation Automatic with 1 Action only
Expertise 5+
Wounds 4
Hero Points 0
Save 4+

Victory Conditions:
Locate and extricate to their side of the table as many of the five hidden stashes in the town and kill as many of the opposition as possible. A figure must leave the play area and can not return to achieve this.
Stashes:
"The Spirit of Christmas" 5VPs
Crate of Frankincense, The Original Candy Cane, The Present Stash & Barrel of Muir 1 VP each
Killing an opposition Character 1VP (game Characters not counted!)
Highest total after 10 Turns wins (the Umpire at their discretion may extend by 2 turns) 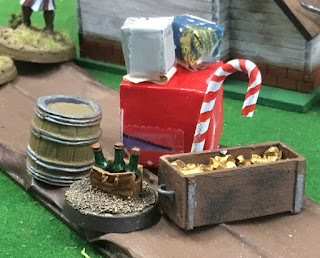 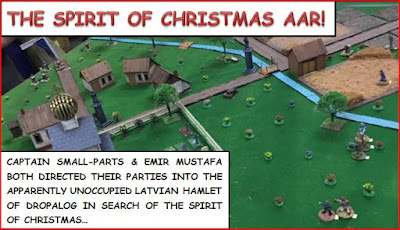 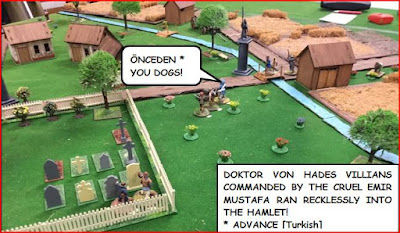 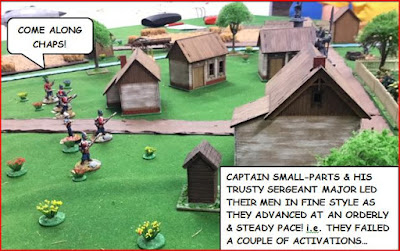 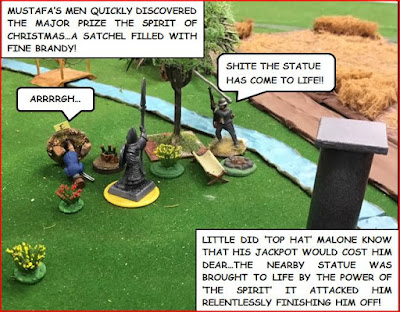 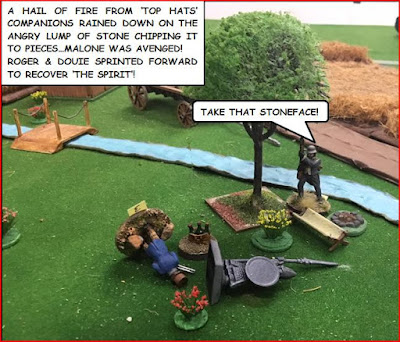 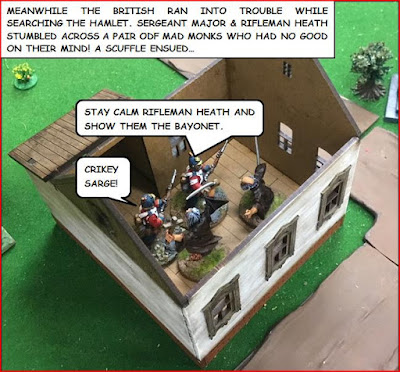 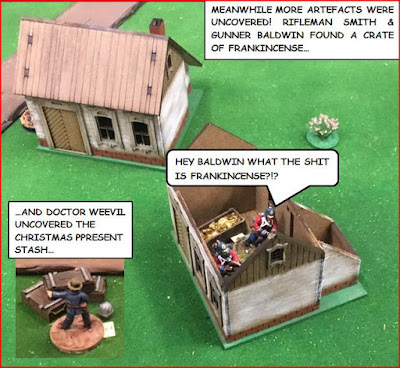 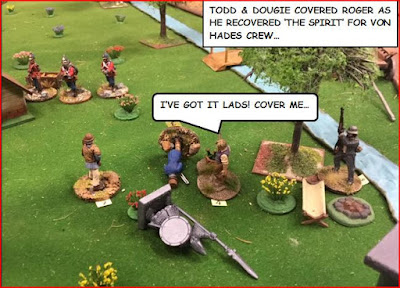 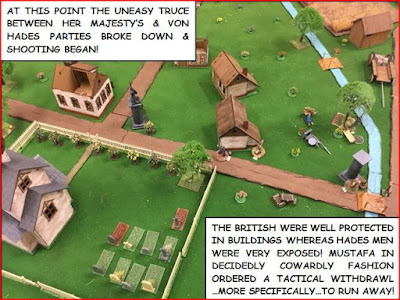 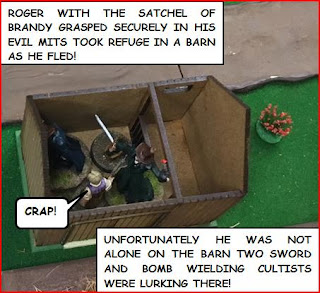 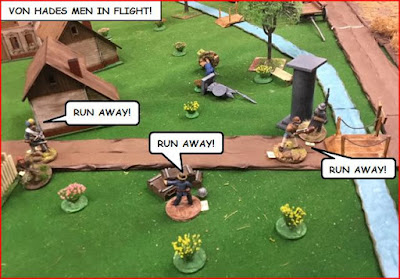 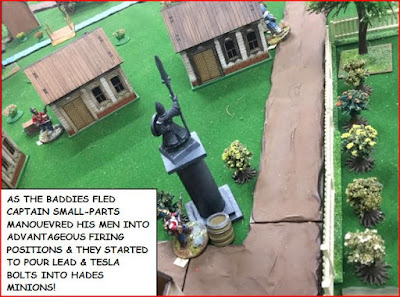 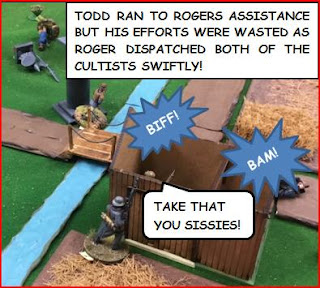 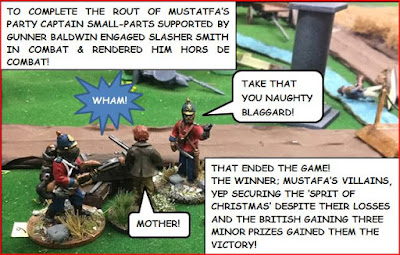 The winner was Von Hades Evil Minions! That's a bit of a smack in the face for the Empire!

The Queen’s Men! 5 VPs
Crate of Frankincense, The Original Candy Cane, and the Barrel of Muir 1 VP each
taking out two of Von hades party 1VP each

It was very much a Pyrrhic Victory for Von Hades boys they were hammered! In hindsight I should have stuck with the main artefact being worth 3 VPs like in the Big Trouble in Little Tinkle test game instead of 5 but hey you live and learn!

The rules played out a good game again! Stu had a great idea for an update to the rules which I'll incorporate for our next play, Activation Roll occurs after all figures complete their first i.e. default action. This is great as you need to complete your first action for every figure without being certain of a second one...love it!


Next Time: Good question!
Posted by Captain Darling at 00:42