Well I received my Ironclad Miniatures VSF British Policemen, they are nice castings and they live up to their pictures ion the Ironclad site! These Bobbies will no doubt come to grips with the evil minions of Doktor Von Hades and with true British pluck will surely tweak the noses of the bad guys! I ordered 4 figures with capes armed with revolvers and 8 figures with long arms. For character the cape clad ones are winners, I especially like the chap with the lantern in one hand and revolver in the other you can just imagine him in foggy London patrolling a dim backstreet inching forward into the unknown...

Anyway these are how they look after I've slopped some paint on them. Initially I had their uniform almost black but decided to go with more of a dark dark blue colour instead. There's lots of lovely Victorian facial hair on these fellows!

I took the opportunity while painting my Bobbies to assemble some laser cut bicycle stands I purchased on EBay quite a while ago. I picked them to see if they would make a good substitute for buying figures on bicycles. Basically while the figure is 'mounted' the bicycle moves along with him and when the figure dismounts the bicycle stand is simply removed. The finished stands look like they will work but the proof of the pudding will be using them in a game and see how the plan fares on the tabletop!

Here's PC Plod with the assembled bike stands. the bikes are thin MDF (2mm I think) and the stands are plastic. The circular figure bases are included in the deal. 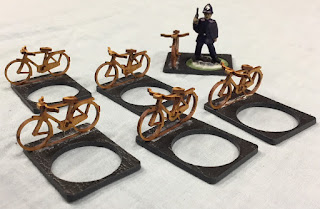 Painted up bicycles on stands with the PCs treadling into action!

The same view from above..

Dismounted and ready for sleuthing! Yeah I know it's the same picture as above...

Well I hope everyone enjoys the Festive Season and doesn't over indulge! I'm looking forward to sharing my continuing VSF trials and tribulations with everyone in 2018!


Next Time those AARs?
Posted by Captain Darling at 15:50