Well it's been a bit quiet here on the Emporium for a while...apologies for that I've been tied up with some other projects but I am happy to say I've was inspired to get into a bit of VSF scratch building again. Here's my latest VSF game accessory the JVMG Mk II Projectile Accelerator AKA The Moon Cannon based of course on Jules Verne's writings!

Period pictures of he JVMG Mk II Projectile Accelerator in situ on Salisbury Plain with its naval crew preparing a test fire! Captain Darling can be seen in the group of three Officers! 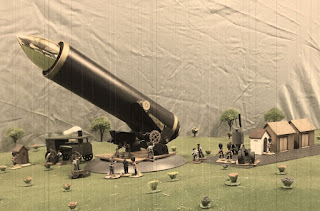 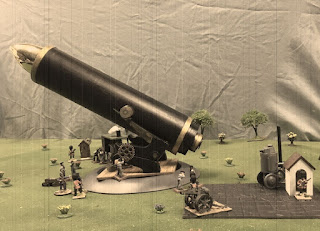 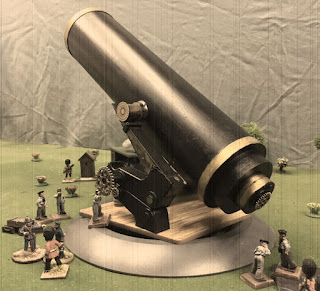 Captain Darling posing alongside the Prototype Interplanetary Travel Pod for use with the JVMG Mk II Projectile Accelerator, his trusty Triambulator is parked along side it. 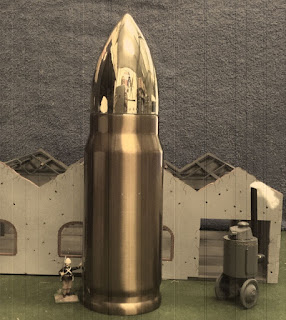 S.O.E's Development Section had been toying with creating an interplanetary transport system to take their agents to the Moon ever since the first Martian Invasion of the Earth. They believed there could be strategic and territorial benefits in such a venture not to mention of course the jolly ballyhoo the landing of an Englishman on the Moon would cause and prestige boost to be gained for Her Most Gracious Majesty, Queen Victoria who would then also be Empress of the Moon!. It was in late 1876 that Professor Tangent made a breakthrough with a powerful yet compact explosive material that would enable S.O.E.'s IT (Interplanetary Team) to bring their ideas to fruition. Leave was sought and granted to build the JVMG Mk II Projectile Accelerator that had until now been nothing more than drawings on blue prints. Also put into production was the Interplanetary Travel Pod.

This whole project came about when I was shopping for a Christmas present for my brother and I spotted this small thermos on EBay; a great part present for him and a cool projectile for a Jules Verne type Moon Gun! I ordered two immediately and was AUD$27 out of pocket...

The projectile needed no work I'm using as it comes plus is doubles as a cool thermos when I need one!

The cannon wasn't too much work really I just needed some good old PVC pipe, some sheet styrene and a rummage through my parts box. I found a few of Dragon 1/6 Panzer II parts, springs and a return roller plus an old speaker surround. Okay that's basically it bring on some super glue and I'm ready to roll! 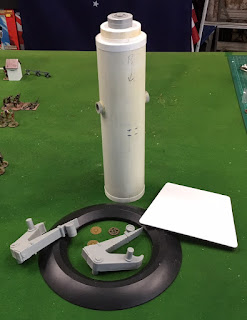 I used 70mm PVC tube for the barrel capped one end and added a couple of styrene sheet bands. The end is a 60mm piece of capped styrene and the Panzer II return roller. I sanded off all but the serial numbers on the return roller they looked like a casting number so I thought that'd be a cool detail!

I created a 'wooden' platform from styrene sheet and used some PVC tube as a joiner for the Panzer II spring sets which become the gun carriage. This sits on a rotating base i.e. the old speaker surround to be painted to look concretish.

I then added some Steampunk gears i bought from EBay.

The inside of the barrel was lined with felt for a snug projectile fit and also to protect its finish...

Some painting and super-gluing and then you get this! 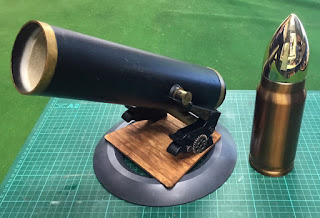 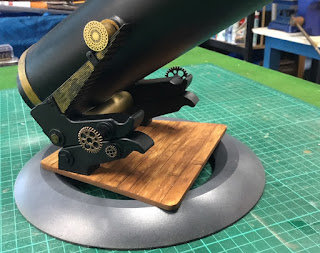 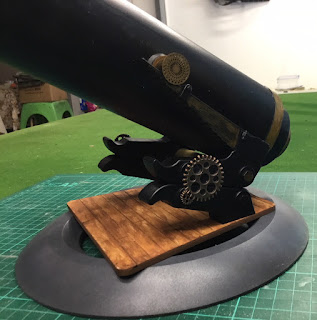 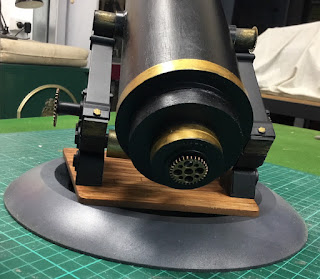 Hmm I've also got pictures for two AAR's just waiting on blurb I must try to use the Christmas break to get them done!

Next time...The annual FUBAR VSF Christmas Game, the scenario this year is 'The Spirit of Christmas!'
Posted by Captain Darling at 19:48