Birth of the Steam Powered Landship!

Mankind was much changed by the Great Martian Invasion in 1874 mens minds were broadened and their outlooks extended! The developed countries of the world with established manufacturing industries became aware that the machines and weapons designed for use against the aliens could be developed further and produced with ease...

1875 saw the world war against the Martian invaders of Earth enter its second and decisive year, employing the mighty armoured wagons supplied by the United States of America human armies all around the globe had scored decisive victories against the alien’s fighting machines they had effectively turned the tide of the war. Now with the defeat of the Martians in sight political and military leaders looked to the future and what influence the revolutionary Steam Powered Armoured Wagons would have on the strategic options of the major powers.

As a result of the new technologies the world’s democracies were utilising in late 1875 a secret meeting in the depths of the thick woods of East Prussia was convened between the crowned heads of Imperial Russia and the recently established German Empire. The beautiful snow clad trees and fairy tale wooden cottage chosen for the location of the meeting belied the talks true nature. The discussions were heated despite the coolness of the winter temperature and they dragged long into the night. In the cottages main living room astride a large oak table abounding with vodka and schnapps the Russian Tsar and German Kaiser discussed their fears of a spread of democratic policies of the United States of America, France and Great Britain spreading into their own countries and poisoning the minds of the general populace. While the wild and cold winds blew on that dark night they entered into an unholy alliance and vowed to create for their two countries armies a fleet of armoured vehicles that would ensure their autocratic rule would continue unchallenged well into the future!

That night the Emperors tasked the best Russian and Prussian industrialists, scientists, engineers and metallurgists with creating an armoured wagon superior to the current generation of ones that originated in the United States and were in use by the armies of the world in their crusade against the Martians. The brief given to these experts was to design and build the largest, most heavily armoured and armed steam powered wagon possible.

The teams of specialists toiled long hours during the northern winter of 1875-76 drawing up blueprints and creating vehicle mock ups in an effort to furnish the Tsar and Kaiser with the armoured wonder they desired. Eventually in March of 1876 while the rest of the world continued to celebrate mankind’s defeat of the Martians they were ready to display a prototype before their Monarchs. The leviathan they had constructed had eight independently sprung iron wheels with rubber pads called tyres, the initial wooden ones could not support the machines weight. Power to drive the vehicle was supplied by two small high pressure steam engines each with its own funnel. Each of the eight wheels had its own leaf springs and in an unrivalled technological feat the steering controls turned every wheel individually allowing the huge vehicle to turn in a space similar to that of the smaller United States designed armoured wagons. Thick armour protected the crews and the armament was impressive; the landship boasted four 32 lb breech loading cannons in cast iron twin turrets and four of the new automatic ‘machine’ guns two per side in their own casemates. An armoured conning tower was placed centrally on the vehicles main deck with good vision through post holes that featured armoured shutters that could be deployed when in action with enemies.

When the prototype was displayed and tested before the two autocrats on a level clearing deep in the impenetrable forests of East Prussia in the spring of 1876 it was officially listed as the Steam Powered Landship Mark I and it performed like clockwork!

The Tsar was heard to call to his generals while gesticulating madly, ‘That’s what I need!” while the Kaiser was suitably impressed and belived that this vehicle would place his military in a position to defeat any country that threatened Germany. That very evening a production order was placed for the vehicle with German and Russian industrialists and production was to begin forthwith. A stockpile of the landships was to be amassed as a matter of urgency.

Interestingly a handful of crucial design flaws where hidden from the Royals and their military advisors that day by the cunning industrialists who drove the project and whose financial future was ensured if orders for Steam Powered Landships were placed. Despite the impressive features the new armoured vehicle boasted there were a few areas where the new behemoth failed to match the lighter Steam Powered Armoured Wagons emanating from the United States of America. Firstly each landship cost the equivalent of 5 of the smaller vehicles. Secondly the speed of these machines was only half that of their smaller United States designed counterparts. Thirdly the uphill performance was very poor and tactically vehicles would need to travel in pairs as it needed two coupled together to scale anything but a gentle incline. Then when moving down a slope the landships speed was equally slow and if any pace was acquired it would quickly overheat the break units resulting in the inability to stop! Lastly virtually all but the mightiest bridges in the world lacked the integral strength to support the weight of the landships so the developers designed a second version which carried heavy duty bridging equipment, there would be one of the special bridging vehicles to be produced for every four fighting units.

Despite the above drawbacks manufacture of the Steam Powered Landship commenced in April 1876 and many were soon in the hands of Russian and Prussian crews and were undergoing shakedowns to prepare them for action!

Unknowingly the developed powers of the world had just stumbled into the first industrial arms race in mans histiory!

Below is a picture taken of the Russo-Teutonic Steam Powered Landship  under guard in the East Prussian woods awaiting its demonstration before the Crowned heads of Imperial Russia and the German Empire. It was smuggled out Germany by an agent acting for the western democracies, Edward Darling who successfully evaded detection by the  border guards disguising himself as a sauerkraut vendor… 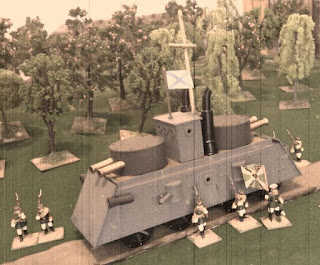 Next time…Scenario Four of ‘The Russian’s are Coming’ campaign…
Posted by Captain Darling at 19:26