Well here's a bit of a light read for all those Imperial Russian Army of 1877-78 buffs and yes I know there are a lot of you out there! It's a haughty tome and at just 486 action packed pages I am sure you'll breeze through it in no time!

Quite seriously though this book by F.V. Greene gives a great period review (written in 1879) of the Imperial Russian Army of the Russo-Turkish War of 1877-78. 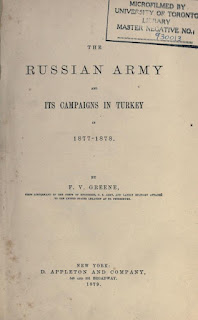 I found it very useful when putting together my hypothetical 'The Russians Are Coming' campaign set in 1879.

I found Part I the most interesting section of the volume as it covered all aspects of the Imperial Russian Army of the time and I'm sure this would still be valid well into the 1880s for those gaming in that decade. Curiously though the author refers to the Russian Gorlov machine guns as Mitrailleuse guns and on looking this up it appears that to some people of the time the word 'Mitrailleuse' was interchangeable with the term machine gun, by jingo the things you can learn on the InterWeb!

Also found in this book is a full OOB of the Imperial Russian Army of the time very useful!

Next time we'll be looking at the new Steam Powered Landship or maybe Scenario Four of 'The Russians Are Coming' campaign stay tuned to see which...
Posted by Captain Darling at 21:10