Building a fleet of Steam Powered Armoured Wagons was the furthest thing from my mind until I started putting together my hypothetical 1879 invasion of South Australia by the evil Russian Empire, at the very same time I started planning this Alien Dungeons released their All Quiet on the Martian Front range of models and the Martian Tripods looked fantastic. I thought to myself, “Ahhh I could put together a force of 28mm figures for my Russian invasion games and use those same figures in conjunction with a few Martian Tripods to play some VSF games”…I thought again and despite reservations of how much it would cost and where would I find the time I went ahead without regard! The AD Martian Tripods are designed for use with 15mm figures but even in 1/56 scale terms they stand an impressive thirty plus feet high, enough to scare any Victorian age soldier with a rifle! I bought a range of British, French, Prussian and Russian 28mm figures and some Martian Tripods and off I went. The Russians Are Coming games are progressing really well at the moment but before any of my 28mm humans could even think about taking on the invading Martian machines they will need something better than bullets, swords and horse drawn artillery and to save money I decided to build my own Victorian Armoured force.
I initially I considered making tracked vehicles and looked on the net at track and wheel sets that would suit the scale but my hip pocket groaned at the prospect of going down that track (pun intended). So I figured that in the 1870s and 1880s when my games are proposed you would expect the technology of the time to be employed and improved on so I decided to use wagon wheels for my vehicles. A quick search of the net and again my hip pocket groaned the 28mm wagon wheels from gamer related sites were pretty dear. A search of EBay saved my bacon a set of four Lego 33mm wagon wheels with axle bits (and free shipping) came in at around AU$2.50 woo hoo!
I then drew up some designs and came up with the below: 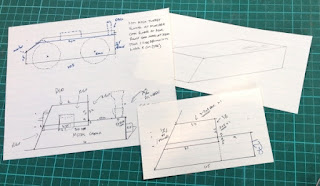 I wanted something simple but and in keeping with the period technology. To save a lot of work my Steam Powered Armoured Wagons were to be held together with countersunk square bolts easier to replicate than hundreds of rivets, my reasoning was the designers went with this idea to allow the panels of armour to be easily replaced! Sounded fine to me!

Below are the parts required to build a fleet of Steam Powered Armoured Wagons, everything was on hand in my workshop except for the Lego wagon wheels and the fiddly Lego bit that would represent the lights but these I bought cheaply as above: 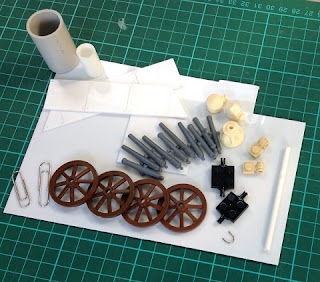 Assembly was easy, I cut out multiples of all the panels and went to work while my partner watched what must truly be the worst TV series ever produced, True Blood. I tell you what the Geneva Convention needs to be rewritten to include this in their banned methods of torture! 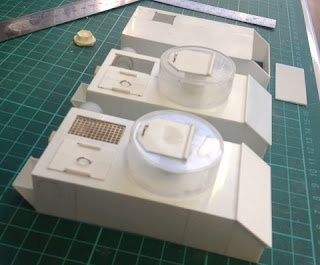 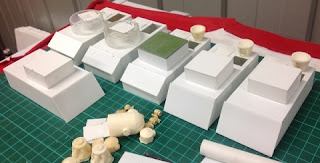 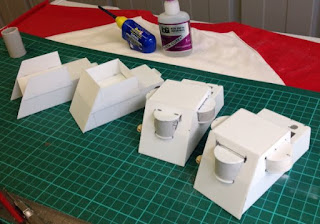 After assembly I painted these in a mix of Humbrol enamels, Polished Steel and Matt black I wanted a sort of clear lacquer on steel look hard to describe but something shiny and dark so a bit of brass and silver dry brushing would highlight them nicely. Even though I mixed these in the same proportions each time I found the tins of Polished Steel varied in colour so the vehicles came out in slightly different shades. Again not an issue as these were made in different factories cottage industry style. The cannons (mostly left overs from the Perry ACW artillery sets) were painted in gun metal and brass. I built fourteen of these in total, eight with turrets and six with fixed superstructures in a variety of configurations (Marks) included amongst them is the yet to be revealed flame thrower version and all in pretty quick time. I would say material wise these came in well at under AU$10 each unfortunately I didn't keep track of the hours I spent on them. 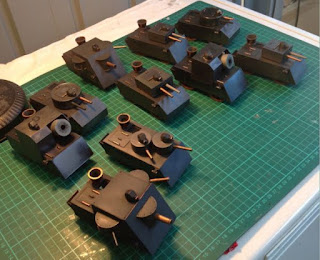 Anyway below are a few of the finished products displayed with some of my 28mm British/Colonial and Russian figures (I have made up a lot of national flags to identify these vehicles when used in human on human games). Once I finish my current campaign of colonial expansion these will get a good work out! 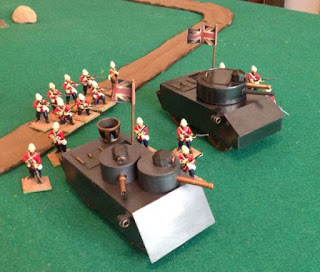 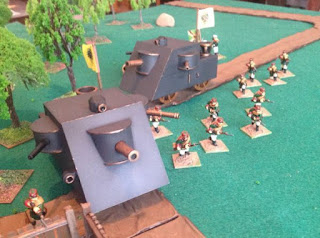 I hope this idea triggers off others to make vast fleets of Steam Powered Armoured Wagons to fill the gaming tables of the world…I know I know…
“Tell him he’s dreaming!”


Next Time: the AAR for the Crossroads scenario of The Russians are Coming Campaign
Posted by Captain Darling at 11:56