The Story of the Steam Powered Armoured Wagon...

The Great Martian Invasion of 1874-1875 accelerated mankinds scientific and industrial development and many new innovations were quickly realised out of necessity to help defeat the Alien aggressors. The story of the Steam Powered Armoured Wagon, known to the soldiers that were deployed with them as SPAWs was typical of the enhanced technological progress:


The story of the Steam Powered Armoured Wagons began in the years following the bloody American Civil War. A young engineer, Stanley Livingstone working for the Pittsburgh Engine Company whose family had several members suffer horrendous injuries during the war believed he had an answer to the deadly effects of the modern firearms soldiers were now equipped with. He envisaged a steel plated wagon powered by a steam engine surmounted with a cannon armed turret. With its metal skin to protect the crew and massive firepower supplied by cannons this new machine could roam the modern battlefield its crew protected and able to deal with any enemy! He imagined a mobile fortress!


Stanley had been fascinated by steam engines in his youth and during the conflict between the North and the South had worked for the Union side on the monitor class of vessels; he became obsessed with their up-to-the-minute design and the novel ideas used to create them. The revolving turret allowed the vessel to fight all round and its steel clad hull offered security to its crew, weaponry and steam power plant. He believed that he could create a functioning ‘land ship’ combining the new technologies of the Monitor vessels and the latest steam engines of the Pittsburgh Engine Company. 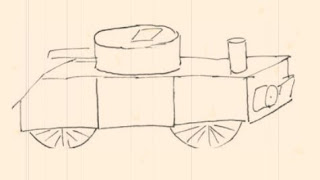 Unfortunately the reunited United States of America was war weary and in this environment Stanley’s original idea found no backers. Using his life savings and the experience he had garnered during the war years Stanley created several working steam wagons by placing the Pittsburgh Engine Company’s smallest power plant onto a series of old wagons. He did this to determine the smallest wheelbase he could successfully power yet leaving enough room to add a crew compartment and a turret. Once he had successfully created such a mobile platform he and a blacksmith built a steel box on it. The armour was bolted into place rather than riveted to allow for simple replacement of sections that may become damaged in battle. He then acquired two old cannons from a scrap dealer and mounted them in a circular Monitor style turret on the armoured body; the Steam Powered Armoured Wagon was born.

The only two known surviving design documents drawn by Livingstone: 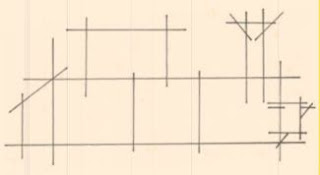 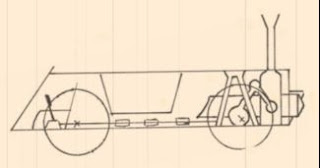 The initial trials were just that, trials. The crew battled ongoing problems with the engine, the drive train and the turrets rotation mechanism but after several months the machine was ready to be displayed to the military. Unfortunately even though Stanley demonstrated his now fully functional miracle vehicle to deputations from the armies of all the majors powers none showed any interest, his spirit broken and his pockets emptied Stanley gave up on his dream and started work again with a small engineering firm in Cincinnati. His pride and joy resided in an old barn on the outskirts of the city gathering dust.


The American spring of 1874 saw the arrival on the Earth of the Martians with their infernal tripod fighting machines! These beasts in their protected towers caused mayhem where ever they appeared and even the best the infantry, cavalry and artillery of the world’s armies were outclassed and powerless to fight back against their Martian foes. It was a junior U.S. army officer who remembered Stanley Livingstone and his Steam Powered Armoured Wagon and proposed to his superiors it could be mankind’s answer to the Martian invasion forces tripod machines.


On discovering the U.S. Army’s intentions the Cincinnati Steam Engine Company for whom Stanley then worked as a lowly design engineer quickly garnered all the rights to the design of the Steam Powered Armoured Wagon from Stanley promising him a vice presidency in the company and a rich bonus. Naively Stanley agreed to their terms and the company became a global powerhouse supplying Steam Powered Armoured Wagons to nations around the world. The vehicles were also made under license by several countries. These machines were instrumental in the human race defeating the Alien scourge and ensuring the continuance of mankind.


Stanley Livingstone however was let down by the management of the Cincinnati Steam Engine Company, he never received his vice presidency nor any of his ‘inventors’ bonus. He died before his time a poor and broken John Doe in a doss house in the slums of New York to where he had drifted in the late 1870s
A picture of two Steam Powered Armoured Wagons (a Mk I & a Mk VI) in service with the 3rd Steam Powered Armoured Brigade, of interest is the officer leading these men is the celebrated Captain Darling:

Next Time: the making of a 28mm Steam Powered Armoured Wagon fleet…well really I should do the AAR for the Crossroads scenario of The Russians are Coming Campaign so it will probably be that!!!
Posted by Captain Darling at 18:08