A Ramble on Rules...

Well now for a ramble on the rules selected for ‘The Russians Are Coming’ Campaign, I should probably have done this much earlier but better late than never…
I hope this gives you an idea of how these games are being played and why some events may occur during the AAR’s.
An ‘in depth’ search on the net for recommendations and reviews of suitable skirmish level late 19th Century rules sets was carried out. The good news is there are quite a few such sets of rules available for this period which led to the bad news of how to select one!
The considerations taken into account when selecting a set of rules were it:
After researching almost a dozen sets of rules the short list included:
All of these sets of rules had both advantages and disadvantages but the standout was Smooth and Rifled with its period supplement. That being said in the end it was decided to adapt the ACW skirmish rules that we currently use, ’A State of War’ by Richard Bradley. This set of rules is simple yet very effective for playing ACW skirmish games so it was decided it was worth tweaking them for use for 1879 Oceania. This meant we would only need to learn one set of rules to cover the two periods! I kept in contact with Richard Bradley while making the updates required and he was very helpful first up letting me make the changes and secondly giving me feedback on the alterations.
In truly boring style the revised rules were titled ‘A Colony at War’, actually we had about five names some of which were ‘out there’ but we held a draw and this one won. 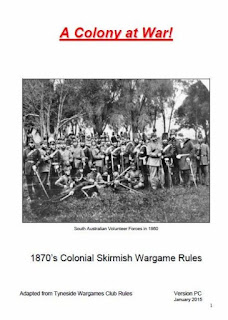 Here’s a summary of how ‘a Colony at War’ works!
Game Rules
These rules take up only a half dozen pages.
No ground or time scales are stated and one figure represents one man.
The base unit is a section with up to 12 figures each with a commander (exceptions allowed).
There are rules for cavalry and early machine guns.
There are listings of soldier and weapon costs in points.
Turn sequence includes both sides rolling for initiative and once that is determined it is “I go you go” with each player getting two action phases per turn followed by a morale phase (there is a possibility of ‘opportunity fire’ by the passive player).
Basic actions are move/charge, fire, change weapon etc. Fit figures get two actions a turn wounded figures get one action.
To be in command a figure must be within 16cms of the sections commander.
Unit commander casualties are not replaced and for the duration of the game that unit is ‘handicapped’.
The central mechanic of the game is different classes of troops (four in total) use dice with differing numbers of sides covering troop quality for actions. For example a veteran soldier rolls a 12 sided dice versus a lowly civilian recruit rolling a 6 sided one thereby giving a much better chance of higher roll results to the better soldier.
Movement is a fixed allowance per action with terrain penalties.
For shooting the firing figure rolls one die determined by their class and the defending figure rolls two one for range from firer and one for cover type, the total for defender is taken off the firers roll a negative result is a miss a positive result is a hit a high difference kills a low difference is just a graze. Casualty allocation is by random die rolls.
Melee is dicing per figures involved with modifiers, the highest roll wins and the higher the roll the better the win, results range from ‘pushed back’ to ’death’. A tie results the melee continuing into the next Action Phase.
Morale is pretty traditional where a modified die roll (there is a short list of modifiers) is looked up on a chart and results followed.
To keep the basic rules as clean as possible individual scenarios include special rules covering any specific circumstances that may occur in that scenario.
At this period despite the growing effectiveness of firearms ‘line’ formations were still is use by countries, these are not the strict and rigid Napoleonic type lines but still men fought in close formation. This formation is naturally slower than the skirmish order but there are benefits for having your men in ‘line’, they get:
There are circumstances of weapons jamming in the rules this is a generic term covering not only jams, but everything from a soldier fumbling to open a new ammo pouch to one who is just slow to reload for this shot. The extension of a jam being no fire (two jam rolls in a row) more probably represents a soldier running out of ammunition than a devastating failure of his weapon but that is of course possible. In the game such a figure can replace his weapon or pick up more ammunition by moving to the spot of a fallen comrade and spending an action phase stationary there.
Campaign Rules
There are seven scenarios in The Russians are Coming Campaign and the nationality with most wins after all seven have been played wins the campaign.
The Hero/Staff Officer rules allow both sides on any two scenarios within the campaign to replace one officer in their order of battle with either a Hero or Staff Officer. This figure then assumes actual command of the section of the commander they replace but is more than that they are a figurehead for all the units in the order of battle. Any unit with a line of sight to either the Hero or Staff Officer gets a bonus boost to their morale. Conversely if a Hero or Staff Officer is killed then all units must take a morale check at the next morale phase (even without a line of sight to the Hero or Staff Officer as such an event would soon be known in the ranks). This morale check has a large negative modifier and for any further morale checks required for the balance of the game there is an smaller negative modifier.
Lieutenant-General Lazarev actually died of a heart attack in late 1879 so from the third scenario onward the Russian player rolls a 6 sided die before the start of each game to determine if Lazarev has suffered his fatal heart attack at that point of the campaign.
For just the scenario coinciding with Lieutenant-General Lazarev’s heart attack a second 6 sided die is rolled with the below effect:
Also once Lieutenant-General Lazarev suffers his heart attack any unused Staff Officer substitutions are lost.
The End! Ramble over...
Richard Bradley’s rules are available at the Tyneside Wargames Club Site on the Download Page:


Next time: Back to the Russian Are Coming Campaign!
Posted by Captain Darling at 15:44