These are the set up details and special rules for the third of the The Russians Are Coming campaign games. A map of the play area is included. Please feel free to try this yourselves (you may have to adapt it for your rules) and let me know how you go!


South Australians –     all units enter on turn 1 from anywhere along the east edge
Russians –                  Army unit starts anywhere within 12cms of the barricade
Cossack unit enters anywhere along the west edge on turn 3
Game Length
The game ends after 12 turns then victory conditions are checked
Victory Conditions
At the game end the South Australians must clear the ALL the Russians from the barricade/roadblock to a distance of at least 16cms
Special Rules
Below is Captain Darling's map of the crossroads where Henley Beach and Tapleys Hills Roads meet and the surrounding area, the Russian barricade acting as a roadblock is shown. This diagram was thought lost but discovered in a secret pocket in the lining of his travel trunk many years later. 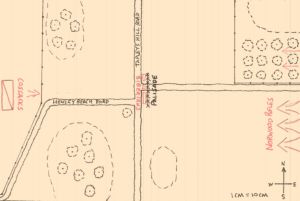 The below Scale and Legend were attached to the Captain's map after the campaign, they were created by someone unknown in later years!

Just a note her on the special rule covering shooting into the sun, for ease of play we went with any shot in a westerly direction no matter how slight the angle was a shot 'into the sun'. It saved the use of protractors and long straight edges, if you play this scenario feel free to change this!

The "historical" AAR will follow soon!
Posted by Captain Darling at 21:01