When I decided to start playing some 28mm VSF skirmish games I needed a set of rules, a search of the net revealed a few that fitted the bill but on seeing that a FUBAR set was available I went straight for them as I have used their WW II rules previously. Right I think it's time for another ‘Ramble of Rules’...

FUBAR are a series of small unit game rule sets with a generic core system that covered the basics with extra rules to flesh these out depending on the era/genre of game they cover/represent.

So in a nut shell what do I think of FUBAR VSF, basically marvellous! And I'll just throw in here I have no connections to these rules or their authors!

Here's a two page set of rules that provides players with quick, fun and enjoyable game, lovely to have rules where there's no great tome to get bogged down in checking out minute details. This is not to say these are a perfect rules set far from it, there are some gaps you could probably drive a rather large Mack truck through BUT these gaps are all covered by the all-encompassing 'Rule of AWESOMENESS'. This rule resolves any disputes that occur simply, it states: "Where a situation is not covered or vague, err on the side of the Rule of Awesome.”. Bingo! Now any two reasonable gamers can quickly resolve any odd situation that may arise and get back to the manning the thin red line pronto!

I have now played several solo games with these rules and three face to face ones to get to know them and customise them to my needs. All of these games were very enjoyable and enlightening as to where the rules really work and where they miss the target (small list here!).

Basically the driving force behind these rules are the units classification ratings; activation, Experience and Suppression. These ratings control how units perform. The rest of the rules are along the lines of most others: both players roll for initiative for the turn, all units get one chance to activate in said turn, there are a selection of movement options, for firing roll to hit with a few modifiers and then roll saving throws then take the hits as suppression or kills, for close combat roll to hit with hits killing and morale is very simple test when you have casualties and you keep running until you roll a successful activation for the unit. All of this fun and you only need a few six sided dice to enjoy it.

Okay if you've got the above ideas nailed you now know how to play the game, well almost as there is a bit more meat on the bone!

A units Activation number is what you must roll equal or greater than to allow your unit to perform an action having a large number of green or conscript units will lead to a boring game as they're hard to get moving! It is also your rally number so activating a running unit rallies it. The side with the initiative can continue to activate units until one fails, then the other side gets to activate units until one of theirs fail and so it goes back and forth until every unit gets one chance to activate in the turn.

Your experience level is what you must roll equal or greater than to allow your unit to score hits in fire and close combat again there are modifiers. Different weapons roll different numbers of to hit dice.

Morale rolls occur when casualties are taken and a roll is compared to the units activation number a failure on the roll and they start running, an activation roll occurs each turn there after until they rally or run from the tabletop.

The two big changes (house rules) that I have come up with from play so far that should affect play are:
The way our ‘wacky’ Victorian era armoured vehicles and robots is controlled by the rules conforms with the simple constructs of how the foot soldiers are handled and has lots of fun variables with breakdown and malfunction tables in addition to the damage one. Here too you can customise to your hearts delight!

The rules also feature a section on characters/heroes but I'm holding off on incorporating them in play until the basics are mastered!
I am actually still looking at other sets of rules for VSF skirmishing for two reasons, I like reading rules (I like others have a collection of rule books many I don’t use nor ever will!) and I am always interested in ideas that may help improve my FUBAR VSF experience.
I am not saying these rules are for everyone but for my purposes the make what is really a fantasy genre simple and fun!
The rules are available to download free at the below site:

Oh and some eye candy from a scenario play through where Stu kicked my scrawny Teutonic arse with his might British Boys in Red! Hurrah! incidentally these pictures were taken at an undercover outdoor night game, the four light sources give the figures/vehicles a sort of spooky day/night cricket look (a cool game for those in countries where Queen Victoria's Boys in Red did not spread the rules of it!)


Armoured Steam Wagons of the 13th Light Armoured Dragoon and 17th Steam Lancer Regiments supported by infantry of from the 55th Queens Galvanic Rifle Regiment and Robots from the Warburton on Sea Engineers advance on an Imperial German position AKA The Naughty Kaiser's Rascals! 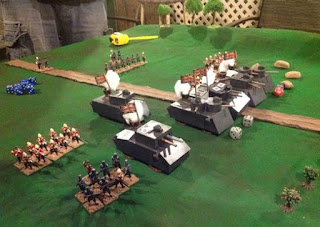 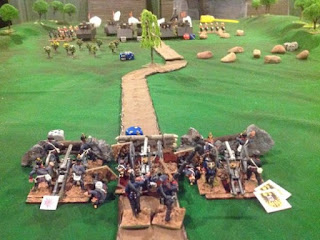 Back Soon! I have a couple of AARs and OOBs to write up and the fifth scenario of the Russians Are Coming Campaign to follow up!
Posted by Captain Darling at 19:57