The Affair at Broomhandle on Sea AAR

Well managed to get together with Dave and Stu for a Christmas FUBAR VSF game! I put together a scenario with a ‘Mystery Christmas theme’ which they would play while I umpired being most familiar with the rules. By the end of the night I rued the decision to umpire as I would have much preferred to have played…anyway a good time was had and many beverages were consumed in honour of the season! 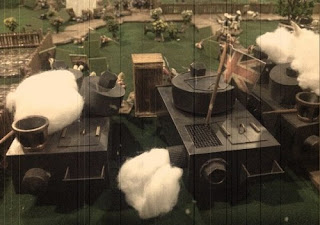 The Affair at The Broomhandle on Sea Crossroads

Just before Christmas 1877 to the north of Brommhandle on Sea at a small crossroad a British supply unit successfully relocated as their commander feared they’d be overrun by the beastly Hun but unbeknownst to him a vital crate of supplies required by GHQ was left at the crossroads in their haste! Immediately forces under the command of General Sir Blythe-Barrington-Blythe were sent to recover it! Unfortunately the British did not know that Lieutenant Carruthers of the nearby 14th Tower Depot Battalion had been captured by the nasty Germans of the 8th Imperial Steam Panzer Division and he spilled the beans to his interrogators as to the position and nature of the vital crate. The ‘Box Heads’ High Command ordered one of their ablest officers Grand Marshal Von Lardindork to deploy his troops to get the crate urgently.

The stage is set…

If a unit breaks, suffers any suppression or becomes involved in melee while carrying the crate it is dropped and must be picked up again

The British got off to a good start immobilising one of the German Armoured Steam Wagons in turn 1, it was of course their best one and it functioned as a pillbox for the rest of the game.

During the next 3 turns both sides infantry raced forward to secure the vital supply crate while the Armoured Wagons duked it out. The Germans got the worse of this duel but this was because they split their fire between the British infantry and vehicles whereas the Brits concentrated on just the Germans Armoured Wagons. It did come back to haunt the British later in the game when they would run low on foot sloggers to cart the rate around!

Turn 5 saw the crate move for the first time and it was toward the British edge of the board!

The brave section carrying it then took a single hit from the approaching German infantry and after losing just one man they broke and fled dropping the crate!

Unluckily for the Germans poor activation rolling on the next few turns prevented them getting to the crate and a second British section took up the cudgels and under covering fire from the vehicles they continued to move the vital supplies toward their board edge!

Then too late to affect the outcome of the game the Germans left flank unit at last started to move into action and the lone immobilised German vehicle took out two British ones and broke the infantry section currently toting the crate, it was on the ground again with only a handful of British foot soldiers still around to retrieve it.

But time was running out and with the crate beyond the reach of the Germans and in the tenuous hold of a few British Sailors turn 12 ended.

A great and costly victory to Queen Victoria’s glorious ‘boys in red’!!! 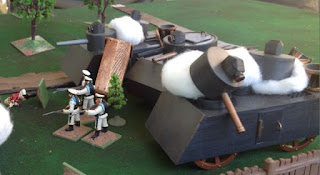 Oh and the Christmas connection well it was in the crate...did you guess it? Yes a Christmas tree...okay I know it's tenuous but both sides GHQs were desperate for a tree for the officers mess, you can't have them missing out at Christmas time without decorations as they enjoy a good roast and red regardless of the number of troops it may cost! 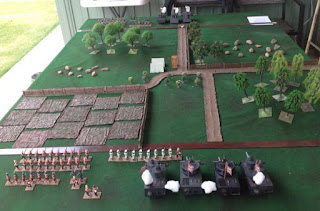 The two forces face off before the start...Queen Vic's boys are in the foreground the evil Kaiser Bills minions are in the distance! 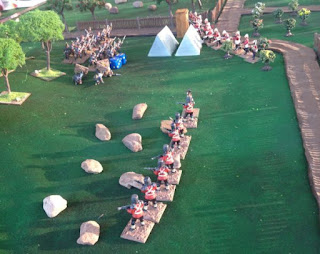 Turn 4 and the British are first to the crate and prepare to drag it off! 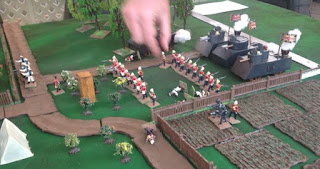 And on the next turn they promptly rout after losing a single figure...note the Monty Python hand of God helped them flee! 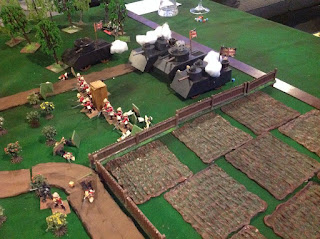 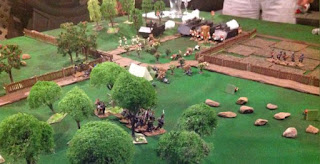 The final stages of the battle from the German point of view the British infantry have been hammered but they still have two Armoured Wagons supporting their efforts...note the British commander has drained both his beer and wine glasses just visible at the top centre of the picture! 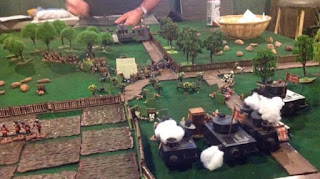 The final stages of the battle from the British point of view the German infantry have overrun the abandoned supply depot but are being decimated by the British vehicles...the section to the left of picture coming down the hill failed 5 activations which was crucial...note the German commander has eaten all his crisps and is washing them down with a drop of Jim Beam, Dan Murphy's was out of Schnapps!

Interestingly during the game the question of whether all units should be able to activate each turn was raised. Actually on a couple of occasions! There was a suggestion you roll rounds of activation alternatively until every unit has a 'go'. Now I'm not too thrilled with that idea and it negates the effects of failing an activation roll completely out of the game! But as one unit failed its 50/50 roll chance five turns in a row I could understand the request! To me that was unusually bad luck but you can’t rule out that such poor die rolling can ruin  a game. I’m wondering if we implement an 'emergency’ or ‘special’ activation roll, allow it once a turn, once a game or as per scenario rules. This would allow one unit the chance to try to activate a second time in a turn (even if it had already activated successfully) but at risk of a big penalty if it fails. So let's say you have a chance to win the game or plug a hole in the line do you risk the roll...the penalty would have to be severe, i.e. the unit breaks if unsuccessful, it doesn't have an activation attempt next turn, takes full suppression etc. Please let me know your thoughts it's something I may give a test run....
Next time...something riveting that you'll not want to miss! Yeah right!
Posted by Captain Darling at 13:33