The Landship Arms Race Heats Up!

Since the HMLS Dreadnought was built countries around the world began to think that a nation's strength and prowess would be recognised by the number and type of landships their military forces wielded and so the Landship Arms Race heated up...

When an unclear photograph featuring an image of a menacing looking fighting machine reached the London office of the Head of the British SOE (Stealthy Overseas Executive) on a gloomy winters day in January 1877 a great deal of excitement ensued. The SOE's most audacious field operative Edward Bigger had supplied a solitary picture taken at great risk to himself along with a report on what appeared appeared to be the Americans first successful attempt to create a super heavy ironclad i.e. a Landship! He had been given the assignment of monitoring the United States of America's arms industry after the launch of the British Landship HMLS Dreadnought in September 1876. He had diligently followed up his orders and they lead him to a secret American base located deep in the heart of the Virginian forests.

The boffins of SOE's Q Division poured over the sole photograph and were alarmed that it featured the obscured outline of what appeared to be a fearsome fighting machine. They issued a classified memorandum to the members of the highest circles of the British Government including a full assessment of what they believed they were looking at. They guessed the vehicle was powered by the new generation of American super high pressure compact steam turbine propulsion units that they knew were being tested by the Cincinnati Steam Engine Company who were trumpeting its power and reliability. Therefore they assumed this Landship was fast and from the look of the picture heavily armed with all 'big guns' as they could not identify a single rapid fire small calibre machine gun in the picture. They also assumed the armour plating was lighter than its British and European counterparts.

After assessing the news and informing her most Royal Majesty an urgent coded message was dispatched to Operative Bigger via the new-fangled Marconi wireless to get more information on this development as quickly as possible with no regards for his own safety!

The photograph of the supposed American Landship taken by SOE operative Edward Bigger in the depths of the Virginian forests. It’s of note that Bigger requested from the Q Division of SOE a 'ladys disguise' as he wished to conceal his photographic accruements in the bulges of the said disguise, unfortunately they sent the wrong travelling trunk and he found himself again disguised a German Sauerkraut vendor but this time in the woods of Virginia USA. However being the consummate spy Bigger pulled off the guise without the slightest hiccup! 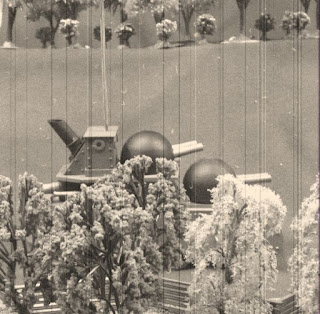 Next time...who knows, maybe a Christmas message! But I'm hoping to slip a 'Christmas themed' VSF game in before the 25th!
Posted by Captain Darling at 09:04