A warning this post should be subtitled “Uh Oh I feel yet another ramble on rules coming up”!

Boxing Day is one of my few ‘me’ days in any year, beer, cricket and miniatures! Since the Cricket is far from riveting this year I spent extra time solo gaming with the TV on in the background! Coopers 62 was the beer of choice for the day...


Okay so I am really happy to use the tweaked FUBAR VSF rules for my VSF games but they don’t have the depth I am looking for to cover the use of my Super Heavy Ironclads i.e. Landships. I want these super vehicles to be a big step up on the regular Armoured Steam Wagons so I have put the below in place for when they are in use. These updates allow for the fact the Landships have larger elite crews, heavier armour and better compartmentation leading to a much higher level of survivability on the fast paced VSF battlefield.

The standard Breakdown, Damage and Catastrophe Table are used for hits on Landships but with the following updates:
Also I have included the following clarifications into the rules concerning vehicles in my set of FUBAR VSF rules:
I’ve run a couple of test games today with the above rules in place and they worked out great! But with more 'plays' you never know I may need to tweak them if they don't satify the rwquirements and fit in with the rest of the rules.
Well that’s it with adapting the FUBAR VSF rules…that is until I get that first heavier than air armed conveyance completed (did I just type that!)… 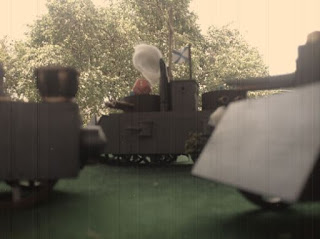 Here's a picture from one of my Landship games today, the Imperial Russian Landship Borodino cruises majestically past the shatter hulks of a couple of British Armoured Steam Wagons in the foreground...
Next Time some solo AAR stuff and what I spent my Christmas money on...
Posted by Captain Darling at 17:44