I’ve yet to play my “The Mysterious Affair On and About the Dniester!” scenario as I haven’t been able to get five people together at any one time! but i'm hoping to get enough people together around Christmas. In the meantime I really want to I want to test my FUBAR VSF PULP rules though so I put together a two player game for a run through. Actually a good idea really as ironing out any issues with my updates in a small game will make the ‘big event’ more enjoyable! Okay here we go…

Important information was coming to light regarding Doktor Von Hades latest evil inventions and they were alarming the Leaders of the free world. A field report from S.O.E. revealed that he was building a new clockwork Automaton, this ten foot tall behemoth armed with a large calibre rapid fire rifle was of great concern! Unlike the current Automatons it did not require a controller as it could be programmed before action and would then attempt to complete its mission with no regard to the opposition. Of interest was the Doktor needed the recently discovered element Randominium in the construction of this fearsome machine! At this time the only stockpile of this rare material was held in Little Tinkle, England at the home of a renowned German born Scientist. He was living in exile in England due to the wide spread extremist views on men with extremely weird hair styles that were rife in Germany at the time, his name was Professor Fred Einstein.


Doktor Von Hades in need of Einstien's Randominium decided to raid Little Tinkle and seize his supplies of the vital element. In the early morning of a fine November day one of Von Hades evil L.A.S.E.R. machines struck Little Tinkle again and again. The panicked populace fled from the town as many of its quaint building were severely damaged. Later in the day a raiding team led by one of Steel Ball's right hand men, Cottonmouth Malone arrived in Little Tinkle with orders to comb the ruins and locate Einstein's Randominium and any other items of significance that may help their cause and then extricate them to their Steam Airship. Little did Malone know but a dedicated troop of British soldiers from the 24th FootenMouth Regiment with an S.O.E scientist were nearby and alerted to intercept his raiders...

Special Rules:
Characters can carry only one artifact and can do so at no penalty.
Game length is 10 Turns.
Turns 1 to 4 a TRUCE is in effect and Team Great Britain and Team Evil may not target each other, game generated Characters are not covered by the truce so go for it with them as they will with you!
Doors cost 0"
Windows cost 1"
Fences cost 1"
Moving upstairs/downstairs costs 2"
Artifacts: when discovered...
Move the discovering Character adjacent to Artifact and roll for a Booby Trap
a 6 results in a 2 dice attack hitting on 3+
a 5 results in a 1 dice attack hitting on 3+
Note -  Hero Types  and Trust Chaps may play a maximum of 2 Hero Point that give a -1 modifier for the To Hit Number per Hero Point for these attacks

Game Characters
Local Militia & GedEye Tribesmen:
Controlled by the Umpire BUT must attack the closest Player Characters with fire or by charging.
A total of 4 pairs are available, a pair will appear on a roll of 5 or 6 when any building is entered for the first time. Once the forth set is placed no more will appear BUT there is umpire discretion at call here!
Local Militia & GedEye Tribesmen:
Activation Automatic with 1 Action only
Expertise 5+ Note GedEye are 4+ in Close Combat
Wounds 1
Hero Points 0
Save 6+
Statue Activation (Umpire discretion):
Anytime the Randominium moves within 4' of a Statue the Umpire may activate said Statue and it becomes a Character:
Activation Automatic with 1 Action only
Expertise 5+
Wounds 2
Hero Points 0
Save 4+

Victory Conditions:
Locate and extricate to their side of the table as many of the five hidden stashes in the town and kill as many of the opposition as possible. A figure must leave the play area and can not return to achieve this.
Stashes:
Randominium 3VPs
Jewels, Weapons Cache, Chemical Supplies, Keg of Heavy Water 1 VP
Killing an opposition Character 1VP (game Characters not counted!)
Highest total after 10 Turns wins

The 'battlefield', the east end of Little Tinkle 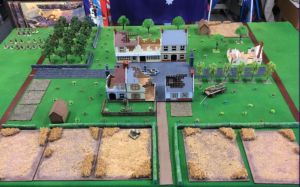 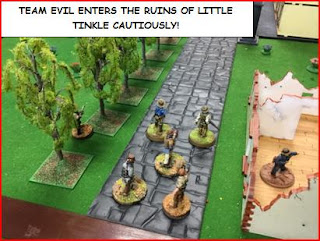 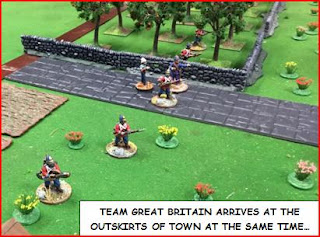 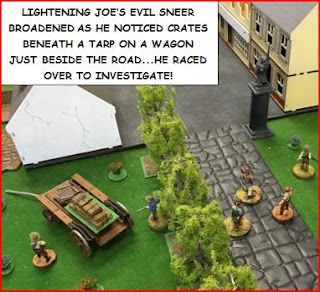 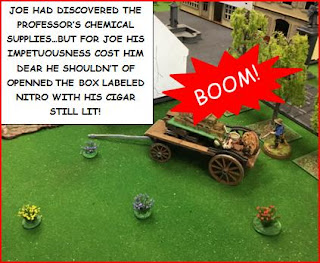 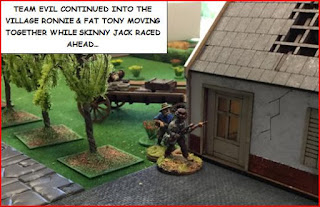 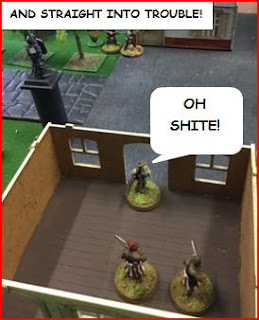 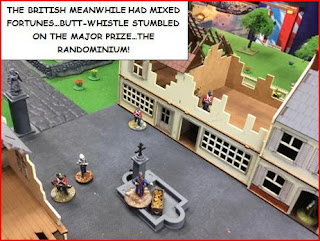 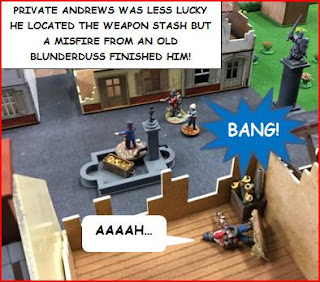 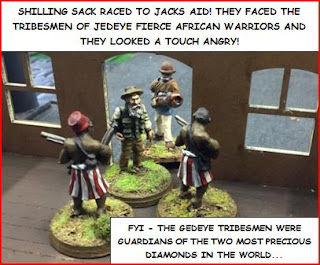 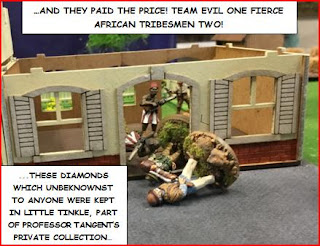 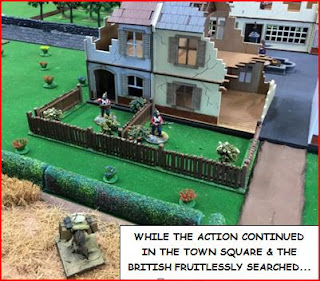 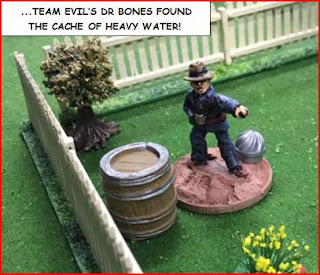 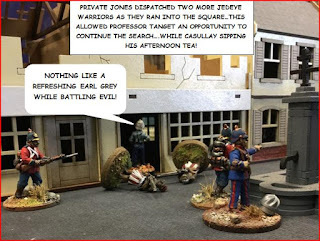 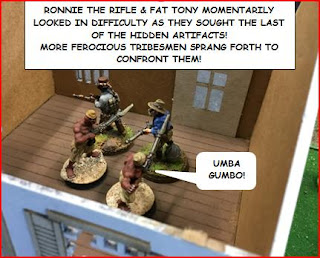 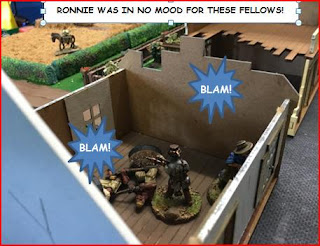 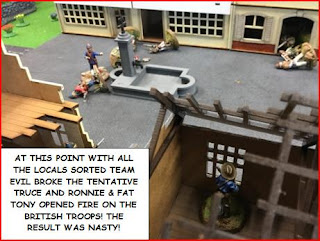 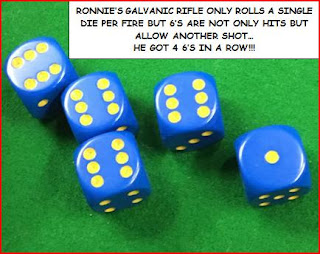 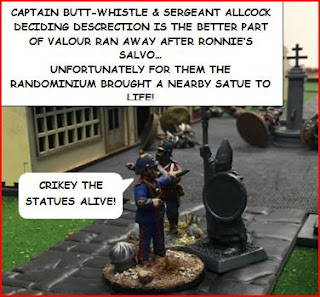 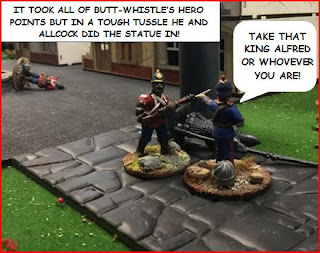 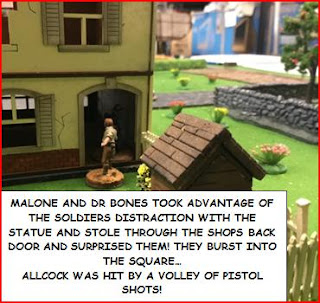 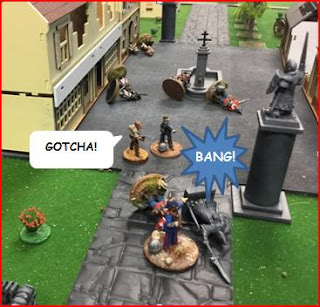 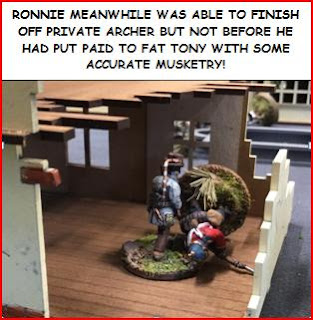 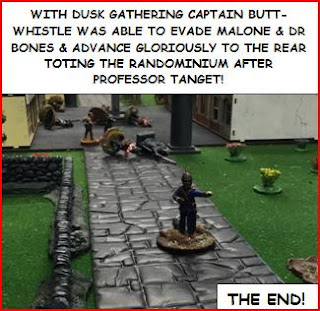 A very entertaining game it played well and quickly so fulfilled both the requirements I was looking for! There were a couple of hiccups with the rules around wounds and the the sequence of playing the game 'generated' Characters but I've rewritten them now and will play this game again to test them before going on to stage “The Mysterious Affair On and About the Dniester!” I hope you enjoyed this, I'll try to work out how to post my FUBAR VSF PULP rules so they can be downloaded if anyone is interested...

Next Time...probably another AAR as I still have a couple I haven't written up!
Posted by Captain Darling at 11:06