Greetings! It's been a bit of ‘All Quiet On the VSF Front’ here on the bally Blog for while ain't it...well a couple of reasons for that; firstly I’ve been concentrating most of my spare time on The Great Antipodean Adventure project recently and second; my partner and I have been planning Captain Darling’s Grand Tour a five week whirlwind tour of certain bits of Europe! My other half hitherto known as Kathryn is rather excited about the latter and decidedly unexcited about the former 😊!

I don’t usually like putting up WIP stuff on the Blog but just to show I’m still plodding along with my various VSF interests here’s some stuff I’ve been tinkering away on...

Buildings: Thanks to a small windfall from my mum at Christmas I picked up several Sarissa buildings which will work well not only with my VSF gaming but for my WW II and TGAA stuff. I got several dwellings, the double fronted shop, the end of row cafe, a third floor for an existing town house I had and the Victorian Pub. All go together well and with a bit of paint look the part. You could really go to town on these and really make them hum but they’re for gaming so I’ve kept it simple, I can always go back and detail them later... 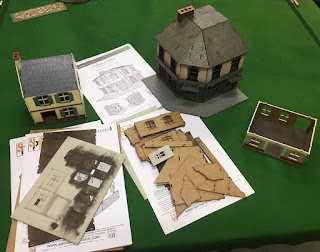 The Derailer Tank: I was given this baby by a devotee and plan on turning it into Doktor Von Hades Super Steam Powered Armoured Fighting Vehicle... 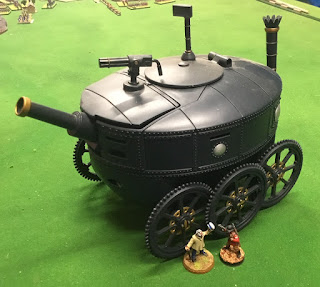 Scratch builds: I’m getting back to my British answer to the French Santos Dumont  airship, here's the current status of the Daley Brothers Steam Powered Armoured Balloon MK III...added a 28mm figure for size... 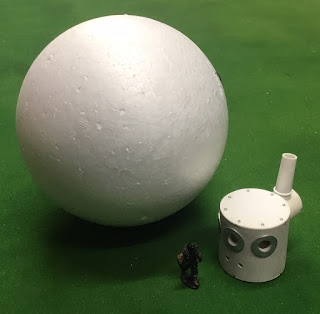 Now onto the Grand Tour: We've locked everything a few trips and ANZAC Day stuff but most of this trip will be off the cuff roaming once we arrive at each destination. Thanks to overnight trains most of the travel will be relegated to nights to maximise our 'touristing' during daylight hours.

An image of Captain Darling arriving in Rome during his Grand Tour dazzling the ladies... 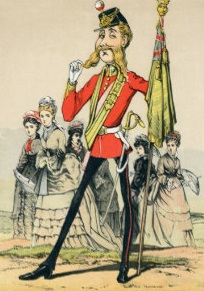 
Kathryn and I arrive in Rome on Easter Monday and then its on! Most places I've been to before, Vienna being the major exception but this is only Kathryn's second European trip so lots of new sites for her! Here’s a brief summary...


So lots of train travel and general tourist things but I have include some Captain Darling bits of interest, mind you this has cost me some trade offs in other locations but is worth it...


Luckily I've done a lot of the other military museums on previous trips so I can skip them, though Kathryn has shown an interest in seeing one of my favourite spots, the Russian Room at the Royal Museum of Armed Forces in Brussels.

Now if any of you know a must see ‘sights’ that fall within the itinerary please let me know I’ll add it to Kathryn’s list! Also any must visit eateries or drinking establishments!

Things will remain a bit quiet here for a couple more months but then normal transmissions will resume!
Posted by Captain Darling at 08:45