Captain Darling in the Sudan OR Working on a Tan while Battling Natives!

Our Christmas game looms, read on for relevant details gleaned from the diaries of Captain Darling...
Captain Darling posing by a statue during his 1886 Expedition into the deepest depths of the jungles of Central Africa...reportedly the expedition discovered a lost plateau and while exploring it engaged in all manner of exciting adventures and made many curious discoveries...here Darling is seen standing beside what appeared to be Egyptian ruins where they should not be! 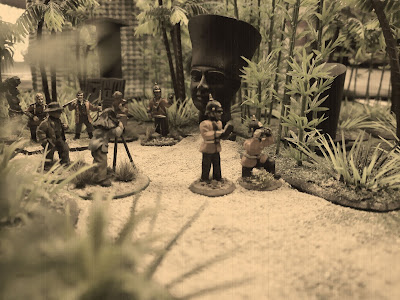 This Picture was taken by Percy Fiddler a member of Captain Darling's 1886 Expedition with a
prototype Eastman Portable Camera, these became commercially available in 1888!
During 1884 with the Mad Mahdi running rampant and Her Most Glorious Majesty's African Possessions in great peril Captain Darling stepped forward (as one would expect) donned his uniform and headed to the front of the battleline!
After an arduous journey across the Indian Ocean by cutter Darling and a small contingent of fellow Antipodean volunteers landed at Port Suâkin in early September 1884. Knowing his ol' mucker Chinese Gordon was in a spot of trouble in Khartoum he and his stout band made plans to travel there to join him. It soon became apparent to Darling that due to the Mahdist siege of the city this was not possible and the good Captain decided to wait for the relief force from Britain to arrive so they could join that. As it turned out waiting for Sir Wolseley's column was a mistake as it arrived too late to relieve Gordon and Khartoum! Despite this disappointment Captain Darling still joined Wolseley's force and was at the Battle of Abu Klea where he won great accolades and of course many medals for his bravery! After this victory believing the Mahdists had been defeated and order was once again restored to Victoria's African Empire Darling and his brave cohort departed Sudan. They left Khartoum in April 1885 for the Antipodes arriving in Adelaide, South Australia in time for tea and scones in January 1887.
Now dear reader it is at this point where our story gets interesting; why did it take so long for Captain Darling and his comrades to arrive at Port Adelaide, why were two members of the contingent missing both Bluey and Stan had just disappeared, how did Bert lose the lower part of his left arm and finally what was in the large number of elephant sized crates that accompanied them?
Rumour and gossip abounded regarding this Expedition, firstly in the fine drinking establishments of Adelaide and then around the globe spreading rapidly thanks to the wonders of modern telegraphy! It was said that Captain Darling had led his boys on a escapade of adventure and daring do in the environs of Central Africa! There were stories of exotic animals bigger than elephants and more ferocious than lions as well as treasures beyond the wildest  dreams of average man in the street! Each of these wild stories varied in their details and minutiae but they all included one phrase 'the Land of the Lost'!
'The Land of the Lost', what dear reader is the significance of this? Stay tuned for more details about this!
Next Time, The Land of the Lost Scenario!
Posted by Captain Darling at 11:02