The Era of The Great Steam Wars Begins…

Been a while folks but I'm back, this is the start of my VSF campaign posts, they'll run in parallel with my Martian Wars ones as the 28mm ‘human’ forces will be used in both. For these games I’m going to start off using the FUBAR VSF rule set…

The years following the defeat of the Martians dastardly attempt to conquer the Planet Earth and spread their evil influence within the solar system were ones of great technological advancement for Humankind. Man’s knowledge was expanded greatly as it battled the malevolent aliens but as a consequence of the total rout of the extra-terrestrials the first rank nations of the Earth now found themselves fielding large experienced armies equipped the most modern and deadly tools of war but with no apparent enemy to use them against. It wasn’t long before the newly designed war machines became the centre of a great arms race with every country attempting to outstrip the others arms production in an effort to become the most powerful. In this atmosphere mistrust jealousies rapidly developed and it wasn’t long before the Great Steam Wars of the late 1870s erupted into life and engulfed whole continents!

The two Great Empires with the most at stake in this period of expansion into the Dark Continent and the Orient were those of the British and Russian Imperial Families. Relations between Queen Victoria and Tsar Nicholas I were on the face of it cordial but below the surface they both envied and feared each other’s expansionist policies. Both countries governments laid plans to win this ‘Age of Imperialism’.

In July 1877 with Russia battling the ailing Ottoman Empire in the Balkans the British took advantage of their distraction with the infidels to claim vast stretches of the Dark Continent in the name of Queen Victoria, never had so many pygmie tribes been totally wiped out in such a short period of time in the whole history of mankind!. However the British were blissfully unaware of the machinations that were going on within the Imperial Russian Diplomatic Service and Military Intelligence. These branches of the Tsars Imperial Bureaucracy had developed a cunning plan to lure the British into a sense of false security keeping virtually the whole of the Russian Imperial Army ready to strike while a diversionary force dallied with the Turks. The Russians believed the pompous British would expose themselves by deploying the majority of their armies and navies on the Dark Continent with its worthless deserts and mountains and underdeveloped population and they were correct!

We go now to Wednesday August 15th 1877 to the picturesque rolling fields just north of the quiet Norfolk town of Knob End on Gaywood, this was the date and location of the first clash between the Tsar’s mighty 2nd Imperial Steam Division just landed on the English coastline and the hastily gathered men of the depot battalion of the 32nd Norfolk Mechanised Fusiliers supported by some territorials of the Knob End Engineer Company. A small crossroad which the Russian Commander General Dimitri Klebb deemed of vital importance for the supply network of his forces was where the first shots were fired and the first drops of blood were to be spilt! 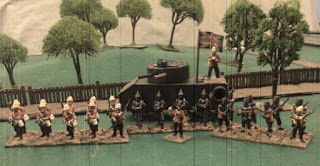 Next time  maybe a breakdown of of VSF figures, maybe an AAR who knows!
Posted by Captain Darling at 20:29