I built a Pulp Armoured Jalopy for testing the Mad Maximilian Car Wars rules and I thought to myself hey this is something the Evil Genius Doktor Von Hades could have created in Victorian times so here we go with a bit of double purposing...

Late in 1876 with the heat growing on Doktor Von Hades as the world's Intelligence Agencies increased their pressure on his Evil Organisation he decided he needed a more secure method of transport between his Secret Lair in outer London and his Secret Office/Laboratory in Chelsea! His daily commute by Cab through London's crowded streets was becoming more and more hazardous and on several occasions he became involved in low speed chases as his Handsome Cab was pursued by the Constabulary in their Black Maria's!

His solution to this was his Armoured Auto Carriage!

Over the Yule period of 1876 he designed and had constructed a horseless carriage for himself which was driven by his own clockwork system (which he patented) and could reach 12 miles per hour along London's cobbled roads. The mechanism driving the vehicle required a rewind only every 20 miles! The passenger's compartment safe behind thick armour was sumptuously fitted out in the finest calf skin and included a small drinks bar and smoking cabinet for its noted passenger. The driver not only steered the vehicle but fired the forward firing Rapid Fire Rifles when they were required. In the rear sat one of the Doktor's bodyguards and they manned the Turret armed with two 20mm Auto Cannons. The Turret was manually rotated using a system not unlike pedaling one of those new fan-dangled bicycles freeing the operators hands to elevate, aim and fire the cannons. To smooth his ride to the office Von Hades rimmed the outer edge of each of the alloy wheels with solid rubber bands using the finest imported products from South East Asia. The cushioning effect was quite noticeable! The body work supplied by a German Company run by a little known engineer Karl Benz. It was painted in a rich green colour with gold embellishments! The Doktor's Armoured Auto Carriage was a marvel of it's age and caused much consternation to the authorities who were trying to rid the world of his evil machinations

A picture of Doktor Von Hades and his driver Bill spending a lovely afternoon in the English countryside enjoying a spot of tea with the new Armoured Auto Carriage in the background... 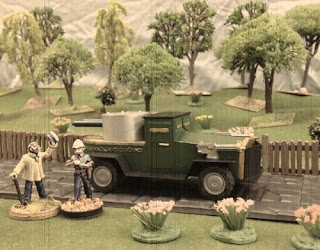 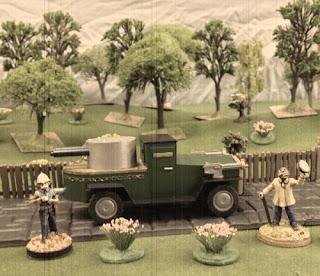