55 Days at Big Tinkle on Sea - A VSF Scenario

Well time for a Christmas FUBAR VSF game, I've got a mate maybe two coming over Thursday so we're on ...


The Armoured Steam Traction Engine and Battle Wagon Mk I Combination loaded with Christmas supplies for the children of Big Tinkle in on Sea photographed just prior to the Christmas Eve relief attempt of the besieged Port... 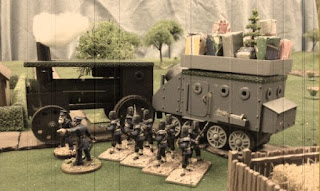 
In Late 1878 The First Great Steam War continued to drag on with no apparent end in sight and the great Western Democracies continued their battle against the Tyrannical Empires of the east. For the oppressed British citizenry of occupied territories the future looked gloomy. Alondside these people were the besieged and embattled residents of Big Tinkle in on Sea who continued to defy the invaders for Queen and Country! Their sleepy yet vitally important Port had been besieged by Russian and Prussian troops who were intent on relieving the populace of their freedom and using the docks to reinforce their invasion armies.

For over 50 days the siege continued and then on the 51st day with Christmas but days away a large Prussian artillery shell landed directly on and destroyed the hapless inhabitant’s only toy shop! It was the thin edge of the wedge, the starving children were facing a Christmas not only without pudding but also with no presents! This devastating news reached the ears of Her Most Gracious Majesty Queen Victoria who immediately ordered the Port relieved and toys to be delivered for the children! Volunteers from the Guards Landship Squadron stepped forward and organised a daring raid to penetrate the Evil Empires besieging forces from behind. This was their chance to tweak the noses of the Tsar and Kaiser while engaging iun the christmas spirit by delivering toys to the besieged children!

December 24 1878 on day 55 of the siege of Big Tinkle in on Sea the British relief force sallied forth just after morning tea. It broke through the enemy’s entrenchments with ease! While local British Militia and men of the 1st Naval Brigade tied down the Russian and Prussian infantry the steam powered units of the relief column made their dash for the Port. With Brigadier Gout aboard the Lnadship HMLS Clueless the armoured assemblage powered ahead at a majestic 8 miles an hour! At this rate Gout thought to himself they would be in the town square for a spot of lunch with the Mayor! Oh yes and in time to give the rug rats their Christmas gifts…

Meanwhile the besieging Commander General Guddenoff surprised by the British raid amassed all his available Steam Powered Armoured Wagons and launched them into action against the relief column as soon as their fireboxes were alight! The vehicles commanders, Colonel Fullovshtzhy and Major Von Bung-Fritz were given orders that not only were the toys aboard the British column to be denied to the local children but they were to be captured intact and sent back to their homelands for their own young folk! A race was on between the patriotic officers to secure the cargo first for their own Country’s youth!

The cast has been assembled and the stage set…”Action!” shouts the Director!

1st Speed Hit reduces speed to half
2nd Speed Hit Immobilises
1st Steering Hit is recorded has no effect
2nd Steering Hit Locks Steering
If stationary for a turn the Battle Wagon Mk  may fire its mortar, it CAN'T reload it
The Steam Blimps have one bomb each, it attacks with 6FP and hits on a 3+
The Steam Blimps HMG penetrate armour on a natural 6 up to full range, they have amour piercing bullets!
Captain Darling’s bomb hits with his bomb on a 2+
Captain Darling’s is immmune to breakdowns, he is after all a Hero!
There are no AA weapons in this game
There is a bonus secret British rule, that player alone will be informed of just prior to play!

Next time an AAR!
Posted by Captain Darling at 21:49