Scenery - Rope Bridges & A How to Scratch Build Them!

The upcoming Land of the Lost game requires several ubiquitous bits of specific Jungle Terrain the most iconic being 'rope bridges'! I need three for the game so how to make these suckers? I just went ahead and started making the first one and worked it out as I went. 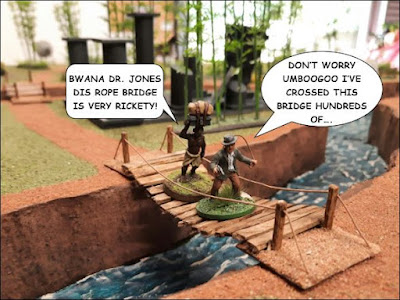 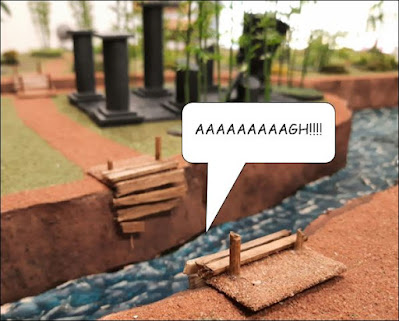 The 'How To'...
I didn't take pictures as I went  (DOH!) so added what I have where they're relevant!
1. Cut from sheet styrene two anchor points, make them the width of your bridge and them around twice the width measurement again for the depth.
2. Strip some electrical wire to bare the copper strands.
3. Cut 4 bits of the copper wire to the length required, i.e. the span of the bridge (allow for some sag) plus about an extra  centimetre extra.
4. Twist the lengths into two pairs.
5 Superglue the lengths to you bridge supports from step 1.
This picture shows the rope bridge at the end of step 5 and in the foreground are the roughly cut slats from step 6! 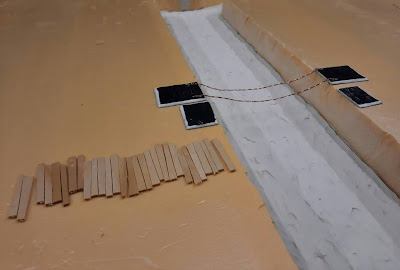 6. Cut out uneven slats for your bridge and the superglue them onto your 'ropes', I used pop sticks, ice cream stick, coffee stirrers whatever they're called in your neck of the woods.
7. From a wood coffee skewer cut four lengths, drill a 0.5mm hole in each just down from the top and glue them onto your bridge supports from step 1 in line and near the end of your main ropes/slats. I drilled a hole into the support base and glued them into there for extra strength.
This picture shows my first attempt at the supports I cut the hand guide rope too short though as it should feed through the skewer uprights and then anchor onto the support base, a later pic will show that! 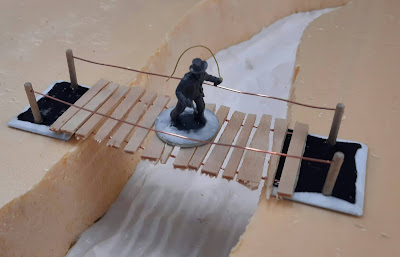 8. Cut two long lengths of the copper wire for the hand guide rope, feed them between the skewer support posts and anchor them at the back edge of the support base with superglue.
See here the hand guide ropes should look, sorry painting has already started. 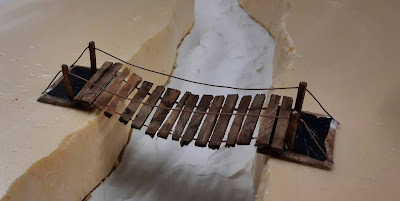 9 Paint as desired and you're done!
Looks great (even if I do say so myself)! 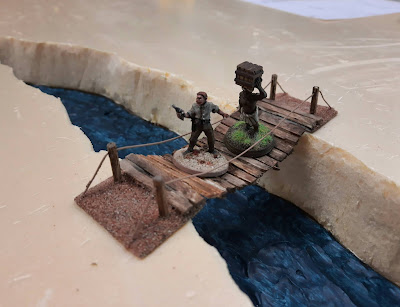 For game purposes, as you would expect there is a chance these rope bridges will break causing the Scenario Characters on said bridge to fall into the crocodile infested river at the bottom of the deep ravine I had to make a broken bridge. It used the same basic process as above... 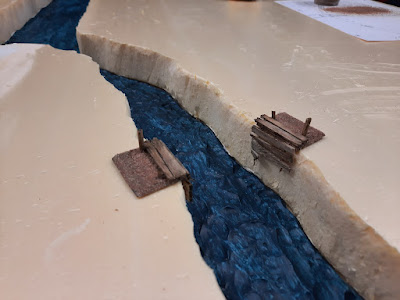 So there you go advanced rope bridge making covered, hope it may be of help!
Next Time; Explorer Broth!
Posted by Captain Darling at 09:37