The Affair of the Shooting Trophy

From Captain Darlings own memiors he described his departure from and return to the Colony of South Australia in these words:


“In March of 1861 I decided to pack up all my belongings resign from my various employments and begin my ‘grand adventure’ overseas. I announced to my friends and relatives I wanted to travel the world and broaden my mind thus ensuring I can furthering myself in Adelaide’s literary and social circles! With great pomp and pageantry and leaving many broken hearts I departed from Port Adelaide and sailed for Southampton from where I toured Europe and travelled back to Australia via Africa and Asia.
I returned in mid 1878 in response to the stories I had read in the newspapers that it was feared the Colony of South Australia would be invaded by the Russians at any moment. On my arrival back I patriotically announced that I had returned to the colony answering its call for every one of its brave young men to join the militia to protect their homeland and heritage. With my military background and experiences from traversing the Dark Continent and the Asian lands  I was able to secure myself a position as an aide on the military staff of the local South Australian military commander Lieutenant Colonel Downes.”


These claims by Captain Darling relating to the reasons for his departure i.e. to garner enlightenment appear dubios at best. What follows is a recollection from a private of the South Australian Free Rifle Corps relating to the good Captains experiences leading up to his departure in 1861 that bears this out:


“Ah you ask me of the circumstances of the depature of Captain Edward Darling from Adelaide in 1861, it was unfortunate but I could see it looming. I first met Darling when he joined the South Australian Free Rifle Corps in late 1860. I believe his motivations for volunteering were no more than to obtain a smart uniform to assist in making him even more irressistable to women than he already was, more a ladies man I had never before had the pleasure to meet! Everyone believed he would be no more than a dandy in military garb but he proved to be a good soldier and an expert marksman, he passed onto me the latter was the product of a misspent youth furnishing several of the local furriers with a great deal of stock. We in the unit were surprised when in January 1861 Darling appeared at drill in the uniform of a captain! Rumour was he earned his rank in a card game though he never disclosed the particulars of his rapid promotion through the ranks. He was very popular amongst the rank and file his generousity was renown and he was a true mans man but the other officers tended to look down their noses at him considering he was an upstart!
In early March 1861 a large shooting competetion was held, amongst the men of the South Australian Free Rifle Corps only Lieutenant Sutherland even came close to Captain Darlings shooting prowess and as was expected Darling walked away from the tornament with a splendid cup and a small prize. Mysteriously he did not appear at the afternoons award presentations or sit for the winners photographs he said he had been busy having ‘afternoon tea’ with one of the Mayors fine daughters. It was only the next day that the Mayor, Edward Bottle Wilbraham Glandfield a brute of a man uncovered Darling’s daliance and not only was his shooting title promptly recinded and the trophy retrieved from his possession but he was drummed out of the South Australian Free Rifle Corps and then literally run out of the Colony with only the clothes on his back!”


The doctored results of the March 1861 shooting Competition appear in the local press, Captain Darling’s name was conspicuously missing! 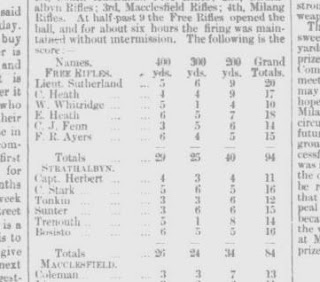 Coming Soon the Story of the Russian Invasion of the Colony of South Australia!
Posted by Captain Darling at 13:02