The Wheels Are Set In Motion

While the lazy summer of 1878/79 slowly drew to a close for the residents of the city of Adelaide in the Colony of South Australia sinister plans that had been made in the cold metropolis of St Petersburg were coming to fruition:

March 15th 1879 in the ‘Grand Audience’ room of the General Staff Building St Petersburg a large group of senior military staff officers and Foreign Ministry officials made themselves comfortable in the palatial surroundings for a presentation.
The Russian Foreign Minister, Prince Gorchakov entered the room and brought the meeting to order, he introduced two junior officers who stood beside him and bore the attendees to offer them their full attention for the duration of the meeting.

It was Colonel Ovsiannikov who spoke, he had a noticeable tremble in his voice as he was not used to speaking before such a prestigious audience, “Good afternoon Gentlemen.” he then gestured to the large map of the world behind him and continued, “Yesterday an invasion fleet departed St Petersburg and is en route to Vladivostok from there after a maintenance and loading layup it will continue to its final destination, the continent of Australia where it will commence the invasion of the British Colony of South Australia…” he was interrupted by gasps and many excitedly whispered asides from the audience.

His initial topic was the personalities who commanded this mission and the diplomats who accompanied it. The military men were all selected heroes of the recent great victorious war against the Ottoman Turks brave and experienced men who were trusted. No lesser person than the former Deputy Foreign Minister headed the diplomatic corps, they did not believe that the local government would be open to arbitration but as a matter of course an attempt to negotiate a peaceful surrender of the Colony would be carried out while the army landed and organised itself for action.

The Colonel now gaining in confidence outlined in minuscule detail the makeup of the fleet already at sea and the army units attached to it. It was of note that no artillery was included in the force to allow room for extra men and munitions to be included; the fleet would have the responsibility of supplying heavy gun support to the army if it was required. Also and of grave concern to some of those listening the extra munitions cut into the victuals stowed with the fleet, there was enough food for the army for the journey to the Colony but it was to rely on foraging to feed itself the moment it landed! Ovsiannikov noted here the invasion was timed to be close to the local harvest ensuring the captured crops would be able to supply the conquerors! The ships carried no horses or vehicles either once again it was expected these could be obtained locally. It was stressed bullets for the soldiers Berdan rifles could not be found locally so it had priority in the ships holds. Next there was the listing of the Siberian army forces converging on Vladivostok that would supplement the European units when the fleet stopped there for maintenance and resupply.

The discussion moved onto the follow up fleet, it was assumed that even though British Empire’s main focus at the moment was the Dark Continent with the size of the fleet they fielded the setting up and running a reliable sea supply route from the Russian mainland to Australia could not be guaranteed. Again there was disquiet in the crowded room but Ovsiannikov impressed on all the planning of this whole enterprise had been developed with this in mind. This second fleet which was already in the process of being organised would be a settlement fleet! It would not only ferry a much larger military force to the Colony but include many civil servants and volunteer farmers! South Australia was selected not only for its lack of seaward defences and small military establishment but because it could become a self-sufficient and easily defended bastion for Russia on mainland Australia which could survive in isolation and expand to the east and conquer the lands there using the professional Russian army’s training and experience and bypassing those other Colonies seaward fortresses. The second fleet would not sail before confirmation that the initial forces had been completely successful in their mission.

The expedition’s commanders had been instructed to act conservatively with the lives of each of their soldiers they would be of great value and limited in numbers, the army would be far for from their homeland and reinforcements and replacements could not be expected at regular intervals.

Gorchakov stood and hushed the frenzied conversations that had started at the end of the presentation and announced, “Gentlemen the wheels are now in motion for what is the greatest feat of arms Mother Russia’s armed forces have ever embarked on, the Tsar’s eyes are on us and we must not fail before his glorious gaze!”

The figure in the centre of the below is believed by one researcher to be the only known image of the Russian Colonel Ovsiannikov: 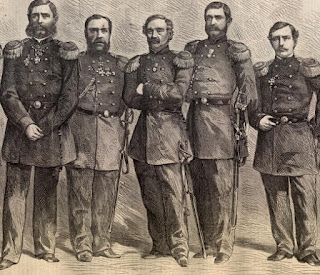 Posted by Captain Darling at 12:26