The Die Is Cast

The Russian invasion fleet cruised from St Petersburg to Vladivostok undetected by any major power and after a short stay in port to resupply and take reinforcements onboard it set sail for the Colony of South Australia! The trip was surprisingly uneventful until the ships neared their objective...
The first sighting of the Russian fleet in South Australian waters was made by an alert crewman on board the magnificent clipper ship the City of Adelaide. John Laverty noticed the armada steaming in an easterly direction through Investigator Strait to the south of the Yorke Peninsular. Captain Edward Alston was alerted and being an experienced mariner he knew a fleet of aggression when he saw it! The clipper that was cruising ahead of schedule was due in Port Adelaide on the 16th of August he told the crew and passengers with this development they would be there on the 15th! Full sail was deployed and the City of Adelaide hastened north east.
To the south west of the clipper on board the Russian flagship the General-Admiral Vice Admiral Lesovskiy shook his head as he watched the unidentified square rigger disappear over the horizon he wished he could intercept it but he knew all of his overloaded vessels with their fouled hulls had no hope of catching this 'hare'. He pondered that the fleet had slipped out of Vladivostok and sailed 1000s of miles unnoticed only to be revealed to the enemy on their doorstep. He cursed their ill luck!

The Russian leaders met an hour later and after a brief discussion they all agreed there could be no hope of the surprise landing that they had been hoping for. It was decided to slow the fleet so it would arrive on Sunday the 17th and start to disembark troops mid-morning, it was hoped that by landing at that time on a Sunday any alarm bells would be rung at the same time the local church bells would usually be ringing therefore they'd be less noticeable. An interesting stratagem to say the least!
Governor Jervios and Lieutenant-Colonel Downes met with Edward Alston from the City of Adelaide over tea and scones in the Royal Room of Adelaide Town Hall 11:00am on Friday the 15th. It was a congenial get together but Jervios and Downes left it in a haste to go straight into a meeting with the available members of parliament. This meeting continued until the early hours of Saturday morning.
Saturday morning August 16 saw the majority of South Australians going about their normal routines the minority on the other hand were frantically preparing for war! All the military units were alerted and orders issued for them to muster and converge at the parade ground in Adelaide as soon as they could. Steps were taken to prepare all the jetties for demolition and for the blocking of the Port Adelaide harbour entrance. The Governor and the rest of the parliament assured Downes that if there were any diplomatic approaches they would be rejected but only after any deliberations were as drawn out as possible to allow him more time to organize the defences.
Saturday evening after a surprisingly relaxed meal at Government House on North Terrace Jervios told Downes he was going to tell all he knew to the fourth estate so the people of the Colony would wake to the news, Downes agreed it was a good course to follow and promptly announced he was taking his leave of the Governor so he could begin a long night of jetty burning and harbour blocking! As he departed Jervios clamped his hand on the Lieutenant-Colonel's shoulder and said, "The die is cast, let us hope it rolls in our favour..."

This picture purports to be the Russian invasion fleet soon after departing St Petersburg: 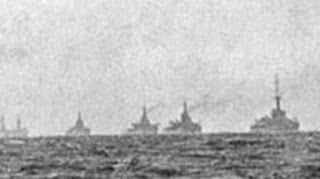 Posted by Captain Darling at 07:49