Well it’s finally ready for action the VSF APC better known by the British Imperial High Command as the Armoured Steam Traction Engine and Battle Wagon Mk I Combination. These two vehicles came about as I painted up some VSF Engineers and as often occurs one thing led to another and everything spiralled out of control and the next minute I’m building a tractor and its accompanying trailer! Anyway here it is the Victorian APC I hope you like it!

With The Great Steam Wars engulfing more and more countries in 1877 the British Imperial High Command came to the conclusion the elite Royal Engineers required an armoured conveyance that would allow them to keep pace with the new steam powered armoured vehicles now in service and also let them approach their objectives unmolested. With the military industrial complexes diverting all their resources to building Armoured Steam Wagons and Landships another source for the newly required vehicles was investigated. Four companies which specialised in agricultural steam engines and railway locomotives were approached with the below specifications (these are just the major specifications the full list including drinking water storage, minimum allowed head height etc included over 100 items!).

A steam powered vehicle is required which fulfils the below requirements:

A contract was issued to a Lincoln company, Ruston & Hornsby who can back with the novel idea of not a single vehicle but a steam traction engine with a separate trailer allowing for more flexibility than their competitors single unit proposals. Also by using their existing production steam tractor with armour added this allowed for virtual immediate delivery to the British military. The design of the trailer which received the title of Battle Wagon Mk I (War Wagon was often substituted by the troops) impressed the British Imperial Command so much they planned that eventually this armoured personnel carrier system would be extended to all foot units in a less specialised version, this of course would be only as budgets allowed for it.

The steam traction engine was as above one of Ruston & Hornsby existing designs with the conventional layout featuring rear wheel drive, front wheel steering, a forward boiler/funnel set up and the control compartment to the rear. An armour plate floor was added below the whole tractor, the cabin was fully enclosed and an armoured cowl was fitted to the front end.
Total Length 20 feet 4 inches
Hull/Body Width 9 feet 2 inches
Total Height 11 feet 4 inches
Top Speed 12 mph
Power Plant rating 22hp

With the new vehicle the Royal Engineers also received updated uniforms, these cobnsisted of a heavy dark blue serge tunic, reinforced leather pants, tall boot and topped off with a brass Minerva styled classical helmet! A couple of other items of note relating to their new uniform was; firstly the fabrics were impregnated with asbestos to help the men cope with the hot fetid conditions of the steam engines cabin and the battle wagons interior and secondly beneath their tunic they wore a composite metal and ceramic chain mail bullet proof vest. They were armed with, Light Rapid Fire Carbines, Galvanic Rifles and hand grenades making them amongst the most deadly of Her Imperial Majesties fighting units when compared man to man.

Tactical Doctrine for the Royal Engineers use of the Armoured Steam Traction Engine and Battle Wagon Mk I Combination was developed during training exercises on Salisbury Plain under the eyes of a group of experienced British officers. The doctrine basically boiled down to firing the large 13" mortar once at the units objective (it took too long to reload in normal battlefield conditions so a second shot was deemed an unsporting luxury), this was followed by a "charge" buttoned up at top speed to within dashing distance of the target at which point they would disembark and take their target, while the defenders being still stunned by the mortar round...easier said than done commented a sceptical Captain Darling once the documentation was completed to be submitted to the Imperial headquarters by the delegation of officers.

As an aside to the above Tactical Doctrine session Captain Darling was amongst those selected for this but he attended only fleetingly commenting as he prepared to returned to his active unit "I've allowed all the time I can here gentlemen there are enemies of Her Imperial Majesty that need their noses bent and backsides booted so I must attend to that promptly!" He was cheered by his fellow officers involved in the training exercises for his dedication to duty and ability to down gin in copious quantities!

Some posed photographs were taken during the Training Exercise on Salisbury Plain for Her Imperial Majesties edification here are a few!

This is a picture of Captain Darling posing with his fellow officers by the new equipment, notice the engine is still fired up and is belching steam! 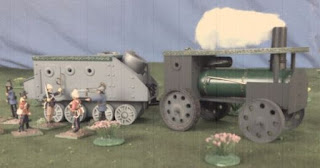 This is a test firing of the 13" mortar before the engine engaes top speed for a charge, the officer delegation can just be made out on a hillock in the distance: 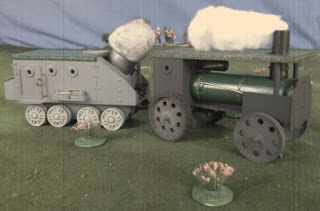 A series of pictures portaying the Engineers disembarking and capturing an entrenched artillery piece, the weapon is one of the new atuo loading guns of the Royal Artillery yet to be deployed operationally: 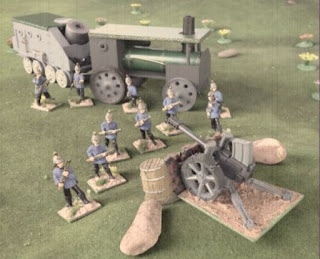 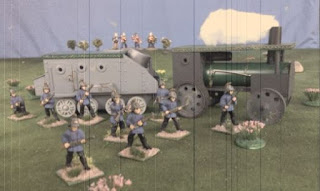 The Armoured Steam Traction Engine and Battle Wagon Mk I Combination setting a pulsating pace of 11mph on a rough track before the eyes of the officer delegation! 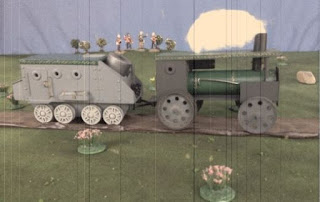 I hope reading this was time well spent. Next time more riveting stuff!
Posted by Captain Darling at 15:02