The VSF Red Baron Soars! AKA the TOBSEN77 Libelle Kit...

While the democracies looked to Captain Queensford-Smith as their hero in the sky the evil Empires too had a shining star frequenting the firmament over Europe and accumulating a toll of victories that all other airmen viewed with envy! The German aviator ace Baron Von Dueschbag otherwise known as the Red Baron because of the colour of his machines nose cone was accruing a tally of ‘kills’ with machinelike Teutonic panache. The deadly Barons flying contraption of choice was designed by a noted Dutch designer Fokker and it was known as the Fokker Dragon Fly Mk III. This particular flyer was not as fast as some of the newer Sopwith Blimps but was very manoeuvrable and supplied the pilot with a superbly stable firing platform. Also it was equipped with two rapid fire machine guns giving it double the firepower of most of the other flyers in the sky at the time!  Manfred Von Dueschbag along with his elite group of fellow German flyers shaped the great Fokker Scourge scare of 1878 when during September of that year they downed enemy avionic machines at a ratio of three to one a hitherto unheard of happenstance! The Military Leaders of the Democracies turned to the Sopwith Company to up the power and armament of their Blimps to counter this…


Below is a rare pictice of the 'Red Baron ' in action taken by one of his fellow flyers as he stalks an American built Wong Brothers flyer... 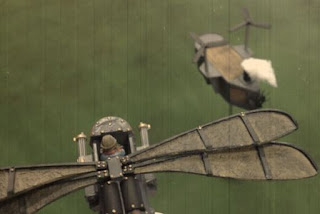 Well these ares the last of the TOBSEN77 kits I purchased recently and I think it's design is by far the coolest of the trio I selected…
The Libelle kit comes complete you get everything you need with this one so you have a pilot and armaments in the box!


Here’s what you get in the kit, from the TOBSEN77 site:

A few of my fuselage parts in this kit needed some filling and sanding but once that was done they went together easily. With the wings I could not figure out the best way to attach them so contacted Tobi and he gave me a good idea. I used a toothpick as a pin running through the fuselage attachment point and into the wings it gave them a solid point of contact to fix in place! A bit of paint and it was finished!
The only things I’d point out with this kit is like the others the stand is nice but low and also some guidance on attaching the wings would have been nice if included it didn’t matter as Tobi quickly supplied me with some pictures that helped me enormously! 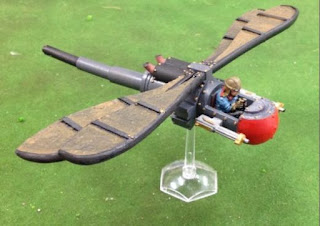 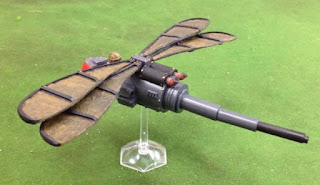 And here's picture of a Libelle with one of the Blimp 1's...

Hmmm so far dear reader this year I've been adding to my 28mm VSF collection big time but have only managed one proper FUBAR VSF game well that's not good! My 2016 game count currently stands at:

I think some more FUBAR VSF gaming is called for and soon by God!
Okay next time I promise an AAR!
Posted by Captain Darling at 20:54