The Charge of the Light Steam Brigade VSF AAR


German Gunners from the Grand Battery view of the approach of the Light Steam Brigade... 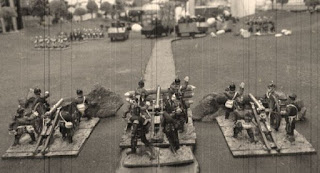 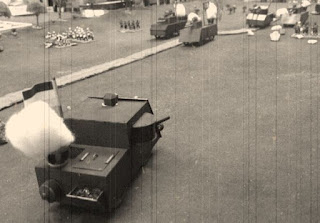 Charge of the Light Steam Brigade

Early March 1878 and the Germans were slowly edging inland from their beach heads along the coasts of south eastern England. The English Parliament was placing pressure on the Commanders of the Imperial Military Forces to launch a grand attack to sweep these foreign invaders back into the Channel. Lord Kitchener-Bun was hesitant to carry out any offensive actions because an attack at this point of time would interfere with the finals of the Bowls Tournament he was playing in. He was heard to say while playing ‘an end’ “Gentlemen, we have plenty of time to finish this Bowls Championship and still give those dastardly foreigners a damn good thrashing…”. Unfortunately for the Tournament a letter from Her Imperial Majesty forced the Lords hand and he issued a series of confusing orders to the regiments at the front. These orders included almost incomprehensible hand scribbled instructions on how to defeat the beastly Hun in detail.

At his Brigade Headquarters located in the Regal Hotel Ramsgate Lord Jersey was engaging the help of all and sundry to try to decipher the orders he had received from Imperial Command. They were so confusing some believed they were written in code instead of plain text! The general consensus though was that he should deploy the Light Steam Brigade to face and attack the German bridgehead located around Herne Bay and in light of that the order was given for the troops to deploy!

March 15th and Lord Jersey reconnoitred the German dispositions around Herne Bay and he noted that the only heavily defended valley to the south of the town was the one where the main north south roadway ran the Germans had placed most of their forces on the western and eastern approaches leaving gaps through which to charge. He dashed off a barely readable note for the regimental commanders to attack the Germans from the south stressing not to use the heavily defended valley as an axis of attack. He trusted the note to the dashing but dull Captain Bolan telling him to see the officers concerned and coordinate the assault in person.

Captain Bolan rode his mechanical horse to the front and waving the note he had scarcely read to address the assembled leaders of the Light Steam Brigade units who had gathered on the north south road to Herne Bay. He was excited beyond belief and with a wide sweep of his arm he roared…”There’s your objective Gentlemen take it and reap the riches of glory…”. He had gestured toward the German battery at the end of what was to become a valley of death!

The stage is now set for the charge to begin!

Game AAR
Turn 1 and the men of the Light Steam Brigade launched themselves northward down the restrictive valley towards their objective, Herne Bay. The German battery only had one heavy gun but it opened fire immediately!

By turn three several British sections on the left were falling behind the advance and one of the Armour Steam Wagons had been seriously damaged.

Turn four saw all the German guns engaged and more hits were scored on the lumbering British Armoured Wagons but none was fatal. Chance did do what the German Gunners could not though and Mk IX Wagon became immobilised as its suspension failed while traversing some broken ground. Having broken down with the Germans out of range of their guns the crew did what any true British in the same situation would do, they disembarked and commenced to ‘brew up’!

Turn five and the lead British vehicle suffered from a breakdown roll and burst into flames the rest of the vehicles ploughed forward and the infantry entered German small arms range receiving a hail of fire from both sides of the valley.

Next turn with all fires extinguished the Armoured Wagons pushed on firing as they went unfortunately with little success while the Germans reinforcements arrived. Their vehicle nick named Leviathan entered in a blaze of glory destroying one British machine and crippling another a great Hurrah rang out from the Huns line!

Turn eight and the British right pushed the German infantry from their fortifications and the Armoured Wagons edged forward duelling with the battery neither side scoring critical hits. Luckily for the Germans just as a boilover was on the cards the British Field Commander, Colonel Washboard was struck down by a Hun round triggering off a morale check for all the British foot units! Three out of the six sections failed and half of the attackers started fleeing down the valley from whence they came! To balance this turn of events a shot from a British Mk II Armoured Wagon knocked out the Leviathan to help steady the red coats.

During turns 9 to 12 all the action was on the flanks as the Armoured Wagons took further hits but continued to grind forward. On the British right the Germans briefly recaptured their defensive position before being virtually wiped out with their robots by some rallied British infantry and their armoured compatriots. The left flank saw two foot sections encircle the German infantry and finish them off in a bloody melee, a single Hun was sent to the rear after surrendering.

Turns 13 to 15 were the final phase of the battle the last two British mobile Armoured Wagons both carrying damaged continue to move toward the German battery as three sections of infantry took it on in a vicious melee from both of its flanks. The Huns gave as good as they got but soon the British secured the battery. As a testament to the ferociousness of the fight amongst the guns the bodies from both sides were stacked high.
There were three rousing Huzzahs on turn 16 from the remaining surviving foot soldiers as their Armoured Wagons lumbered off toward Herne Bay and glory!
Some Pictures of the action…


The action begins, the positions after just one turn as the Light Steam Brigade begin their advance down the valley of death...dadadadaaa 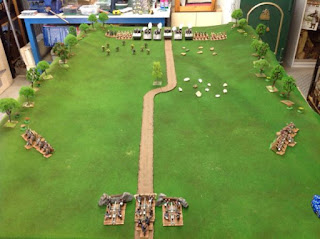 Turn 4 and a Mk IV Steam Wagon breaks down in the broken ground, their day is done... 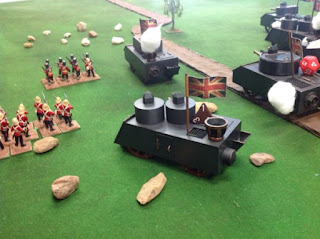 Situation at the end of turn 5 the British left is falling behind, a few bad activation rolls there! 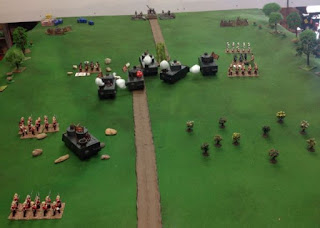 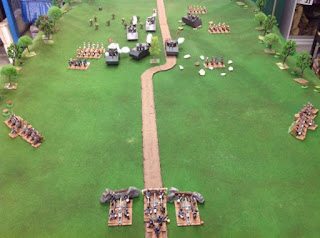 The German left buckles and flees lucky the Robot reserves have arrived! 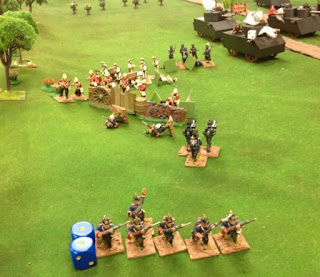 Turn 8 and the British Commanding Officer bites the dust! 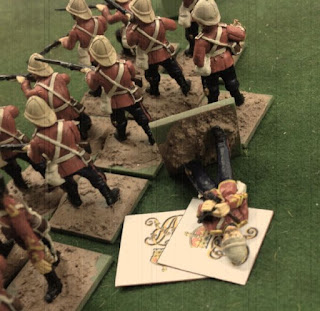 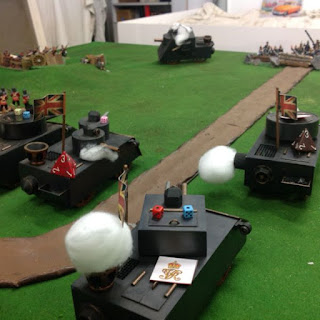 "For you Box Head the war is over!" The last survivor of the German right flank is escorted to the rear, British troops often refered to their German counterparts as Box Heads the origins of this are not clear oh and I should get some unarmed figures to represent prisoners one day! 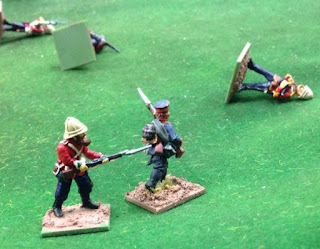 The battlefield at the games end...quite a bit of carnage! 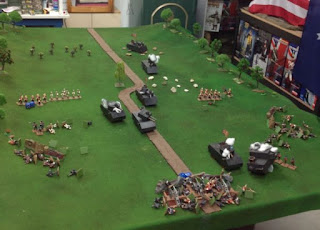 A period picture of the climax of the battle the Grand Battery has fallen HUZZAH!

An interesting aside Captain Bolan was struck down by a shot only moments after giving the order for the attack, given the distance to the front line many still speculate that the shot came from a soldier of the 55th a unit know to dislike the new steam powered machines that lumbered across the battlefields favourites of Captain Bolan…

Right I must write up the Stanley’s Redoubt AAR and then get onto some more VSF...
Posted by Captain Darling at 21:34