I wanted to try my Little Wars FUBAR VSF scenario during one of our Monday night soirees since there’s no Little Wars here in Adelaide this year. This game pits a superior Martian Tripod against a Human forces featuring Armoured Steam Wagons, Guns and an Aeronautical Conveyance so there’s lots of variety and hopefully it looks the business! The objective is simple the Tripod needs to cross the length of the board and exit from the opposite side to which it entered.

Period Photographs of the action between Flying Column Z and Martian Tripod X... 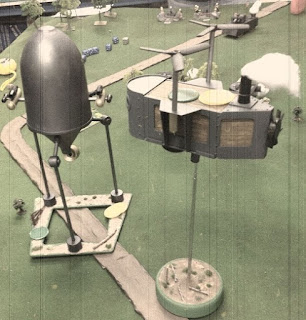 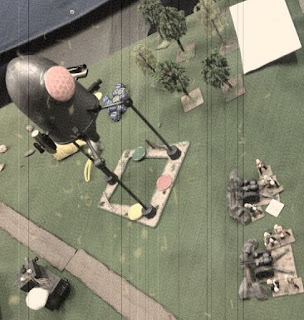 During the summer of 1875 the (evil) Martian Tripods ravaged the England countryside laying waste to everything that crossed their paths impervious to anything Humanity fielded against them. Unbeknownst to Alien Invaders Her Imperial Majesty’s finest troops were being equipped with the latest weapons of war fresh from docks of Liverpool and supplied by the United States of America. With these modern machines of war the British planned to put an end to the Martian Tripod’s rampant destruction of their homeland!

On June 22nd five Martian Tripods were identified converging from different directions on the small Essex village of Little Tinkle. They were being shadowed by Troopers from the 5th Steam Powered Hussars using the latest Marconi Wireless Sets to keep their superiors "in the know" as to their activities. In response to this information foreshadowing a coming together of Martian Tripods the British Imperial High Command dispatched their elite Flying Columns to intercept them. One Martian Tripod was hard enough to deal with let alone several working in coordination! Every effort had to be made to stop the Martian Machine’s joining into a united force!

Just to the East of Little Tinkle Flying Column Z commanded by the highly decorated Colonel Puddin and comprising of elements of the Queens Own Steam Dragoons and a Flyer from the famous 266 Squadron came into contact with their designated enemy unit known to them as “Tripod X’. The Colonel roared the order to attack but his further words of encouragement were drowned out by the thunder of steam engines powering up…facing the British on the other side of the battlefield with its unblinking red eye glaring ominously on the metallic monster from Mars glided effortlessly forward…the stage was set…the battle began…

Victory Conditions
Martians: get the Tripod of the opposite edge of the game table to which it starts within 12 turns any damage is irrelevant.
Humanity: to prevent the Martian Tripod completing its objective regardless of losses.

Special Rules
Use the Custom Tripod Rules (Posted on the Blog 10/2/2016)
http://captaindarlingsminiaturesemporium.blogspot.com.au/2016/02/fubar-vsf-rules-martian-tripod-updates.html
Once any Human vehicle has all of its weapons out of action it is eligible to ram the Martian Tripod!

Initially both sides advanced to make contact but the British fell afoul of technology early in the game and one of their Armoured Steam Wagons suffers from a boiler malfunction and the ultra-advanced super high pressure steam turbine power plant explodes, the sickening roar was heard far and wide and was a bad omen for the men of the Queens Own Dragoons!

Meanwhile the gallant boys of the Royal Avionic Corps flew their Wong Flyer directly toward the Martian Fighting machine to cover the advance of the Dragoons. Their plan worked and they took the lion’s share of the Tripods early rocket fire while its deadly heat ray targeted the Armoured Steam Wagons.

While the Steam Wagons survived hit after hit the unlucky crew of the Wong Flyer had their Tesla gun knocked out by one of the Tripods rockets. In stout British fashion these gallant fliers decided to do their all for Queen Vic and steeled themselves to ram the Alien invader!

The Martian Tripod moved slowly forward but despite firing salvo after salvo at the Wong Flyer was unable to shoot it down while the British armoured skilfully used the cover of a copse to take pot shots at the Martian while taking cover as they reloaded their guns!

Finally the British were able to manoeuvre there flying contraption into a position to ram and twice they flung themselves at the metallic giant! Both attempts failed to damage the Martian machine as they were glancing blows unfortunately the accumulated damage on the Wong Flyer caught up with it and it crashed from the sky the crew perishing in their brave attempts to save Humanity!

With the pesky human flying machine out of the way the Tripod now pressed forward but was not getting everything its own way it had accrued a large amount of damage on its mechanical legs, one rocket pod was put out of action, its heat ray was no longer operational and a third of its smoke projectors were damaged. This was a close run thing!

In a last gasp two British steam Wagons their guns no longer operational also tried ramming the Tripod but without success and both were immobilised.

After successfully overcoming the British gunners the Martian Tripod successfully continued on toward the village of Little Tinkle!


Early turns saw the Martian Tripod stand back trying to use it long range gunnery to eliminate the human resistance. Note in the bottom left of the picture the British ASW that broke down! 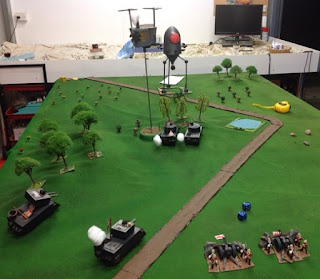 The Martian Tripod stands back while the men of the Royal Avionic Corps charge there flyer forward! 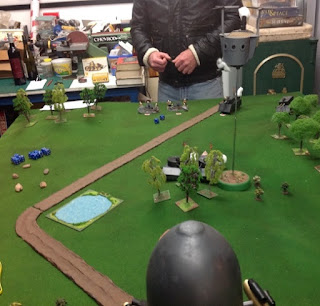 The Gallant British try to ram the Martian Tripod as their Tesla Cannon was knocked out rendering them weapon less! 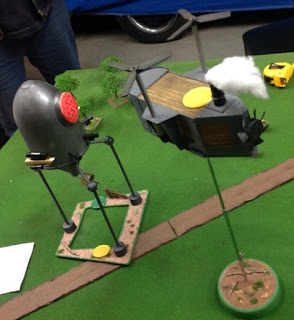 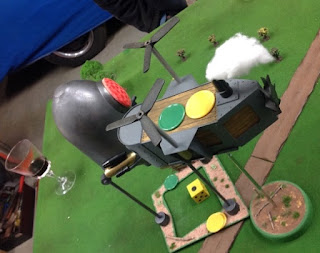 The British aerial contingent is down! 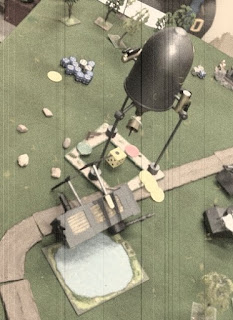 The end game the Martian Tripod has all but defeated the humans, the gun crews are all dead and only two crippled Armoured Steam Wagons oppose it! 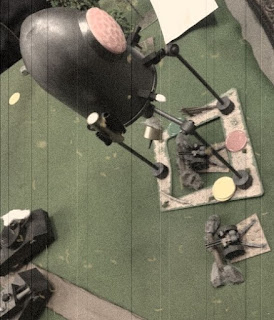 The Tripod spins its armoured head around in disdane to survey the wreckage on the battlefield as it moved off toward Little Tinkle! 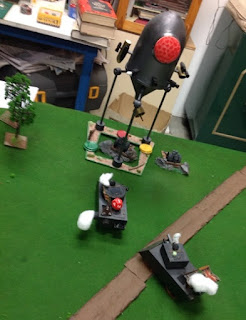 I did not enforce the time restrictions on this game and this allowed the Martian to leisurely take on the Humans from long range that was my BAD and won’t do that again next time!

Regarding the rules one nay sayer in our group moaned endlessly regarding the FUBAR VSFs activation rolls and also the vehicle ‘Breakdown Table’. At one stage he said he need do nothing and eventually all his opponents vehicles will breakdown. Well I reckon rules without any sort of Command Control lose a lot during a game as every unit does exactly as you want and I would love to investigate the breakdown ratios of early tanks and planes with their ‘reliable’ petrol and diesel motors during the early 20th Century but life’s too short. I can just imagine what the first steam vehicles reliability must have been like. Anyway this is water off a ducks back as far as I’m concerned the FUBAR VSF rules have always given me exiting and out there games so I’ll continue to use and endorse them…

Next time we go back to the Great Steam Wars…or perhaps the Imperial Russian Invasion of South Australia I am not sure!
Posted by Captain Darling at 18:35