Okay I've finally got off my butt and put together the stuff I have on game Four of my 'The russians are Coming' Campaign...this is about a year old!

so these are the set up details and special rules for the fourth of the The Russians Are Coming campaign scenarios. A map of the play area is included. Please feel free to try this scenario yourselves (you may have to adapt it for your rules I am using an adaption of State of War) and if you do please let me know how you go!

A period picture of Sergeant Bruce's 'Boys' manning the Palisade on Port Road the day prior to engaging the 'Ruskies':

1 Army Officer (Captain Pushkin)
Four Army Units each of: 1 NCO and 7 Privates
One Cossack Unit of: 1 Leader and 5 Troopers

South Australians: The Picket Duty unit starts anywhere within 5cm of the Palisade and the other two other units enter anywhere along the south-east edge Turn 4

Russians: All units must enter Turn 1 on the north-west edge

* Turn 1 the Russians have the ‘initiative’
* Russian have played their 'Staff Officer' option in this game morale effect for this are in play
* Cossacks can't use formed line and if their unit’s leader is killed they maintain skirmish order and move at half speed
* Cossacks may be up to 20cms from their leader
* The "hills" are actually rolling ground they block line of sight and give those on them melee and shooting advantages but cost no extra movement to climb as the slopes are gentle
* The rough ground areas cost double movement when actually traversing them and offer no cover
* The Fallowed fields cost double movement when actually traversing them in line only skirmish order troops unaffected and offer no cover
* The dense scrub areas cost triple movement when actually traversing them and offer no protection
* 'Lone Pine' offers light cover if directly behind it in the line of fire or melee
* Stanley’s Redoubt (the palisades) is hard cover and blocks line of sight unless the figure is adjacent to it.


Below is a map of the battlefield drawn by one of Lieutenant-Colonel Francis Downes staff the day after the action was fought including a Legend: 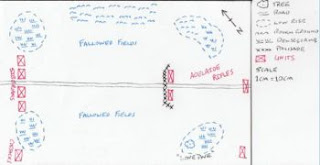 The "historical" AAR will follow Tomorrow!
Posted by Captain Darling at 13:39