Campaign Game 5 - Hills Are For Heroes

This is the background to the fifth of the seven scenarios of the 'Russians Are Coming' campaign I'm playing through following a hypothetical Russian Invasion of the Colony of South Australia. This is a meeting engagement as both the South Australian and Russian forces attempt to occupy a piece of high ground to the west of the City of Adelaide, it's day ten of the invasion...


A picture of Staff Officer Putin posing with one of the invasion force's Gorloff guns manned by naval personal. Note these "Gorlov" Guns are actually British made Gatling Guns with Broadwell Drum magazines and ammunition bought through arms dealers in Hong Kong while the Russian army was preparing for the invasion at Vladivostok. 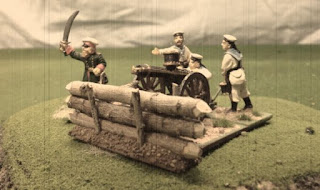 Much of the terrain between the Russian beachhead centred on Henley Beach and the City of Adelaide was relatively flat and underdeveloped lowlands. This meant that any piece of high ground without regard of its actual elevation was invaluable to both sides.

With Port Adelaide secured and Russian fleets remaining warships, the ironclad Petr Velikiy and two monitors Admiral Spiridov and Admiral Chichagov now past the block ships and safely within the confines of the harbour Lieutenant-General Lazarev began rolling out his plan to envelope the City of Adelaide and wear down the defenders. Beginning Monday August 25th his army launch strong company strength sorties to the north and south of the City of Adelaide. These raids targeted farms, rail lines and telegraph poles and their cables with the intention of drawing the defenders out of their cover so they could be engaged in open ground and defeated piecemeal. Lieutenant-Colonel Dawes however do not take the bait and held his troops back preserving them while the Russian's exertions were wasted.

During the nightly Russian Command Conference Laverez let all know he intended to change tactics and start to drive the South Australian defensive perimeter in with assaults this way their militiamen would be force to engage his regulars and they would be defeated in detail. To help facilitate this he decided that all the high ground that was unoccupied and overlooked of the South Australians was to be captured forthwith. He reasoned such positions would be invaluable to cover the advance of his troops on the South Australian defensive line surrounding Adelaide as they could act as observation posts for his ships forward observers or be ideal positions to locate his fearsome Gorloff guns.

One such small elevation that drew the attention of the Russians as it had a controlling view of Lieutenant-Colonel Downes South Road defensive line was Bill’s Hill. It was in fact not a hill at all but merely a low rise, still it was noticeably higher that all the surrounding terrain. The 'mound' was man made with the dross from the nearby fields and the South Road excavations. It was known as Bill’s Hill simply because it was located on William Copley’s farm, William was popularly known as Bill! The summit of Bill's Hill though not very high with gently slopes running down from its apex in every direction so it would be an easy location to occupy as it was undefended.

A detachment of regulars led by Staff Captain Ivan Putin from the combined East Siberian Rifle battalion was assigned this task of occupying Bill's Hill. It is interesting to note that even in this relatively early stage of the campaign to make up for shortfalls in troop numbers sailors from the fleet vessels were being incorporated into units to flesh them out so Captain Putin's command included a section of such troops. Jump off time for his men to launch their attack was Wednesday August 27th at noon!

At the same time as Lazarev decided to send troops to capture all the high ground surrounding Adelaide's defences including Bill’s Hill Lieutenant-Colonel Downes had coincidentally decided that this elevation was of importance to his defence of the City of Adelaide. Orders were drafted for it to be occupied, fortified and artillery to be emplaced post haste!

Wednesday dawned hot and as the sun reached its apex the heat of the day increased. The thirsty and sun burned soldiers of the East Siberian detatchment may not face any defenders but they still needed to move forward under the eyes on a well-armed enemy force which they expected would attempt to interdict their advance in every means at their disposal. They did not expect they would become engulfed in a tense engagement with the South Australians which was exactly what was about to occur. As Putin the Russian commander signaled his men to advance with a shrill tweet from his whistle the South Australians from the blooded Unley Rifle Company that had been skirmishing with the Russian for over a week now and supported by the fresh and eager men of the Norwood Rifle Company, noted for their flamboyance and élan began their advance on Bill's Hill too. The time the South Australians planned to move out and establish their defences on the mound was noon as well!

Next Time the Scenario Set Up Details for Hills Are For Hero's!
Posted by Captain Darling at 21:22