Here are the set up details and special rules for the fifth of the The Russians Are Coming campaign scenarios. This game won't require more than a single play test I hope as its a situation I've used several times before. A map of the play area is included. Please feel free to try this scenario with your rules (I am using an adaption of State of War) and if you do please let me know how you went!

South Australians: All units must enter Turn 1 along the eastern board edge

Russians: All units must enter Turn 1 along the western board edge

At the game end count up the number of figures each side has within 25cm of the 'marked centre' of Bill's Hill the side with most wins, if it's a draw the side with fewer wounded figures wins, if that's a draw extend the distance by 10cm and repeat the count keep doing this to you get a result. On the extreme circumstance this still results in a draw still roll a die (reroll ties) until someone wins!

* The Russians have played their 'Staff Officer' option in this game morale effect for this are in play
* Figures on the hill may spend an action to go prone and when prone they increase their protection from fire by one level but melee against a standing figure at -2, it takes one action to get back up again
* The Bill's blocks line of sight and give those uphill on them a melee advantage, it costs no extra movement to climb as the slopes are gentle
* The rough ground areas cost double movement when actually traversing them and offer no cover
* The dense scrub areas cost triple movement when actually traversing them and offer no protection
The map below of the battlefield deployment compiled from dispatches regarding the battle issued by Lieutenant-Colonel Francis Downes staff including a Legend: 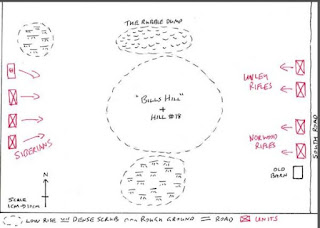 Next time the Hills Are For Heroes AAR...
Posted by Captain Darling at 06:54