Just finished painting up a new set of figures a fully armed Cricket team! They were released quite a while ago but I only just saw them online recently so had to buy them! They’ll be useful in both my VSF and TGAA games!

You can buy them as a 'full' set of 12 figures including 11 players and an umpire or in subsets of six, one called the Gentlemen and the other the Players a bit odd as except for the Umpire they are all players!

Once I had them in my hands I was impressed, these are nicely sculpted miniatures with great character faces and good body poses. The guy bowling for example looks very good! My favourite is the Vice Captain in his Jacket nonchalantly standing with his SMG in a sort of gangster pose. The only thing a bit odd was a couple of the slung rifles sort of bend with the shape of the body of the figure (obviously these Enfields were made with softwoods...) All the figures required clean up with various amounts of flash here and there something that took me back a bit but once tidied up they were easy to paint.

Speaking of painting for these fellows I chose a brighter white for pants and shirts and a creamy white for jumpers and pads. Caps and jackets were a sort of Australian Green. The faces need finishing up, currently they are simply flesh with the only highlight being on the moustachioed figures, hopefully I’m catching up with a mate I game with over Christmas who is great at painting faces and maybe he’ll be able to impart some of his skills to me! The bases were simple, these chaps would be found on the finest ovals so as simple green flock mix was all they needed to represent the finely mowed playing surface!

Here’s some pictures...unfortunately the colour difference between the bright white and creamy white is hard to see!

From how I see it these figures would be left to right; the Captain, the Vice Captain, an Umpire and the Wicket-keeper 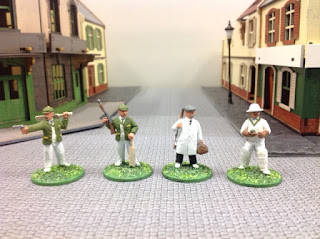 These figures would be left to right; two Fielders, a Bowler and a Batsman 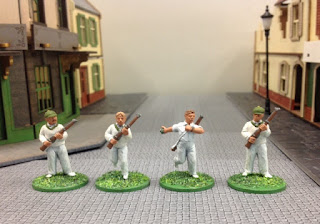 These figures would be left to right; a Batsman, two Fielders and another Batsman 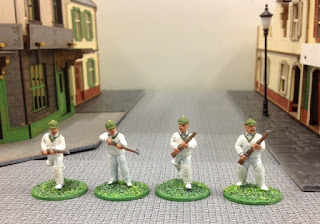 Note I almost bought them through a third party but went to Sloppy Jalopy direct and their site was user friendly as was their shipping to Australia! Here’s a link to their site...

If you need some cricket miniatures armed to the teeth I’d highly recommend these!

Next Time; err more stuff!
Posted by Captain Darling at 12:35