Ah Yuletide, this of course means a FUBAR VSF game with a very Christmas theme! We gathered for a casual BBQ and game. This time we tried to fill the table with a veritable plethora of steam powered contraptions, everything from Flying Machines to Automatons!

The British objective is to relieve Balloon Mobile troops landed behind enemy lines before the local Germans, believed to be nothing more than rear echelon soldiers could overpower them! The plan devised was exciting and adventurous but some officers of the Imperial Headquarters critised its wisdom and scope one scandalously commented in a darken corridor could the plan be endeavouring to go 'A Christmas Tree Too Far...' 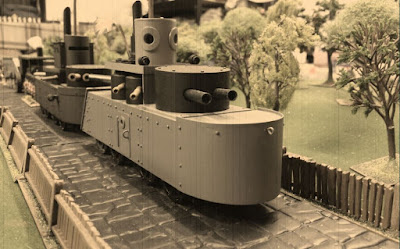 Infantry followed in the wake of the awesome Steam Leviathans! 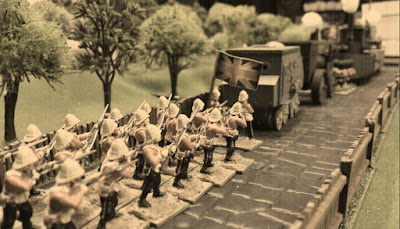 Lord Butt-Plug and other officers from the Imperial Headquarters view their Landships and associated support troops advancing... 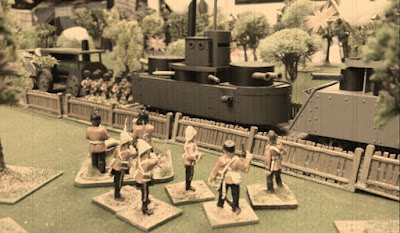 A Christmas Tree Too Far...the history;

Late 1878, the great Western Democracies continued to fight the evil Eastern Empires in second year of the First Great Steam War with little sign of a conclusion when a daring plan was presented to Queen Victoria’s General Staff which if successful could lead to the defeat of the German Empire by Christmas. The plan was promptly approved!

S.O.E. (Stealthy Overseas Executive) had via their network of agents identified a weakness in the Imperial German Army. They discovered during the Yuletide period the Teutonic Warrior’s morale was fragile at the front and the Imperial High Command needed to cosset the soldiers with a wanton excess of treats during this time to bolster them. The central item distributed to the Units was a generous supply of Christmas Trees! The Top Men of S.O.E. believed if the deployment of these trees to the front could be interrupted then the German Army's morale would collapse in days.

A plan devised by Lord Butt-Plug that envisaged a daring thrust by the British 30th Steam Powered Armoured Brigade through the Holland to capture the three Great German Christmas Tree Depots. To ensure the Germans could not move the Christmas Trees from the supply centres detachments from the elite British Balloon Airborne Corps would be landed behind the lines to secure the depots for the men of the 30th Steam Powered Armoured Corps. These depots with the Christmas Trees were located at Eindhoven, Nijmegen and Arnhem!

December 17 and the Operation began. The attack achieved total surprise and Eindhoven and Nijmegen were quickly secured but then ‘the wheels fell off’. Unbeknownst to the British the Imperial German Army had located strong forces at Arnhem to practice their caroling for Christmas...when the crack Balloonists of Captain Jack Snow’s 1st Air Deployment Section landed near Arnhem the Germans buoyed with pudding were awaiting them and were ready to secure a decisive victory promptly so they could return to their caroling... 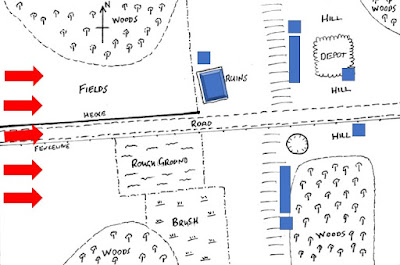 Victory Conditions
British:
Eliminate 3 man Depot Security Detachment and have at least one figure in the Depot at the games end
German:
Prevent British Conditions

Force Morale:
If at any point more than half of a sides total number of Infantry/Gun Units are Broken then that side is Routed and loses the game.
Note: the Umpire can override this rule and substitute a -1 die roll modifier on ALL the Routed forces Units rolls instead of game loss result

Guns are stationary and can’t be moved.
Ruined building – this is a fortified location giving Heavy Cover to occupants.
Woods don't affect movement rates of foot units or vehicles but vehicles require an extra i.e. second breakdown roll.
Woods can be seen into to the range of 6 inches and give Light Cover bonus.
Fences/Hedges are ‘a hindrance’ and infantry can be seen up to six inches through them and vehicles are seen at any range through them but both get light cover bonus for the hindrance.
Rocky and plant areas don't affect any movement rates but vehicles require an extra i.e. second breakdown roll.
Rocky and plant areas infantry light cover. 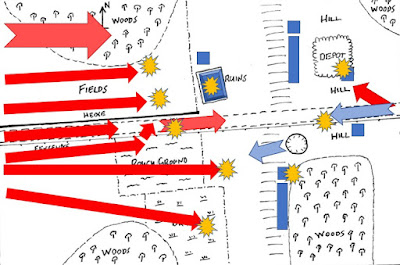 The British decided to 'go for it', their commander unaware if Captain Snow's Balloon Section were still in action and with time against them a direct assault covered by the big guns of HMLS Terrific seemed a sound plan. the ruins could be occupied and used as a launchpad for the final attack on the depot! The advance was sounded! The big guns of the Terrific belched flame and smoke and caused casualties to the entrenched German gunners whilst the infantry merrily stomped forward in haste!

Here the might of the British advance, the green disks on the sections to the left of the road show they are in overwatch, units failing their activation roll can choose to do this. 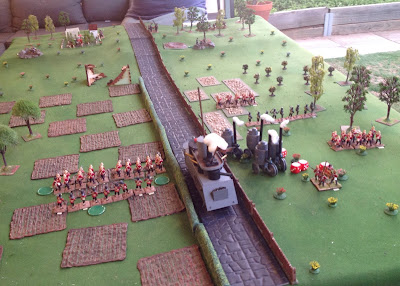 The German guns targeted the British vehicles whilst their elite Marines held their fire until the British moved to within effective range of the Galvanic Rifles and then they loosed of repeated deadly volley!

The British right with better activation rolls advanced much quicker than the left who's objective was the ruins. The road was quickly blocked with Steam Vehicles! 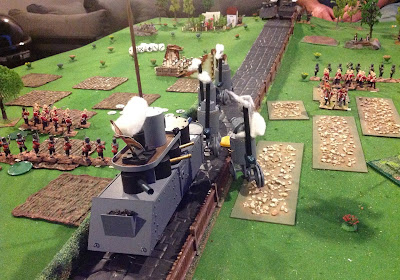 The Germans own Steam powered Armoured Wagons arrived and targeted the British Triambulators! Meanwhile the British Blimps arrived over the battlefield but were hampered by some poor activation rolls! 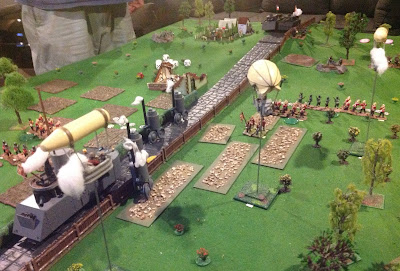 The British left was virtually wiped out by the German Marines in the fortified ruins while the British fire back at the Germans while effective was causing many less effective hits.
The silver markers to the left of the road below are proof to the German marines effectiveness! 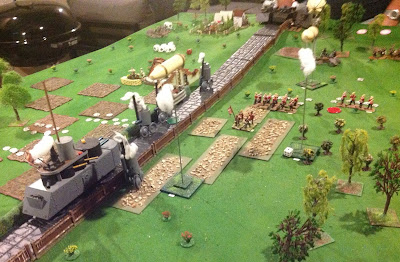 The British army was faltering at this point as they were under withering German fire from both the left.. 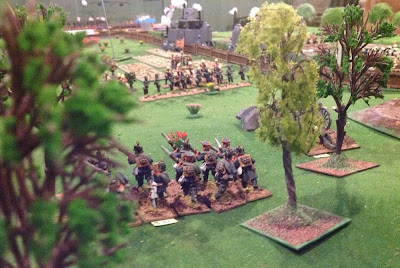 and right of the road... 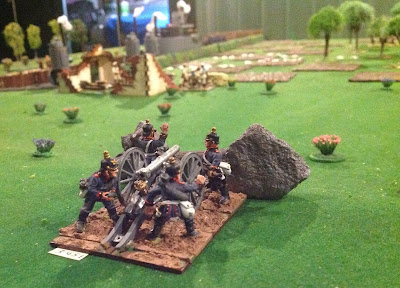 At this crucial point of the game the Germans ran afoul of the infamous Breakdown table with two of their vehicles were put of action and the third was crunched by the big guns of the HMLS Terrific which at this point was still too far back to bring all its might to bear!
To top off it off for the British captain Snow and his elite balloonist arrived behind the Germans near the Supply Depot!

In this picture you can see the three German Steam vehicle wrecks littering the hilltop and Captain Snows 'boys' and the empty Depot sentry box after the balloonist had put paid to the guard detachment! 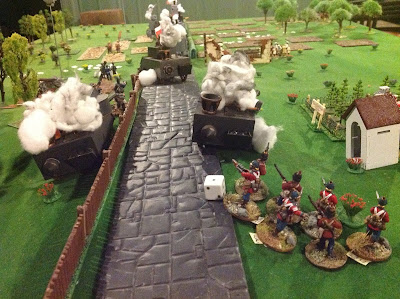 The swings and roundabouts continued at after the Germans took a beating they played their trumps, two Dragonfly avionic flyers and a section of Automatons! All game due to heavy losses the British were riding a fine line and seeing their army morale break well the Boxeheads aerial and robot led counter attack was enough to force the British over the limit! In a hail of bullets form the air and smoke a flame from the Automatons red line broke!
A German Victory!

The Automaton section can be seen in the centre of the picture and the empty space in front of them is where the British had just moments before been advancing! 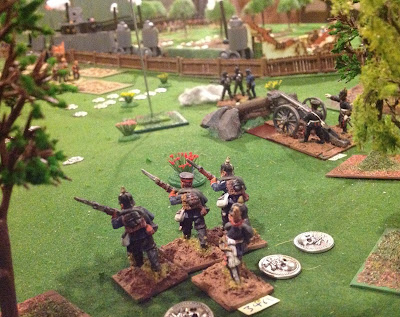 The German Dragonflys with their twin Rapid Fire Rifles were deadly against infantry in the open! 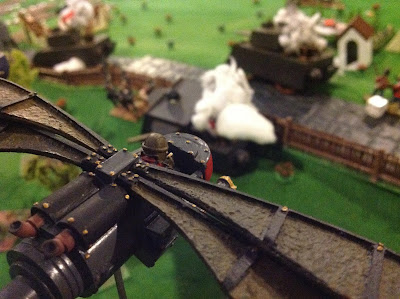 British Flyers circle over their shattered men of the 30th Steam Powered Armoured Corps helpless as they continued to roll poorly when it came to activating. 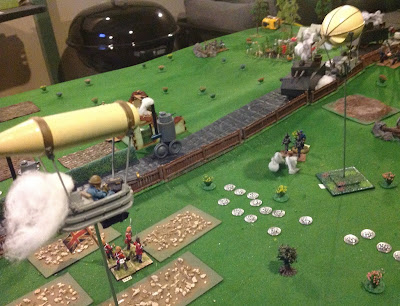 Captain Snow and his brave Balloonists even though undefeated had no option but to surrender to the Germans and endure a horrendous extended period of guttural German caroling all the way through to Christmas day!

Snow's Section watch helplessly as despite their success the British relief column breaks and runs! 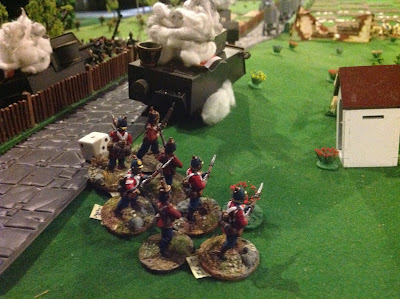 Well an interesting night was had! There were many buts for the British, had they advanced the HMLS Terrific more promptly had their Flyers activation rolls been better it all could have been different...well it wasn't! The tenacious Germans had their own dice issues especially with the Breakdown table taking two of their vehicles out of the game but they came through adversity victorious!

There'll be more FUBAR VSF soon in one of our regular Monday gatherings and i am sure it will go down as well as this game did!

Next Time - hmm we may revisit 'the Russians are Coming' campaign!
Posted by Captain Darling at 17:16