Well Little Wars Adelaide 2019 is done and dusted! Overall looked as if it was a huge success. Talking to the top dog the number of games and traders was an all-time high. The crowd did appear less than the last time the show was run though. 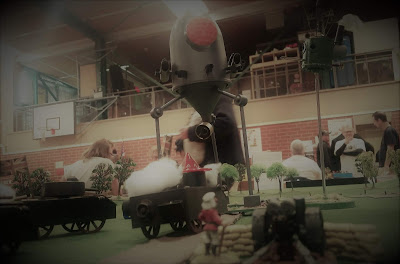 From my point of view, it looked to be a very successful event! It was good to see a huge variety of games in one location. Also having interstate traders in town so you can see their wares ‘in the flesh’ (so to speak) is very nice!

There were only a few games I was interested in having a go at this time but as my War of the Worlds FUBAR VSF Table was so busy I didn’t get a chance! These included a game on the Glenrowan Siege (Tribal Rules), A Gladiator game (Tribal Rules again) and a game covering a colonial battle set in Adelaide Australia (TMWWBK Rules).

Luckily, I have arranged with George who ran the Glenrowan Siege game featuring the Kelly Gang to catch up with him and have a go at it one evening soon...excellent news!

Regarding Traders I picked up only a couple of items (I am on a strict budget);
- From Victoria Miniatures I picked up some wheels and an ammo box from their ‘parts bin’
- From Eureka Miniatures I bought a 1/72 or 20mm resin & metal Sentinel Tank

My FUBAR VSF table kept me busier than I expected! I was planning on running three games during the course of the day but ended up ‘umpiring’ five complete games and running a three turn rules demo! All the players were interested in the rules and everyone enjoyed their game. The coolest thing was when two players after completing their first game decided to swap sides and play again! At one point during the games the Martian Tripod which thanks to a lucky 'Event' had covered 45 inches of the required 72 in just three out of the eight turns suffered a critical hit! A six was rolled on the Damage Table and the player then rolled another six on the Catastrophe Table resulting in a spectacular explosion and a quick game! In another game the British player seemed to spend more time fighting the Breakdown table than the Martian Tripod! All good VSF fun!

I actually think a few people may download the FUBAR VSF rules and give them a go from their comments. The other thing that was exciting for me was my models attracted positive comments even from some punters who didn’t even play the scenario! That was very pleasing!

At the end of the day the win tally was the Evil Martians four wins to one win for Her Most Imperial Majesty’s Red Coats (keeping in mind that the scenario is biased to the Martians to keep in the theme of the War of the Worlds book where the Tripods were pretty well immune to humanity’s Weapon systems).

Here are a few pictures from my ‘Table’...

Set up and ready to go! 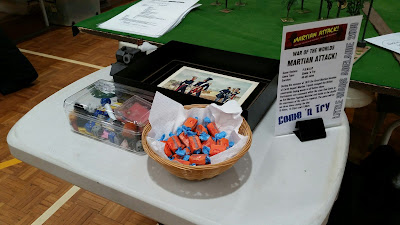 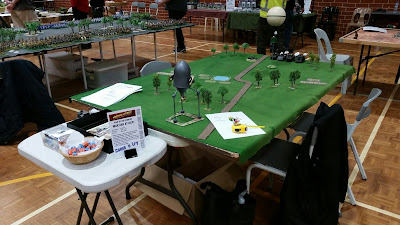 The first game of the day gets under way! 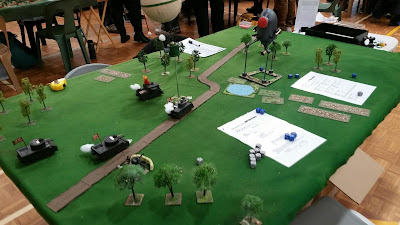 The British attack balloon closes in on the Martian Tripod as the Armoured Steam Wagons deploy... 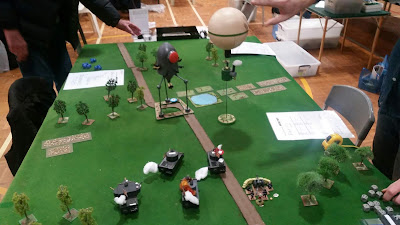 The Tripod about to exit the table turns and gives the British a final salvo! 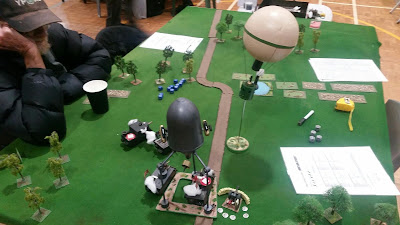 Colonel Puddin resplendent in his Dark Continent gear (his last posting) commands the men of the Royal artillery... 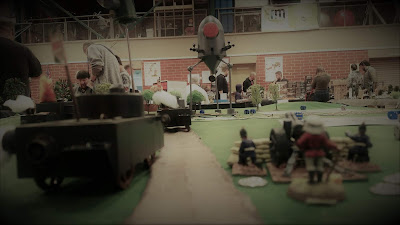 More pictures from the day covering the Games and Traders are on the Little Wars Adelaide and Little Wars Australia Facebook Pages!

Next time; Hmm now that’s a good question!
Posted by Captain Darling at 20:50