Not long to Little Wars! On Monday we played the Martian Attack FUBAR VSF game in preparation. I wanted to check I had everything required for the day ready and to record the table layout. It all went very well we played two games; one ran for 65 minutes lasting the full eight turns and the other went for only 20 minutes lasting only three turns.

Dave took the side of the Evil Martians and Al the stout British defenders.

Initially Dave charged forward and was able to score hits with on the British damaging two Armoured Steam Wagons while suppressing their Artillery. The British on the other hand were having issues with their Activation and hit rolls and then when activating hitting their target.

On turn five one of Al’s vehicles imploded due the result of a required roll on the Breakdown Table! Meanwhile the Martian Tripod suffered some superficial damage while effortlessly gliding forward firing at every opportunity.

Turns six and seven the British continued to fire on the Martian Tripod which arrogantly halted for a turn to fire all of its weapon systems causing havoc amongst the British. Then on turn seven came the crucial roll, the Martian failed its activation roll (a one in six chance) giving it a activation penalty for the next turn!

Turn eight and the Martian within easy reach of it’s objective failed to activate, game to Her Imperial Majesty’s Army...”Rule Britannia...”

Al’s turn to take control of the Martian Tripod!

Turns one and two the Martian powered forward at full speed firing rockets while on the move. The Tripod scored a couple of hits on the British who took on a strategy of just lining up along the edge of the table and firing for all their worth!

Turn three and the Martian had to consult the Breakdown Table due to encountering rough ground and it resulted in a power surge gaining an extra 10 inches of movement...in three turns the Tripod had advanced 48 inches of the 72 it had to cover in the allotted eight turns to win the game with next to no damage. Things were looking bad for the British!

The plucky British ignoring the martian good luck opened fire in their half of turn three. Several hits failed to even scratch the Alien Fighting Machine but one hit required the Martian to roll on the Damage Table...a six that required a roll on the Catastrophe Table...another six...BOOM a critical hit, the Tripod toppled over leaving a twisted heap of Illudium on the green fields of Ol' Blighty!

A few pictures from the night... 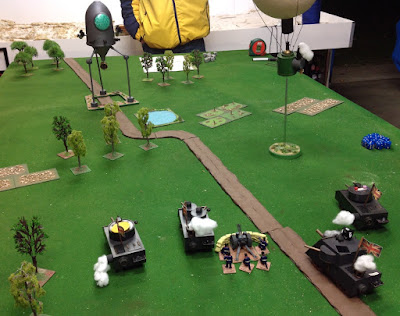 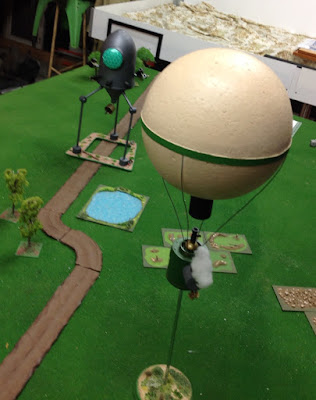 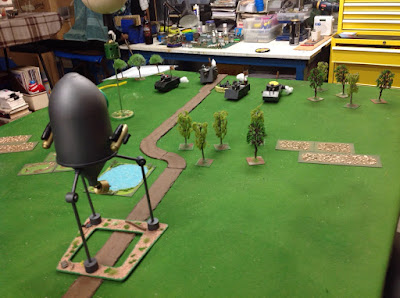 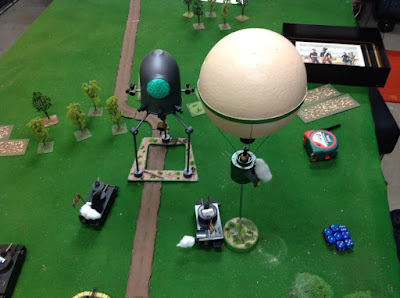 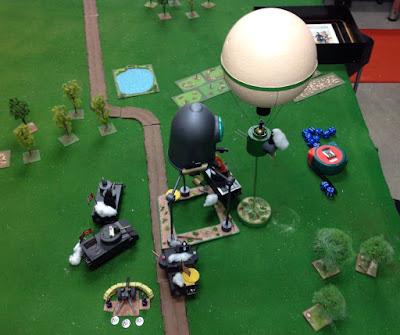 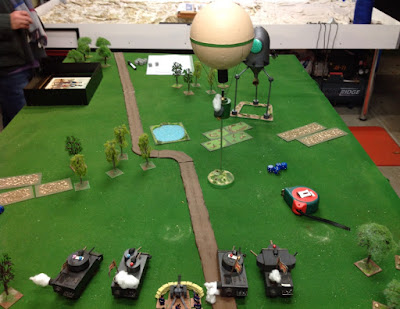 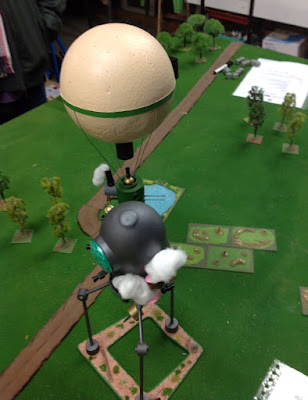 During our games I found a couple of ‘things’ which needed to be addressed to ensure smooth games on the day;
A Typo on Martian Force Sheet regarding weapon special rules that was amended
A turn grid was added to both Force Sheets
Added the Human available weapon attributes to the British Force Sheet
Created labels for Suppression, Speed and Turn markers
Created a label for the Martian Heat Ray ‘reload’ marker
All set to go now! Given the above I may should be able to squeeze a fourth game in during the day, I need to allow a bit of time between games so I can check out all the Vendors and other Games!

Don’t forget less than three weeks to Little Wars Adelaide so if you can make it roll up on the day and support the show to ensure it’s future! Here's the website...


Next Time; probably a report from Little Wars!
Posted by Captain Darling at 10:17