Members of the S.O.E. Team Queen Victoria as they explore the plain of Dloser in search of ancient Egyptian artefacts... 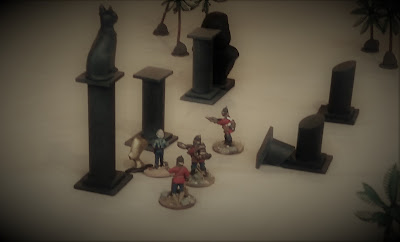 Time for the Christmas FUBAR VSF game! After a hearty BBQ had been consumed the teams were allocated and the order of play was randomly selected;

We had a quick run through of the rules and then hit the dice! Unfortunately I took a lot of the pictures for this game on my partners smart phone and they looked like crap (washed out by the flash?) so the pictures are a bit limited for this AAR.

Righty O off we go chaps!

All the teams started play the same distance from the Pyramid and were advised there were artefacts to be found across tabletop and dangers to be encountered.

Everyone took advantage of the dawn reduced visibility during turns 1 to 5 which kept to a minimum the likelihood of clashes to make a beeline for the Pyramid while searching the ruins and terrain on the way. Team Queen Victoria got the better of this phase of the game reaching the foot of the Pyramid first and acquiring a golden statue on the way. In the meantime Team Evil collected a stash of Egyptian Jewels and a crate containing two Canopic Jars while the British Museum's Explorers plodded along slowly in the wake of the others empty handed!

Initial turn and Captain Long-John's men of Team Queen Victoria quickly advanced on a wide front while the closely grouped team between the pond and cat topped column was Team Evil which cautiously edged forward... 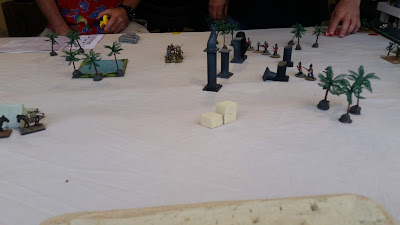 Team Victoria searching the ruined Egyptian Boulevard of columns, they were to find a golden Pharaoh's Head at the base of one of them! 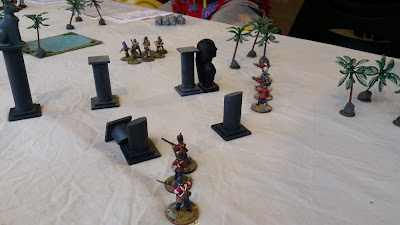 Von Hades Minions discovering the Pharaoh's Jewel stashed in the pond, this brought them to the attention of a couple of Royal Skeleton Guards which they dispatched with ease (DOH picture of that was washed out!). 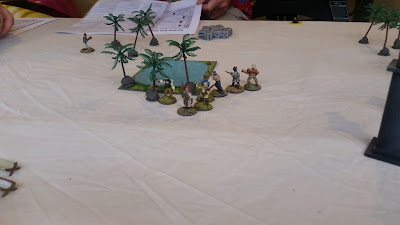 Steel Balls leading his evil scum into the archaeologist's camp where they stumbled on a crate of Canopic Jars and more Skeleton Guards, these too were dispatched with ease! 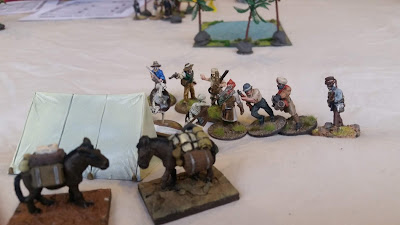 Overall view after 4 turns; on the left Team Queen Victoria are approaching the Pyramid, Team Evil has defeated the Skeletons at the archaeologist's camp and are looting it while the British Museums explorers are lagging behind! 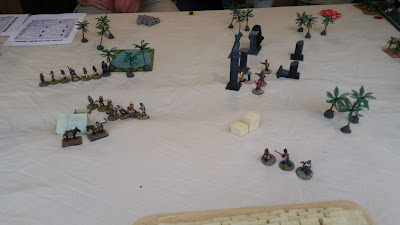 Close up of the archaeologist's camp and Team Evil! 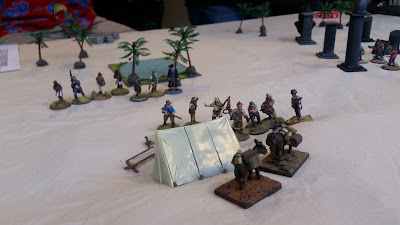 Turn 5 and the British tried to break into the Pyramid only to draw the wrath of a horde of (well four) Skeletons from the Royal Guard! In an odd bit of kindness Team Evil in their turn shot down two of these skeletons as they approached the imposing edifice (i.e. the Pyramid!). 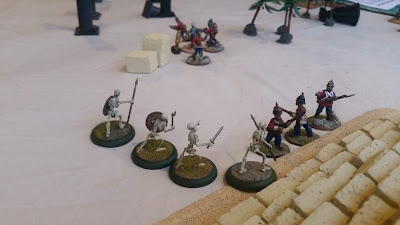 The British sorted out the last two, Riflemen Asquith and Chamberlain are seen here giving the Skeleton Guards the BAYONET! 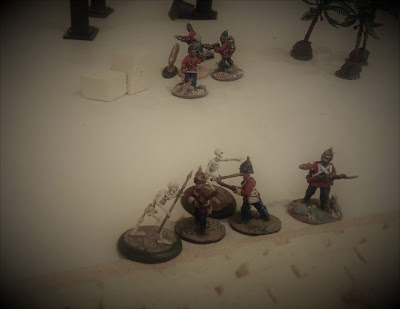 Okay for turns 6 to 9 we are in the picture free zone! here how it played out...

Turn 7
Team Evil engage Queen Victoria's redcoats and beat them in some hand to hand biffo clearing them from the exterior of the Pyramid. Team Queen Victoria begin an orderly withdrawal one group retiring with their remaining artefacts, Riflemen Asquith and Chamberlain are sent searching for more treasures and  Gunner Smith trapped in the Pyramid's burial chamber girdered his loins and awaited the worst! The British Museum's Explorers leaving the others to duke it out spread out searching for more artefacts!

Turn 8
Team Queen Victoria continued their advance to the rear. Team Evil dealt some severe blows to Gunner Smith rendering him hors de combat and relieving him of the Royal Conifer Tree. George Livingstone discovers an artefact, some Cultists one of whom he dispatches with his sword cane and moved off to continue his quest.

Turn 9
Team Evil hunker down in the Pyramids burial chamber. Team Queen Victoria continue to advance away from the action and some of the British Museum's Explorers keep searching the plain of Dloser for more goodies alas in vain while others tried to stop Team Queen Victoria from getting away.

Turn 10 Riflemen Asquith and Chamberlain discovered yet another golden statue, they then head back to their base of operations. Team Evil wile away their time playing whist in the Pyramid's burial chamber and the British Museum's Explorers try one last time to stop the British getting away with their bounty but their aim is woeful!

Riflemen Asquith and Chamberlain discovered yet another golden statue. 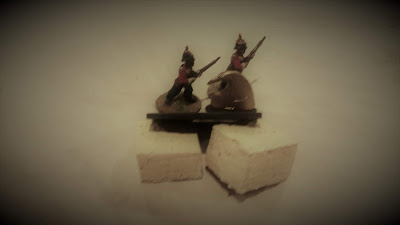 Turn 11 and The British Museum's team leader, Fred of India after moving quickly across the table with the assistance of his robotic legs dealt with one of the roaming Cultists. Next turn he collected the second crate of Canopic Jars! In the background George Livingstone can be seen searching for further artefacts! 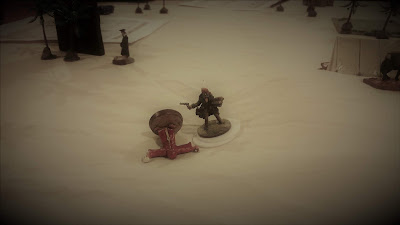 At the end of the 12 turns Team Queen Victoria's survivors and their treasures were safely aboard their river gunboat, the remnants of Team Evil were cowering (as evil types do) in the Pyramid's burial chamber their hands tightly wrapped around the artefacts they had discovered and 'acquired' and the last of the British Museum's explorers were scattered over the plain of Dloser but they were now in possession of some artefacts! The victory points were tallied and Team Queen Victoria won the day (as of course in the age of VSF they should!)

Well an enjoyable evening was had by all! The actual game did not play out at all like my play test but it still worked okay, the point totals were very competitive. Also of note the booby traps had no effect a couple were triggered and caused no damage I've noted that for next time, more lethal booby traps! Now that all the TSOG guys have experienced the FUBAR VSF Pulp rules the next time we play I'll give each player a couple less figures each but use the full Hero Point rules and include many more steam gadgets. Woo Hoo!

And thanks to Dave and Al for supplying the Palms Trees, Skeletons, Cultists and Mummies!

Next Time: Good question that one oh and Happy New Year!
Posted by Captain Darling at 14:06