‘An Incident at the Dloser Pyramid…’

Scenario Background;
After the discovery of the Long-Lost but recently discovered Pyramid of Dloser S.O.E. dispatched a Team lead by Captain Long-Johns with Royal Navy support to survey the structure and recover any items of importance.
But little did intrepid the force’s leader, Long-Johns know but the Pyramid’s location had been leaked by a double agent of the Tsar posing as Fakir in S.O.E. Agent Bigger’s entourage. His task was not going to be easy!
June 20 and after a perilous journey the British Expeditionary Force disembarked from their transport ship, the Shastah and despite warnings of a pending sandstorm moved off toward their objective as soon as the sun began to rise. At the same time two other Teams of intrepid (and not so intrepid) men were carrying out exactly the same mission, the groups Doktor Von Hades and the British Imperial Museum had co-incidentally arrived that very same day!


S.O.E. selected a group on upstanding members of Her Most Imperious Majesties Army to comprise an Expeditionary Force to be sent to Africa and investigate the Pyramid of Dloser and its environs. These well-equipped “Good Guys” disembarked near the Pyramid from the River Boat Shastah in darkness and awaited the sun. They were men of valour and honour and in true British tradition will kill anyone who gets between them and their objective…the Queen’s men stirred into action at first light and approached the Pyramid from the east, the time was 4:30am local time.

Faction Evil, Von Hades Minions!
On hearing of the discovery of a new Egyptian Pyramid Doktor Von Hades dispatched a group of his “evil cronies’ to find and recover any mystic items from the Pharaoh’s final resting place. They were the type of men whom could be found in the slums and dens of iniquity of the world so basically have the same mode of operation as the men from Queen Victoria’s Faction i.e. they will kill anyone who gets between them and their objective. They arrived in the vicinity of the Pyramid and advanced on it from the west at around 4:30am local time.


News of the unearthing of the Long-Lost Pyramid of Dloser became the topic of conversation in every Public House of London despite S.O.E.’s attempt to keep it a secret. It was while planning a new Safari under the patronage of the British Imperial Museum at the Bucket of Blood drinking establishment the famous Fred of India overheard the news. Being a man of action (and fortune) and willing to destroy any antiquity in search of loot and lion skins Fred was spurred into action! He gathered his loyal Safari companions and native attendants and departed for Egypt post haste. He would search the site for any items of interest (i.e. value) and flog ‘em off to the highest bidder, plus there may be some native wildlife he could shoot and get stuffed for his collection…the Safari arrived at the location of the Pyramid neared it from the south at around 4:30am local time. 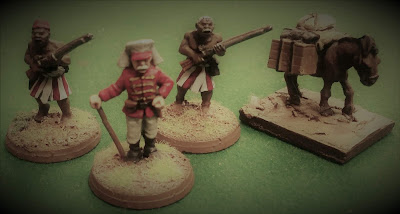 Mummies - Average Blokes
Picture of the Mummies was one that was unusable! DOH!

Game Characters
Mummies, Cultist and Pharaoh’s Skeleton;
Controlled by the Umpire BUT must attack the closest Player Characters by charging, they have no ranged weapons.
A total of 12 pairs are available, a pair will appear on a roll of 5 or 6 (Umpire’s discretion here too) when any terrain is entered or moved adjacent to. Once the pairs have been deployed no more will appear (okay there is Umpire discretion at call here as well!).
Mummies, Cultist and Pharaoh’s Skeleton:
Activation: Automatic with 1 Action only
Expertise: 4+
Wounds: 1
Hero Points: 0
Save: 6+

Victory Conditions:
Locate and extricate to their side of the table as many of the hidden artefacts From the Plain and Pyramid of Dloser and kill as many of the opposition as possible. Artefacts can be removed from the play area and the Character can return to the table the next turn to ensure the Faction retain it, artefacts on the tabletop at the end of the game are deemed owned by the Faction (if any) that possesses it.
Artifacts;
Pharaoh’s Sacred Conifer (what we'd call a Xmas Tree) 2 VPs
Pharaonic Statues x 4 1 VP each
Crate of Two Canopic Jars x 2 1 VP each
Crate of Ancient Scrolls 1VP
Pair of Rosetta Stones 1VP
Royal Jewels 1 x VP
Royal Gold Stash 1 x VP 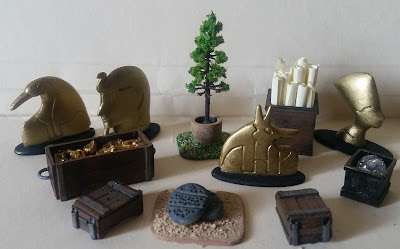 Next Time; the AAR of course!
Posted by Captain Darling at 14:48