The “Cruise” of the Landship Borodino – AAR

The “Cruise” of the Landship Borodino


In the New Year of 1880 the Imperial Russian Army landed an elite unit near the mouth of the Thames Estuary at Canvey Island. This sortie was to take pressure off the landings further north and make a dash for the British capital. The offensive was planned by the top men of the Imperial Army Intelligence Bureau and sanctioned by Prince Alexander Mikhailovich Gorchakov, the Imperial Russian Foreign Minister himself!

A combat group from the 4th Steam Grenadier Regiment with the newly completed Landship Borodino would make up this fighting formation. The Tsar feared committing a Landship to England in winter months when the weather was inclement and the ground wet but his Foreign Minister convinced him the risk would be worth the prestige gained at the sorties victorious conclusion.

The landings were completed successfully but with one problem the Russian Grenadiers were landed miles west of their destination and were assembling to the west of the town of Corringham while the Landship Borodino was put ashore at its correct disembarkation point near Canvey Island well to the east of Corringham!

As soon as the officer leading the the Russian infantry realised this he immediately moved his men east to meet the Borodino but they became entangled with local militia, using their new Marconi wireless set they contacted the commander of the Borodino, Captain Matyushenko to let him know the situation.


Captain Matyushenko decided to move west at top speed to rendezvous with his infantry support so together they could complete their assigned mission. He ordered full steam ahead and with a rousing Hurrah from the entire crew the Borodino lurched west and into local folklore…they were unaware that Armoured Steam Wagons of the Prince of Wales Light Dragoon Regiment were carrying out training exercises nearby shaking down their new vehicles and their officer Captain Mainwaring had orders to intercept the Russian behemoth.


The Borodino entered at full speed on turn one while the British came onto the table directly opposite and "it was on" from turn two!

At long range the Borodino took out one of the British Armoured Steam Wagons and continued straight down the centre of the table.

The British suffering from inconsistent activations fired as soon as they were in range of the Russian Landship but initially to no avail.

Turn 4 and the Borodino’s front turret again belched smoked and flame and put a second British Vehicle from the Prince of Wales Own Dragoons out of action but its machineguns were still out of range and turning to manoeuvre the rear turret into action would mean slowing down its westward progress.

At this stage British fire was still ineffective they scored only a few hits and the Russian saving throws negated them all!

The next turn literally turned the game. Captain Matyushenko decided it was time to turn and bring his full broadside to bear on his foes when an Activation roll of one sent the Borodino to the Breakdown Table. The result was a power surge; the Borodino was to move straight forward the total number of inches on two regular dice. The result was TWELVE suddenly the Russians were over half way across the board and within two inches of ramming a British Armoured Steam Wagon!

Luckily for the British their three remaining vehicles passed their activation rolls on this turn and a hail of fire was poured into the Borodino. The results a the barrage were nasty, four crewman dead, one secondary machine gun destroyed plus 2 speed hits and 2 two steering hits were accumulated. One more speed or steering hit and it was all over for the Borodino.

The Dice Gods turned on the British next turn as the Borodino lumbered around them all three of their vehicles failed their Activation Rolls and to make it worse through the Breakdown Table one of the Armoured Steam Wagons surged forward and rammed another while a second brewed up!!!!


I’ll pause here for a moment to run through the FUBAR VSF vehicle rules and explain the second British vehicle brewing up. For any vehicle an Activation roll of one incurs a roll on the Breakdown Table which this vehicle did, it got a six, the result of that was it had to roll again but this time on the Damage Table, it rolled another six which means a further roll but moving onto the Catastrophe Table (I know sounds ominous) it then rolled yet another six which results in a KABOOM effect no guesses what that means…this is one of the things I love about these rules the unpredictability of the technology!


Okay at this stage the game was up for the British a full broadside from the Borodino wrecked their remaining vehicle allowing the damaged but functional Landship to limp off of the western edge of the board securing a victory.

Some pictures friom the AAR above: 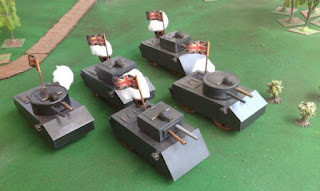 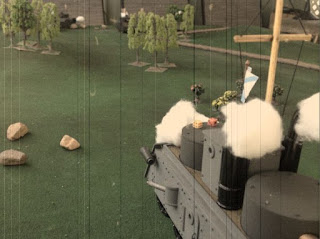 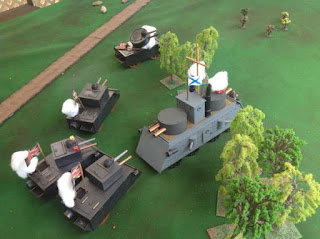 The Borodino surges forward out of control and almost rams a British vehicle! 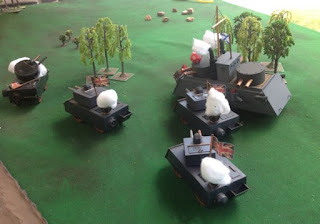 After suffering a heavy bombardment the Borodino is lucky as it limps around the British vehicles two of which are about to fall victim to the Breakdown Table! 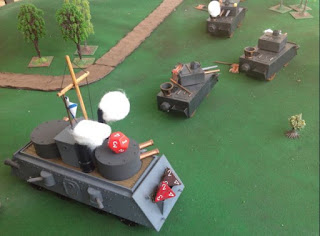 The end of game as the Borodino takes out the last British Armoured Steam Wagon.
The large 12 sided red die is recording crew casualties on the Borodino and the two four sided ones are recording the steering and speed hits it was a close run thing!

Next time…errrm Building the USLS Lexington
Posted by Captain Darling at 17:33