I’m enjoying building models for the VSF scenarios I am developing and being able to incorporate this blogs lead character into these games is going to be even more fun! Anyway having completed my third “Landship” I’ve put a bit of a story together to go with it, I hope you enjoy reading it!

‘The World Stunned - The United States Land Ship Lexington Launched!’ read the headlines of newspapers all over the world as they were being printed on the first day of February 1877. That was the day that out of the blue the Government of the United States of America released the news to the world that the first of its Landships, the Lexington was now fully operational. This towering Landship was bombastically claimed by Administration to be a major leap forward in Landship technology and construction!

The information released about the USLS Lexington revealed it was an impressive fighting machine in every respect: the armament consisted of an ‘all big gun’ arrangement; four 32 pounder guns in forward mounted turrets, a single rearward firing 48 pounder and two quick firing 7 pounder guns mounted one each side of the superstructure, it is the fastest operational Landship in existence with its propulsion supplied by the latest compact high pressure steam turbine engine from the Cincinnati Steam Engine Company, the powerplant drives to six large independently sprung steel reinforced wooden wheels, the well armoured hull is complimented by a heavy front armoured plate and two curved main turrets all three cast in single pieces thus providing excellent protection for the dozen man crew, lastly the conning tower is well protected and placed high above the hull giving good all round visibility. The builders were certain their magnificent new armoured Goliath would give engineers all around the world something to think seriously about when planning their own new designs!

A display day for the world to see this new technological marvel was announced and “guests” from all the major countries of the globe were invited. They were to see the USLS Lexington engaged in a live fire exercise and then after that was completed and they had seen the Landship run through its paces there would be an opportunity for a close up inspection session.

The display day, February 7th 1877 was attended by the President, Ulysses S Grant his wife and staff, many members of the Senate and Congress, the whole of the USA military command structure, no fewer than 100 representatives from 48 different countries from around the world and dozens of newspaper reporters all anxious to see the new USLS Lexington in action and to also get a up close to it.

The whole show ran like clockwork as “Ol Lex” manoeuvred in cooperation with infantry, cavalry and smaller Armoured Steam Wagons to take all the objectives assigned to them during the grand military exercise, a massive fireworks display accompanied by a rousing brass band followed the end of the war games and continued until the USLS Lexington had been repositioned and prepared (cleaned) for the “guests” to inspect it.

During the reception after the inspection time was completed the President was empowered by the just completed spectacle and was able to reinforce his countries place as a great power with the attending emissaries. A lighter point came about during the political jockeying of the reception soon after supper when the First Lady, Julia Grant expressed to a delegation from the coach making firm that supplied the hull for the Lexington if it came in any other brighter colours to which a young teenage employee, Henry Ford said “We can supply our customers the hull painted any colour that they want so long as it is battleship grey.” There was much joyous laughing at his remark!

The two official USLS Lexington launch Photographs, these were available for all the guests at the great display day to buy along with a copy of the official program: 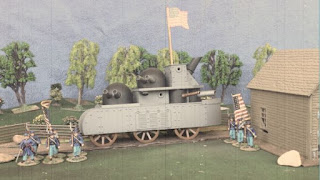 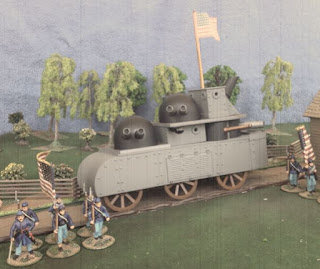 As well as purchasing the official program and photographs Captain Darling who attended the ‘launch function’ for the USLS Lexington on behalf of Her Majesty’s Government took many notes and made sketches while subtly questioning as many engineers and test crew as he could about the new Landship. He made some astounding discoveries he was quick to dispatch to his superiors in Great Britain. Like all fighting vehicle the Lexington was a fine balance of weapons, armour and drive train and there were limits that had to be taken into account in all three of those areas. The three main examples of shortfalls in the design he discovered and which the Americans had failed to include in the data they released to the world on their new Super Heavy Ironclad were: the new engine even though powerful and compact was prone to overheat so a large cooling vent was installed on the port side of the hull therefore the armour was very weak at that point, the high conning tower was so high in fact that it could actually overbalance the whole vehicle if turns were taken too quickly or too sharply and finally the superior speed was not just due to the new engine armour weight was reduced on the vehicles sides and rear making it less impervious to fire in those areas.

Captain Darling and Major F. Lieter of the United States Army pose by the USLS Lexington while another member of the British delegation gets dirty inspecting the new Landship closely! 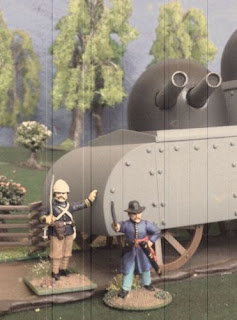 Next time - A run down the building of the USLS Lexington and maybe some more AARs…
Oh and Happy New Year!
Posted by Captain Darling at 16:23