The first Steam Driven Armoured Aeronautical Conveyance was built in Kitty Hawk, North Carolina USA it was dispatched via train to the testing grounds in Virginia. Below are images taken of it during the shake down process, note this picture was taken soon after the launch of the USLS Lexington while Captain Darling and his British delegation were still on hand and they are seen in the photographs: 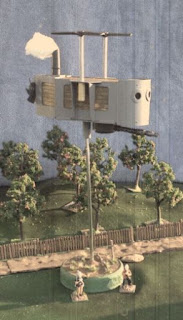 Well only a couple more days of my ‘Festive Season’ leave left so I’ll make hay while the sun shines (quite literally here in Adelaide, South Australia!) and get a couple more Posts up on the Blog before I become time poor again.

Well the Steam Driven Flying Fighting Contraption needed a stand and my plan was to put together a heavy base with an extending aerial like those on portable radios or the old cordless phone base units had. But since after moving house last year (the reason for my hiatus on gaming and this blog during that time) I’ll be buggered if I can find half of what I know I have ‘somewhere’ but given that I managed to find and old aerial albeit not the thicker one I know I have 'somewhere'!

Okay armed with an old food jar lid, an aerial, some premixed cement and some sheet styrene I went to work! The thinner aerial is a little stressed when extended by the flyer’s weight but it is still strong enough for my purposes. I was able to extend it to the third segment but that was pushing its strength luckily I only need two level for my FUBAR VSF games (I'll Post my FUBAR VSF Flyer rules soon).
A picture of the stand with a jar of the donor breakfast spread included. Vegemite is an Australian institution and I believe it will be mandatory for all visitors to our great country to try it (actually that’s not true…): 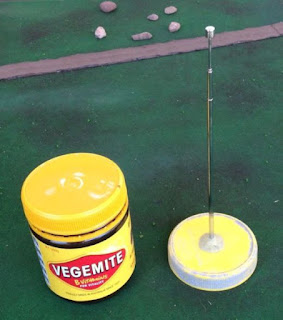 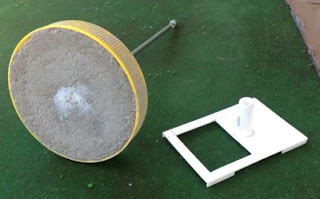 Coming soon: more stuff…hmm I’ve only got three days of leave left and so much to write up!
Posted by Captain Darling at 07:31