VSF AAR - The Bridge on the River Wee

When it comes to VSF gaming you can never have enough unreliable steam vehicles in any action, well at least that's what I say...here's an AAR of my latest scenario from the First Great Steam War. Those pesky Ruskies are taking on the Red Coats from good old Queen Vic’s finest. It had two trial run throughs before this play and will definitely get another outing if only to see the FUBAR VSF Breakdown table in in action over and over again!

A period photograph showing the valiant Britishers of the Little Tinkle Volunteer Rifles facing the Russian Hordes at the fence line... 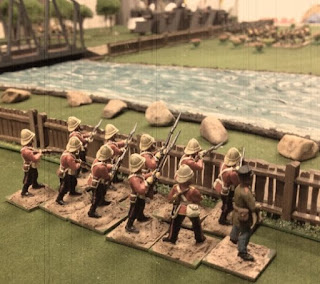 The Bridge on the River Wee


April 1878 and the Imperial Russian Expeditionary Force were advancing steadily inland from their beach head on the Thames Estuary based around Corringham. The Russian units were being slowly reinforced and their commander General-Lieutenant Lazarev never seemed to have enough men and equipment to carry out all the orders he was continually receiving from the Imperial Headquarters based in St Petersburg. Their latest communication directed Lazarev to cross the River Wee and swing north of London to block any British troops from assisting the English capitols defenders as the Germans approached from the south and south east. Lazarev and his staff assessed these instructions and found the River Wee was indeed of great strategic importance and to secure a crossing point would be of the utmost importance for any future offensive action in Essex. They determined the best place to cross the Wee was at an impressive bridge located near the small village of Little Tinkle. The bridge was of vital importance as it was capable of bearing the weight of the latest Russian Landships. The Little Tinkle bridge was a masterful piece of construction designed by leading British engineer Brunel, Fred Brunel. It was decided it must be captured and Colonel Badinoff and his elite 4th Armoured Steam Assault Brigade were assigned the task, they were to move off at dawn on April 7th.

April 5th Lord Kitchener-Bun while enjoying an evening at the theatre in the East End was handed a note by an SOE field agent which revealed to him the Russians intensions of commencing an offensive along the River Wee. He questioned his Aides asking them why “the Russians taking a Little Tinkle on the Wee” was of such importance he continued “when you have to go you know well you just have to go”. They explained the actual situation to him and he was astonished the difference an ‘a’ could make to a sentence! During the intermission before Port and fine cheeses he dispatched urgent orders to the commander of all forces in the Little Tinkle area, Colonel Dungworth. Dungworth was to gather all the units at his disposal and ensure the Bridge on the River Wee did not fall into the evil Russians clutches!

In a new and particularly nasty turn of events for the First Great Steam War General-Lieutenant Lazarev planned an air attack on Little Tinkle to demolish the buildings so they could not be used as cover by the local British defenders just before he began his offensive. Three Wong Flyers were employed and during the morning and afternoon of April 6 rained bombs down on the small village. Three times the Wong Flyers delivered their deadly payloads on the villagers leaving what one onlooker described as a perfect carpet of smoke in the place where the village had stood. A London journalist reporting on this atrocity and who had overheard the onlooker coined the phrase 'carpet bombing' and used it as the by-line for his article on this event. The expression stuck and was used to describe all such future aerial attacks during the First Great Steam War!

In the meantime despite the aerial bombardment Colonel Dungworth gathered all the men and machines he could muster and at dawn on the 7th of April they advanced to defend the Little Tinkle Bridge. At the very same moment from the south Colonel Badinoff's Russian command moved north to carry out exactly the same task...

The stage is set let the battle to begin...

The side with the most points at the end of eight turns wins points as follows:

Turn 1 and the horde from the east won the initiative and successfully got all their units onto the play area. All their armour in the centre one infantry section with the command unit on the right and their other two infantry sections on the left all getting cover from the available terrain. Unfortunately for them due to a breakdown one ASW got no further than onto the board edge where out of range of the enemy it parked for the duration of the action. The British had even worse misfortune with two infantry units and two of their ASWs failing to get onto the play area on the first turn! Their other forces made good headway with the armour in the centre and infantry on their right.

The Russians approaching the Little Tinkle Bridge from the south... 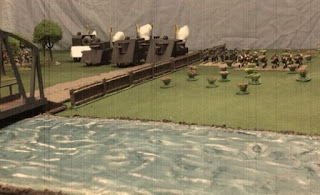 The British approaching the Little Tinkle Bridge from the north... 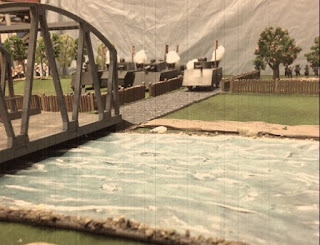 Turn 2 again with the initiative went to the Russians and the mighty Mk XII ASW fired its giant 13” mortar at the lead British Steam Wagon. When the smoke cleared from the huge blast all were amazed to see the British vehicle unscathed continue to roll forward...an ominous start for the Ruskies super weapon! Eight dice five hits and in the end no effect! All the other Russian vehicles that could fire did so also with no affect! Their foot troops moved slowly forward. Activation rolls still left one British vehicle and an armoured infantry section off board and another Steam Wagon on fire! All the infantry that activated advanced rapidly and they secured a fence line on their right flank while the vehicles fired ineffectually at their Russian opposites.

Russians in the foreground at the beginning of turn 2! Vehicles without smoke in their stack/funnel and not tilted or with turrets removed are immobilised. 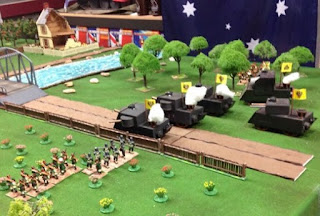 Turn 3, the two British infantry sections were falling behind on the left while their men at the fence line engaged the Russian infantry. The Armoured Steam Wagon that was aflame was put out of action when the crew were consumed in the blaze. For the Russians their infantry continued to advance but one vehicle was destroyed by the British and a second became immobilised on the road. This breakdown and the fact the mighty Mk XII even though needing to remain stationary to reload accidentally surged forward out of control cut off any deployment opportunity for the last Russian vehicle!

Sergeant Sergi the driver of the Mk XII Russian Armoured Steam Wagon accidently engaged the forward gear instead of the handbrake requested by the Commander so instead staying put to allow the mortar to be reloaded it surged forward just missing the vehicle to its left and the immobilised one on the road, in this position it became a road block as it requires 3 stationary turns to reload! 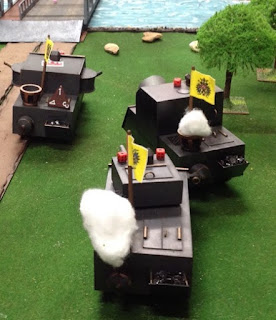 Turn 4 and the British finally gained the turn initiative and the last of their units finally entered the fray but it was of little use to them as the Russians were getting closer to the bridge faster than them and with fewer casualties. This turn saw concentrated Russian fire all but wipe out the Little Tinkle Volunteer Rifles!

The brave men of the Little Tinkle Volunteer Rifles pay the ultimate price for Queen and Country! 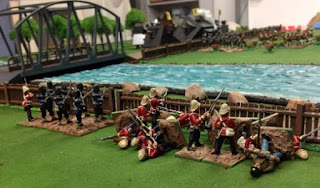 Turn 5 and again the Russians gained the initiative for the turn, their immobilised Mk X continued to fire with success on the British while the Mk XII sat stationary reloading its 13” mortar blocking any vehicle movement in the Russian centre. The British foot on the left moved forward cautiously using all the terrain they could find while the units on their right continued to be hammered the men from Little Tinkle breaking and running! Yet more breakdowns saw one British vehicle surge forward out of control into the river to be abandoned and two others miss a turn by stalling.

The British left advancing maximising the cover of the terrain... 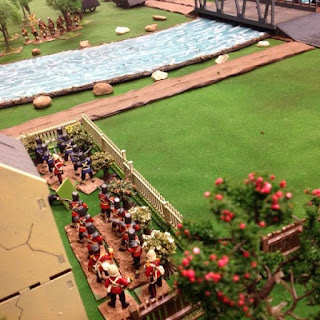 Last last mobile Russian Armoured Steam Wagon sets itself up in an over watch position covering the Little Tinkle Bridge as it daren't risk a breakdown in the trees or fields and the rest of the Russian centre is blocked! 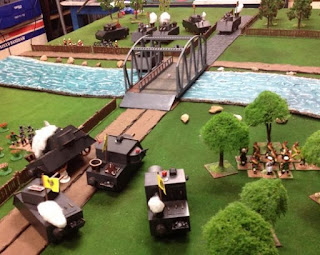 Turn 6 and with the initiative the Russian infantry crept within dashing distance of the bridge while the armour continued ineffectual fire and of course the Mk XII crew struggled to reload their mortar. The British also manoeuvred for position and their few operational guns now targeted the Russian infantry.

The Mk VI Armoured Steam Wagon from the 2nd Queens Mechanical Dragoon Rgt ditched in the River Wee after the driver lost control of it on turn 6! 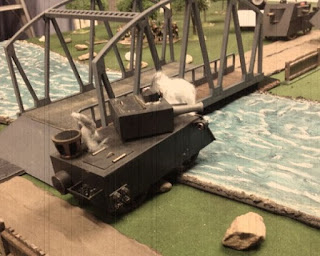 Turn 7 and with the initiative again in the hands of the invading horde things looked bad for the boys in red! Both sides jockeyed their vulnerable surviving infantry closer to the bridge while the armour duked it out. One Russian infantry section finally broke when caught in the open approaching the bridge. The Russian 13” mortar roared again and this time with some success wiping out over half a section of British Naval Armoured infantry. And to top the action off the men from Little Tinkle surprisingly rallied and turned back into the action running flat out for the bridge!

A British Mk IV Armoured Steam Wagon in action against the Russian infantry of the 36th Kiev Grenadier Rgt of the opposite side on the Wee! 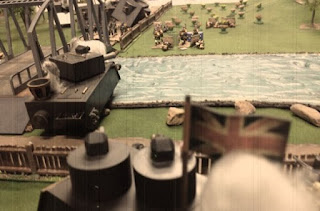 Turn 8 and the British finally gained the initiative. This was the last turn and the race for the bridge was on! Foot troops sprinted toward it from every direction while the surviving armour lumbered forward. But it was now the early poor British activation rolls and their infantry casualties caught up with them and the Russians won the day 18 VPs to 6VPs.

The Little Tinkle Bridge on the River Wee was in the invaders hands! A dark day for the Empire indeed!

Overall view at the end of the game from the southern (Russian aspect)... 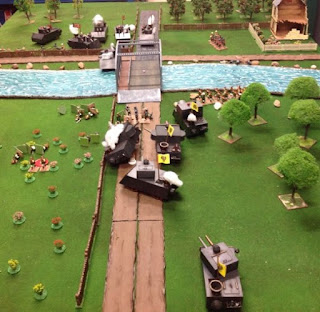 This was a fun action with lots occurring. During my test games went one to the Brits and one to the Ruskies. Both sides rolled a disproportional number of 1s during their activation attempts during the game. The British were worse off and received many more breakdowns than one would have expected especially with a only a one in six chance and some other bad activation rolls for their two left flank units left them struggling. On the other hand the Russians only lost one ASW on the first turn immobilised out of gun range of anyone and a power surge created a bottleneck for them in the centre due to a breakdown roll also their foot figures hardly failed to activate at all so on the day the dice gods were favouring them.

Well back to the gaming table...
Posted by Captain Darling at 13:00