Recently I've been expanding my selection of 1/56 terrain for my growing 28mm 'armies'. After deciding on using Sarissa laser cut MDF buildings I visited Arcane Scenery and Models and bought a selection of kits to create a VSF village...

On the banks of the River Wee the sleepy village of Little Tinkle has had an interesting history dating back to the time of the great Norman Invasion of 1066! Founded by a little known Knight Sir Randolph Tinkle its fortunes waxed and waned as the years passed. Randolph was a lover of apples and for the whole of Little Tinkles history an apple orchard thrived in the rich soil on which the village was located adjacent to the Tinkle family residence.  Some even say the apple trees that were finally torn down in the early years of the 20th Century were related to the first ones the great Knight planted himself around a 1000 years earlier!

During its many years the town was inundated several times in Wee (!!!!!). Fires ravaged the buildings more than once and the Great Little Tinkle Fire of 1666 was said to have been lit by a mad decedent of Sir Randolph Tinkle who fiddled as the town folk desperately battled the flames! By the time of the Great Steam Wars of the late 19th century the town was only recently rebuilt after a great conflagration during the 1860s the only surviving structure being Tinkle Farm constructed during the Napoleonic Wars by Captain Tinkle of the 33rd FootnMouth Regiment. Enclosed by a neat picket fence Tinkle Farm stood next to the traditional Apple Orchard and the new Town Square was erected by it. The feature that made Little Tinkle so important during the 1870’s and 1880’s was the great iron bridge spanning the River Wee and bore the village’s name! The sturdy structure christened The little Tinkle Bridge by the local Council was a masterful piece of construction designed by the leading British engineer of the time Brunel, Fred Brunel.

With needs of more pastures the early 20th century saw the river Wee dammed up and filled to create a great alluvial plain on which crops could flourish. The town was demolished and all that remains for visitors today are several historic plaques marking major events that occurred in its history. The famous Little Tinkle Bridge was ignominiously removed when the river bed was filled and it was recycled into metal plates for the hull of the great steam ships that plied the oceans of the world!

The village of Little Tinkle and environs April 1878 after Russian air attacks had damaged several buildings...the long standing Apple Orchard is clearly visible as is the famous Brunel designed bridge over the River Wee... 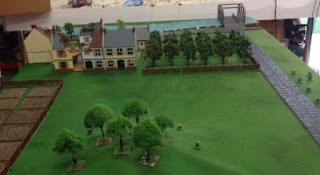 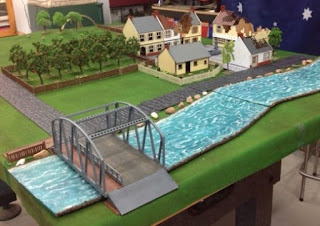 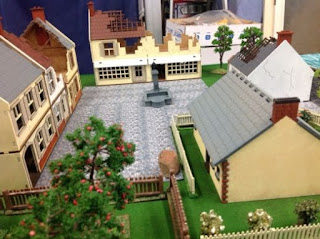 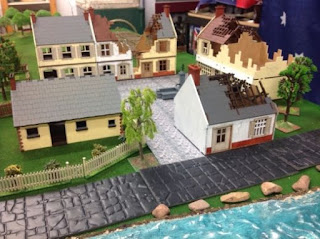 The village of Little Tinkle consists of:

All of these went together with no fit problems using just PVA glue. The rooves of all building are removable and where buildings are two levels the upper one is not glued in place to allow for easy figure placement on the ground floor. They are painted with cheap rattle can enamel paints and with highlights using acrylic paints.

These building designs were chosen as they should look okay for both the VSF and WW II periods as I plan on using them for my WW II 28mm skirmish gaming too. For WW II skirmishing I am looking at a couple of sets of rules; The Two Fat Lardies Troops, Weapons and Tactics and Nordic Weasel Games Five Men at Kursk…

See you next time!
Posted by Captain Darling at 10:10