After the Martian Invasions of the Earth had concluded and before Humanity became embroiled in the Great Steam Wars Mankind had to contend with an evil from within! An evil that few knew about but threatened every living creature on the planet. An evil so twisted and bitter that it knew no bounds in its evilness. An evil that stood out from all the evils of the past. An evil that became much to its own chagrin the dreaded arch enemy of Captain Darling. This evil had a name and the name was...Doktor Victor Von Hades.

Here are some photographs of Doktor Victor Von Hades' Secret Evil Lair. Surrounded by a homely white picket fence and a picturesque forest it is totally invisible to the average passer by...well excepting of course for those who notice the multiple large cannons, the Evil Henchmen guarding the front entrance, the victim's graveyard, the sand bag entrenchments, the African slaves and of course the "Evil Genius's Lair" sign... 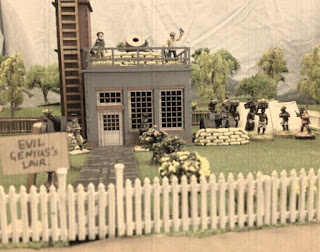 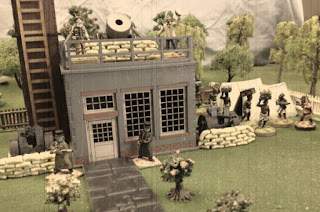 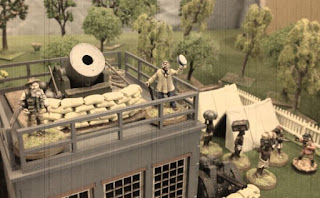 Well every Evil Genius has to have a Lair and thanks to Sarissa this one has. Yup the Sarissa Power Station that features in my WW II skirmish games will double as Doktor Von Hades' Lair. Being an industrial building with a chimney Von Hades will not only be able to carry out his regular evil activities such as capturing fair wenches and torturing hero type good guys but will also be able to indulge in evil experiments and the manufacture his evil creations!

Stay tuned to see how the forces of Goodness react to Doktor Von Hades!
Posted by Captain Darling at 09:22