October 1876, the British Empire’s SOE (Stealthy Overseas Executive) Agent Edward Bigger became aware of an extraordinarily large Electric Bill that had been issued to a small nondescript installation on the Channel Coast near the sleepy town of Rooty Hill. Spurred on by this information and discretely disguised as a vagrant travelling organ grinder with monkey Bigger travelled to the outskirts of Rooty Hill. What confronted him confirmed his worst fears this facility was indeed he work of Doktor Von Hades!

Nonchalantly Bigger sidled closer to the facility with a sketch book upon his organ and a camera secreted in the hat of his monkey! The daunting looking guards who appeared to be from the Dark Continent paid the vagrant travelling organ grinder no heed allowing Bigger to fulfil his task safely.


This is believed to be an actual picture of Edward Bigger in his discrete vagrant travelling organ grinder with monkey disguise... 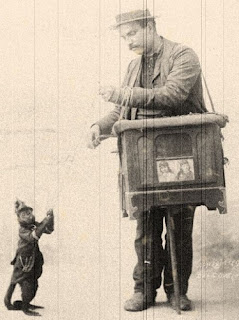 
With details of this mysterious facility recorded Bigger engaged in  a brief conversation with a couple of the Doktors henchmen who could not dectect any note of English in the organ grinders thick eastern European mutterings. A master of guile and cajolery Bigger had in no time discovered this evil looking machine was Doktor Von hades latest invention and was known as the Life And Structure Eliminating Ray, the LASER for short! He also gleaned from them that a test of the weapon involving the destruction of a whole town was anon so prompt action was required by the forces of good!

Bigger decamped for SOE Headquarters with alacrity and also sixpence in his alms tin! 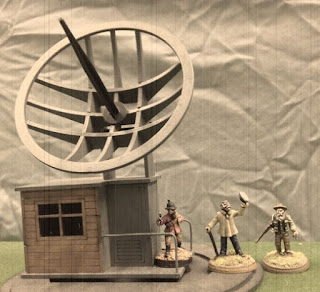 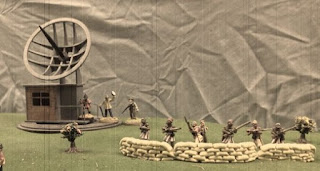 Von Hades uruly mob of Henchmen guards, a collection of dregs of society but each one dangerous and not to be trifled with! 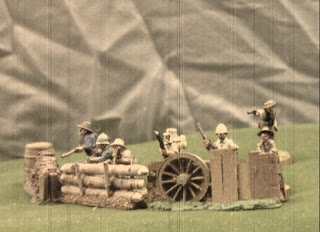 Later that same day in the office of the second in command of SOE known as Number Two Edward Bigger shared his sketch and photographs with Number Twos(!). The perils this instrument of terror threatened the world with triggered an immediate response. It was promptly decided that Captain Darling was to personally lead a military attack on Doktor Von Hades facility forthwith! Darling's inclusion in the operation was deemed neccessary as with Von Hades known to be on site there was no better man Captain Darling to apprehend him!


Next Time, an AAR of the game based on the raid on Doktor Von Hades LASER facility, The Battle of Rooty Hill!
Posted by Captain Darling at 13:26