It's always good to get my VSF figures and models onto the tabletop so "Tally Ho Chaps!"

The Battle for Rooty Hill reaches its climax as Captain Darling (foreground bravely fighting with sword drawn) fights to reach his nemesis Doktor Von Hades (cowardly lurking in the background waving his cap in an very evil manner)! 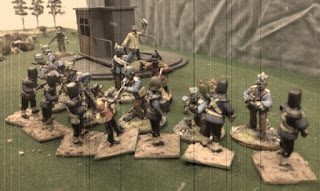 We have our two major protagonists on the field of battle this time Captain Darling and Doktor Von Hades. Now even though characters like the Captain and Doktor are in the long term indestructible they as vulnerable as every other figure in the action and can be killed by failing a save on any hit just like any other figure...BUT this means they are 'just' incapacitated, they are carried from the field by the closest friendly figure and then taken to the nearest exclusive Health Resort on the sunny Mediterranean coastline so they can recover and carry on the fight for good/bad in future games.

This game also features what FUBAR call 'Hero Points' which are allocated to the characters and they can be used to re-roll dice, get bonus movement etc so could be crucial in the outcome. Anyway enough babbling from me...

Spurred into action by a report from top S.O.E. Agent Edward Bigger the British launch a surprise attack on Doktor Von Hades Life And Structure Eliminating (LASER) Facility near the sleepy village of Rooty Hill.

The attackers are led by none other than Captain Darling who called to his men as they went forward "Tally Ho Boys let's make this a quick affair I have an appointment with the Mayor's daughter for morning tea and biscuits..."

This game has no fixed number of turns

Doktor Von Hades in a non combat figure, he is captured as soon as any British figure contacts his base
Captain Darling, Steel Balls and Nobby Johnson are all characters with 3,1 and 1 Hero Points respectively
The Light Steam Cannon fires every turn even with only 1 crewman with 3D6
The African section has a -1 modifier for firing and a +1 modifier for melee to their Expertise Value
Optional units are available for scenario balance on the players mutual agreement (no play test)

Doktor Von Hades and his two top Henchman were surprised as they enjoyed their morning tea and crumpets by the appearance of a force deployed by the British Army at their doorstep. They immediately summoned all their available troops to their action stations!


Captain Darlings troops attacked the LASER Facility from three directions stretching the defenders thin but Steel Balls assured Von Hades their men were up to the job...were truer words ever NOT spoken!

The British advanced at a steady pace firing as they approached and firing with great accuracy, it wasn't long before Von Hades African Body Guard and Henchmen twere aking casualties and wavering! Steel Balls and Nobby Johnson were quick to move up rally them and urge them on to hold their positions.

The stout British troopers were quickly up to the Evil Minions defensive position only to find them occupied by piles of dead Africans. Captain Arty Choke commented to Darling, "Not much chop these evil fellows eh what!".

Captain Darling could see his quarry, Von Hades standing in the open before him and urged his men forward! Enthused they moved forward.

Von Hades had one last card to play though and he called up his nearby Swiss mercenaries..."Switzers to the front!" bellowed Steel Balls and in a matter of moments the clear ground between Darling and Von Hades was occupied by a section of well trained and superbly equipped Swiss mercenaries!

Unfortunately for the Swiss they had no time to fire their special weapons before the armoured Britishers were among them! The swirling melee was deadly and men fell to the left and right, Captain Darling amid the thick of action was singled out by a couple of the mercenaries but they paid the price for their impudence!

With the melee going badly and more British advancing Doktor Von Hades thought discretion the better part of valour, he ordered a withdrawal, "Runaway! Runas" shouted Nobby and with the handful of remaining Swiss mercenaries covering them Hades, balls and Nobby fled.

The successful British cheered to their victory and taunted Doktor Von Hades and his Henchmen as they skulked away from the battlefield.

With the smoke of battle clearing Captain Darling, twirled his moustache, straightened his tunic, shared a pinch of snuff with his fellow officers and as he headed off to the town of Rooty Hill saying "Shouldn't keep the Mayor's daughter waiting eh chaps..."

The battlefield on turn one, Von Hades Evil Minions are dug in around his LASER facility, the British are advancing in three groups with the HMG armed 'robot' moving to the high ground to cover the advance. 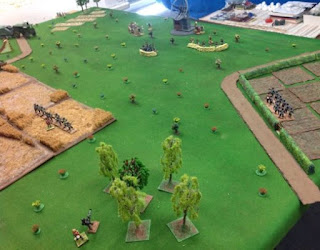 The view from the opposite side of the table, the first turns fire from the Evil Minions is ineffective while the Light Steam Cannon fails to activate! 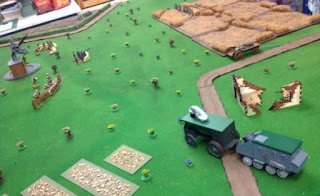 Turn two and the British continue to advance the dice see 1 Britisher in the open fall to 3 Africans in good cover!!! 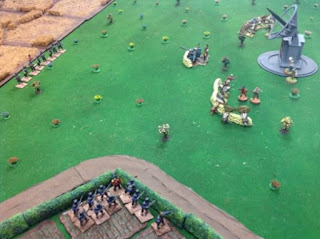 Nobby Johnson in the red tunic joins the Africans who failed their morale test, he uses his Hero Point to re-roll the result and they pass so can hold their ground. 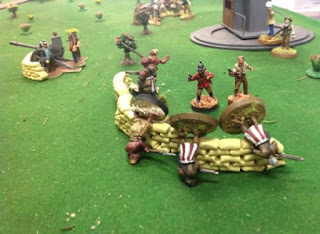 Also on turn two the Engineers disembark from their amoured transport and the mortar fires at the Evil Minions gun, it was a near miss one crewman is felled. 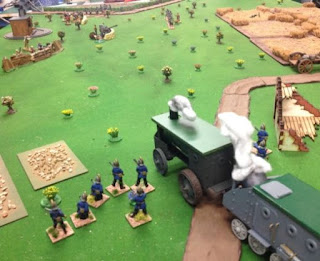 Turn three the British Riflemen fail their activation leaving them exposed to the Evil Minions gun which also fails to activate its had one shot in three turns now DOH! Darling and the Naval section start closing in on the Africans position. 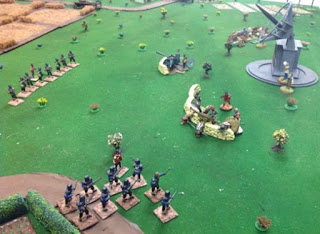 Turn four the Naval section reach the African's position finding it full of bodies. Also in turn 4 the Evil Minions deploy their optional reserve and by sprinting they get between the British and Von Hades! 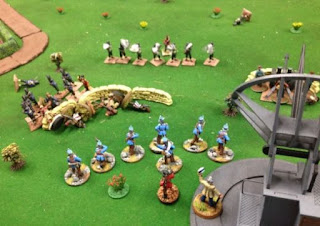 Same turn and the Henchmen are taking casualties from the advancing Engineers, they failed their morale too and Steel Balls used his Hero Point for a re-roll which they passed. All the Evil Minions characters Hero Points are gone art this point. 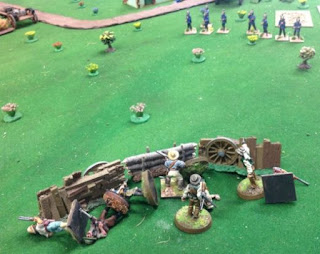 The Swiss mercenaries and Nobby Johnson deployed for action... 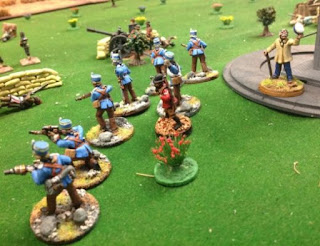 Th view of the Swiss defence line from the British side... 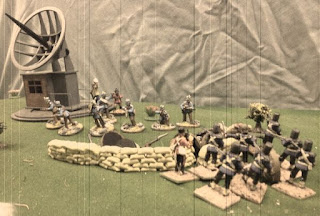 Also on turn four the Light Steam Cannon had a chance for a great shot at the advancing Riflemen and yet again it failed its activation...3 fails from 4 tries...grrrr...curse this new modern fandangled equipment give me a muzzle loading cannon any time! 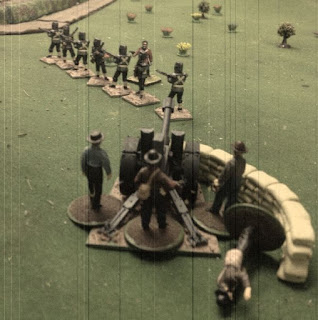 Turns 5 and 6 the game is decided in a grand melee between the armoured infantry and the Swiss. Captain Darling failed a hit save but thanks to his Hero Points was able to re-roll and bounded back into action!
Turn five melee... 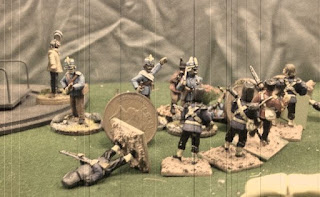 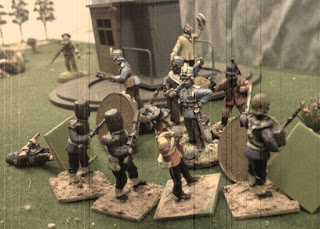 Von Hades and his Henchmen skulk from the battlefield in the distance Captain Darling can be seen taunting them! 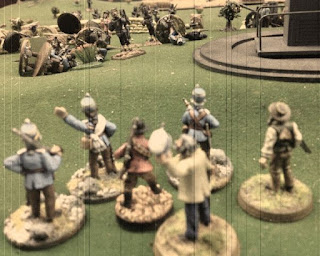 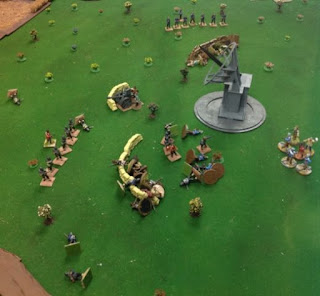 Next time, some more on the VSF Zeppelin/Airship project...or maybe something else not sure...
Posted by Captain Darling at 10:19