The Battle of Rooty Hill, 7 October 1876 was a glorious victory for Queen Victoria's mighty legions and a great setback for the evil designs of Doktor Von Hades!

An extract from Doktor Von Hades very own journal dated October 13 1876 refers to this day;

What to do, what to do! My world is now plagued by this damnable fellow Captain Darling, he has become the bane of my life. Just recently at Rooty Hill he led a British force that not only soundly defeated my private army but also secured my new LASER facility before I could employ it. Months of evil handiwork dashed in a blink of an eye! I will have words with my top henchmen at morning tea...something must be done about this impudent dandy!

As a part of the rebuilding of his army Von Hades turned his evil genius to creating a body of fighters to work in conjunction with his brave African Body Guard to ensure the likes of Captain Darling could never take him captive! The Simian Assault Section known as the SAS came into being...these sword armed clockwork Simians were designed to be tough, fast and fight like the dreaded Ninja of the East! The armies of the world now faced a new and relentless evil...dadadadaaaaa...

At a secluded Scottish dale the Clockwork Simians training with Nobby Johnson under the keen eye of Doktor Von Hades... 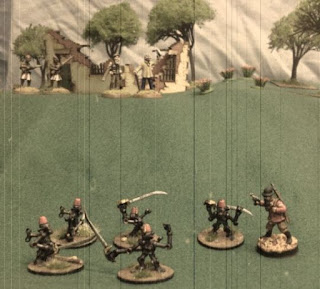 FUBAR VSF wise these critters are going to be pretty nasty:
Normal Movement: 12 inches
Activation: 3+
Expertise: 4+
Armour: 4+
They are not susceptible to Breakdowns
They are melee only figures
They +1 to expertise die in melee against regular figures
They -1 to expertise die in melee against character or special operative figures
They take two successful hits to kill, the first doesn't reduce abilities
They can not convert hits into suppression
These guys special abilities will be in the scenario special rules of any game they are in. They may also be subject to a wound down status but still thinking how to do this with recording number actions taken, moves made etc, maybe a third breakdown roll could trigger it not sure yet...
I picked up these 5 Westfalia sword armed clockwork monkeys unpainted on the LAF for half the list price, a real bargain! These Chimps are great sculpts and the castings are nice and clean to boot. They are about 20mm high so perfect for use in my 28mm VSF world. I undercoated them black then painted the bodies with one of my favourite colours Humbrol Polished Steel. Next I gave them a red fez (naturally) and eyes. Brass was used for the fez tassel, sword hilts and feature highlights. Lastly the sword got a coat of Polished Aluminium. After a good rubbing to bring the polished steel up I was really happy how these turned out. I like paining when there's no face involved!

The Clockwork Monkeys are wonderful sculpts from Westfailia:

The monkeys with some 28mm figures they'd be about 20mm in height:

I would love to get the set of five Westfalia clockwork monkeys armed with pistols but at 15GBP plus shipping I can't really justify it not with so much else I could buy with that... 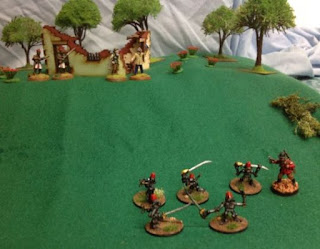 Next time...back to the Zeppelin/Airship project...
Posted by Captain Darling at 23:15