These are the set up details and special rules for the first of the The Russians Are Coming campaign games. A map of the play area is included. Please feel free to try this yourselves (you may have to adapt it for your rules) and let me know how you go!

Russians - Enter board from west edge turn 1
South Australians – may deploy in up to two groups of any strength anywhere on the board. They are hidden until the Russians contacts them, the Russian has a line of sight to them (only if they are in the open) or the South Australian player chooses to reveal them to move or fire them

At the game end the Russians must have at least one figure within 15cm of the barn or they lose, if they don't lose due to this condition Victory Points determine the winner they are calculated as below:
Special Rules
This is the actual sketch map drawn by Captain Darling soon after the action had occured and he had spoken with witnesses. The Scale, Legend and edge lengths were added by someone unknown in later years! 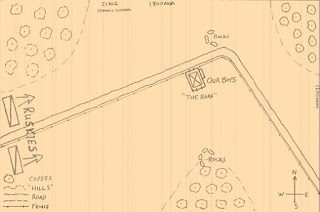 Posted by Captain Darling at 23:02