Where Are the All the Horses? AAR

We played the “Where Are the All the Horses?” scenario of the Campaign Game four times resulting in three South Australian victories to the Russians one. The first time was a solo run through by me to test the balance the other three were face to face games. Two were decisive South Australian victories the other two were shared and VERY close. It’s a hard game for the Russians as the Colonials have hidden deployment plus a very good defensive position. The Cossacks one advantage is their superiority in melee and this can make a big difference especially if they get into the barn as they can turn it into a charnel house for the locals in quick time!


We’ve decided the fourth game played, a South Australian victory is the “historical” one. So the Colonials are now one up with six to play.


Lieutenant Pomerov was suspicious of the seemingly abandoned and desolate barn that stood in open rolling ground before Sub-Lieutenant Yuskovich and himself. Yuskovich was less worried and eager to get his Cossacks forward as per their orders and he prevailed in the heated exchange between the two officers on how they should procede. Concentrating all their troopers on the north side of the road giving some of them cover from a wooden palisade fence they deployed and moved out toward the barn the sun on their backs.


The Cossacks rushed forward as quickly as they could run and it wasn’t long before the crack of Martini Henry fire rang in their ears! Sergeant Bill Smith and his picked riflemen were deployed in the barn and a nearby rocky outcrop expecting Russians the shrill whistle accompanied by roar of “Huzzah!” ended their wait and they saw blue clad Cossacks appear in no apparent formation running toward them. Smith gave the order ‘Fire at will!”. The first Russian fell to one of his rounds!


Lieutenant Pomerov’s section of Cossacks being deployed on the left were intended to move to the rear of the barn but the musketry coming from the rocks to the north of the road distracted them and became their target. Pomerov couldn't continue his flanking move while the enemy held that position. Covering the ground quickly and dodging to and fro they only suffered a single casualty as they closed on their objective.

Meanwhile the main strike toward the barn led by Sub-Lieutenant Yuskovich suffered severely from accurate fire coming from the barn's loft negating the fences cover. As they moved along the road as quickly as they could the losses mounted, two Cossacks were down and three wounded including Yuskovich himself and his bugler all before they had even reached the barn door! With a third of his men casualties the leading troopers threw themselves at the barn’s barricaded northern gates and they had an initial success killing one of the guards and pushing the other back but they did not actually breech the gates allowing more Colonials to fill the gaps they created.


Sergeant Smith’s men in the barn kept up a hot fire as the Russians neared the barn and once they arrived he led the ground floor defences maintaining the integrity of the gates and windows while riflemen continued to pour withering fire into the Ruskies from the loft. Casualties at the barn gates were replaced by the men from the loft as the Russian morale faltered. The Cossacks had had enough and fled back down the road to whence they had come only a short time ago, a few rifle shots accompanying them.


Rifleman Billy Hughes and his two mates from the Unley Butchery had been located in the rocky outcrop to provide enfilading fire on any Russians attacking the barn’s north gate but the course of the battle did not allow this they instead became the target of a furious charge of desperate looking Cossacks! The mates fire had been ineffectual until the Russian came in close and a sharp melee ensued with the Ruskies being forced back with one dead and one wounded at the loss of only Billy McMahon’s left shoulder strap! While the Russians were stunned by this setback the three men poured several deadly volleys into their blue clad assailants when the smoke cleared four were dead and the others had turn tail and were running, a shot from the Russian officer had wounded Billy Hughes. The three men looked at each other grinned and then cheered after the fleeing Cossacks!

Turns one to three saw the Russians advancing under hot fire form the Colonials the men in the barn scored several crucial hits: 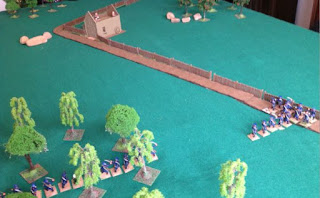 Pomerov in the green tunic leads his Cossacks 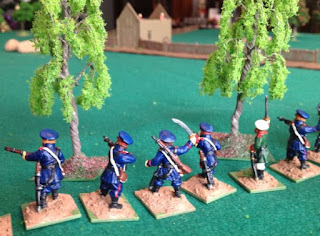 Yuskovich's Cossacks rush toward the barn during turn two 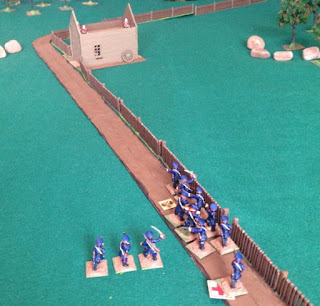 Positions at the end of turn three 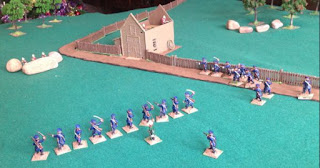 Turns four to six saw a close fight between Sub-Lieutenant Yuskovich's section and the Colonials defending the barn there were several close melee dice rolls which went to the South Australians allowing them to keep the Russians at bay:
The Russians almost breech the north gate of the barn! 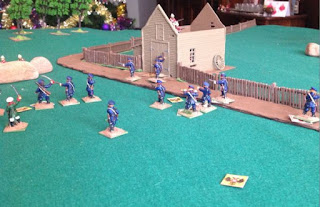 Overview at the end of turn four 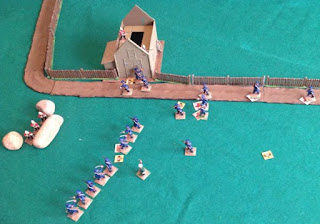 The fight for the rocky outcrop was short and decisive, the Russians got in close with few casualties and were able to get to grips with the three South Australians but again the dice went against the attackers. Then thanks to the Colonials winning the initiative roll of turn six they were allowed four Action Phases in a row (last two of turn 5 and the first two of turn six)allowing them to pour fire into Pomerov’s unlucky men. The Cossacks broke with around half their strength casualties:
"Trouble" at the rocky outcrop! 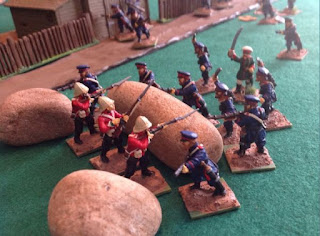 "Trouble" averted at the rocky outcrop thanks to Mr Martini Henry! 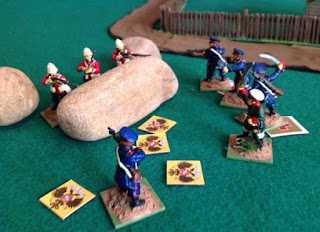 Overview at the end of turn six 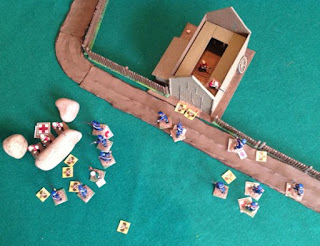 Turn eight and the Russians are in flight! 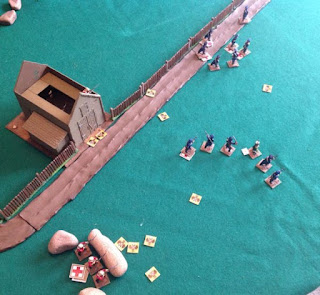 Ruskies fleeing into the setting sun, the rooms window was in the right place for effect! 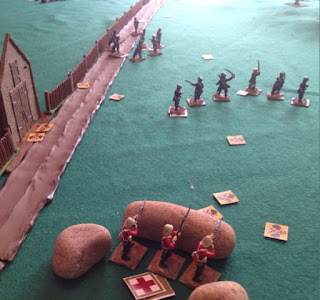 Captain Darling visited the scene of this action late in the evening and spoke with Sergeant Bill Smith about the afternoons events and his thoughts on the invaders, he reported back to Lieutenant-Colonel Downes just after midnight and declared "Sergeant Bill Smith says we have the Ruskies measure and you can all sleep soundly tonight Sir!" Both he and Downes laughed roundly...


Time to take a breath and plan when to play Campaign Game Two!
Posted by Captain Darling at 15:54