This second Campaign Game Scenario was interesting and over seven plays went to the Russian invaders five times (two solo and five face to face games). So this one is a win to the vaunted Imperial Russian aggressors leaving the running total at one win to each side with five to go in the Campaign.

Dividing the attacking Russians into three smaller units instead of the originally planned two larger ones allows them many options to advance and I think we saw most of these over the seven games. The Colonials big hidden first fire and melee bonus’s in the special rules turned out to be white elephants and it seemed opening fire on the Russians as soon as possible and keeping up a continual fire as they advanced proved to be a more potent defence strategy. Also in this game the difference between well trained and seasoned soldiers facing up to part time raw militiamen reveals itself especially once the combat gets close (and hot!) Only once did the South Australian’s take advantage of the ‘two unit’ set up option and that turned out to be one of their wins. I won’t go into the strategies tried by us in depth as I don’t want to give too much away in case you decide to try this scenario out!

To increase the South Australian’s chances of winning this scenario you could reduce the Russian side by a handful of men and deploy the remaining ones in two units.

While the early light of the rising sun slowly illuminated a solitary farm house amongst rolling fields and copses many pairs of eyes squinted and focused in an easterly direction. They were looking directly at the structure, this unobtrusive wooden building is what these men were here to seize!

A high-pitched whistle broke what to the Russians were the strange songs of the even stranger birds and it heralded the beginning of their assault on “Ol’ Bob’s Homestead”. Captain Klebb only knew the farm building as “Structure IV” and he knew it was defended! He had deployed two thirds of his men in line and they were to cross the fallow field directly toward the farm whilst Sergeant Gorlov led the rest of the force on in open formation to the right with the intention of taking the objective from the flank and rear. He also thought this method of attack would split the defensive fire of the Colonial militia. The battle hardened men of the 36th Division roared the name of the Tsar and moved out!

Captain Searcy and his ‘chaps’ were enjoying a fry up and boiling a billy to prepare tea to accompany their breakfast when Rifleman Marsh yelled at the top of his voice, ”Oi Ruskies on their way boys…” everyone stopped what they were doing and jumped into life and sprinted to their pre-planned defensive positions, Captain Searcy placed himself in the middle of the enclosure with the homestead’s owner Bob Menzies beside him, Bob carried his trusted Winchester repeater he had bought while on a trip to Melbourne recently he muttered, “Right in the middle of our bloody breakfast!’ to which Searcy calmly replied, “These Russian fellows have no manners!’ he grinned at the farmer and cocked his revolver!

The professional Russian infantrymen knew their job well and they moved rapidly toward their objective. The defenders peppered them with hot lead and several of their number fell but they ‘soldiered on’ moving quietly forward. Sergeant Gorlov’s section suffered severely from the defenders fire but continued to sweep around the left flank of them.

The South Australian’s aimed, fired and reloaded as quickly as they could manage. They saw several of their foes drop like sacks of wheat from a wagon tray but felt a strange eerie feeling as the silent ranks continued to approach despite the casualties they had taken, the quiet was unnerving but the defenders carried on dealing death from their Martini Henry rifles.

After the Russians crossed the track before the homestead as arranged, a last volley was fired into them by the militiamen and the withdraw toward the homestead began as that is where Searcy planned to have his main defensive position, but in an instant everything changed from order to confusion as the Russians broke ranks a quick sprint saw them over the fence and into the enclosure plus Sergeant Gorlov’s men were upon the South Australians and a melee had broken out on the left!

Searcy and Deakin’s voices roared above the din of battle and as Private Francis Jones a local butcher fell to the hands of a Russian infantryman order seemed to prevail most of the section were in the homestead and four with Menzies had hopped the rear fence as planned to cover the back door. Not quite everyman was safe however, no one knew whether Privates Marsh and Lillee made a conscious decision to be a suicidal rear guard or in the confusion they didn’t hear the calls of Searcy and Deakin but there they stood in the middle of the enclosure surrounded by thirty bloodthirsty Russian warriors!

Captain Klebb was impressed by his men’s stoic advance but was concerned by the losses especially to Sergeant Gorlov’s men. Hell he thought this is war so he pushed that from his mind and ordered his men to close on the Colonials who he believed had broken as they retired from the fence line they were at. Forward the Russians surged and on the right a South Australian fell in hand to hand combat but they came to an abrupt halt, a surreal sight befell them two Redcoats stood staunchly in front of them as if they were invincible. The crack of a Martini Henry, a thud and a cry of anguish from a Russian broke the spell they were under and again they surged after the Redcoats now roaring as they went.

Privates Lillee and Marsh stood like rocks in a sea of green tunics and again and again they parried, they lunged, they fired and forced their Russians assailants back, at one point Private Lillee calmly stood to attention, fixed his bayonet and then continued to fend off the Ruskies! Finally both of these brave men were overcome but they held up forces that Captain Klebb needed desperately at the Homestead!

Sergeant Gorlov’s men meanwhile raced around the rear of the building but were pushed back by Menzies and Private Holt and another two other from his sections gained entry to the building via the southern window only for one to die at the hand of Sergeant Deakin and the other to be pushed back out the window. This was too much for Sergeant Gorlov’s troops they broke and fled toward the apple orchid to the south, their part in the battle was done!

Corporal Orlov’s section cleared the men from the farms eastern fence and arrived at its back door only to have Bob Menzies and Private Holt slam it and bolt it in their faces, the other three Colonials privates allocated to this area were left lying in pools of their own blood!

The main action was at the Homesteads front wall where a door and two windows became the focus of a score of men some in red and some in green The action was fast and furious as the Russians forced themselves into the building only to be pushed straight back out! Captain Klebb roared encouragement to his men while the South Australian’s rallied around Sergeant Deakin who even though wounded, fixed his bayonet and called “Give ‘em hell boys!”.

But the experienced Russian were just too overpowering Captain Searcy knew his men were done so offered to surrender, Klebb wanting to save his own men’s lives (the order to save manpower as reinforcements were not expected set firmly in the back of his mind) graciously accept Searcy’s call and the action was over!

So it was that the four of the five surviving defenders of the homestead became captives, also several other defenders who lay wounded in the enclosure were collected for internment, included amongst these were Privates Lillee and Marsh.

Captain Klebb, after he oversaw the destruction of the Colonials communications equipment spoke alone for several minutes with Bob Menzies and after relieving him of his prized Winchester let him go as he deemed him a civilian. The South Australian’s were lucky they were pitted against Russian regulars led by an educated officer who knew the value of captives for hostage trading and interrogation, had they faced Cossacks their lives after surrender would have been quite short!

Soon after the firing stopped, the Russian column with their and wounded and captives headed west back to their lines. 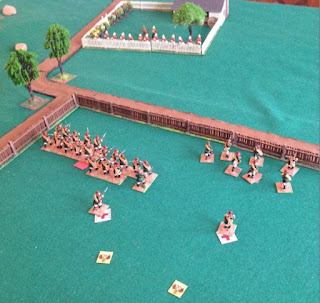 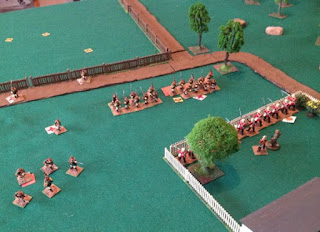 After firing in their first Action Phase the Colonials plan was to withdrawl to the homestead I misjudged this move as there are limits on the number of men allowed through doors and windoews each turn I decided to leave two troops to stall the Russian horde, there was no other real option for me! It made an interesting battle as one (Marsh) lasted six Action Phases and the other (Lillee) lasted nine this kept five Russians tied up during the attack on the homestead!
The Militiamen fire and retire! 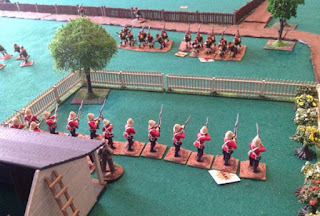 The Russians break ranks and pressure the Colonials! 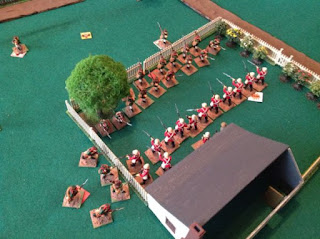 Gorlov's section actually get to melee the Redcoats far right! 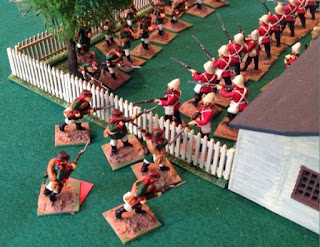 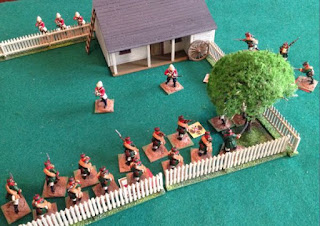 The Russians surge toward the homestead! 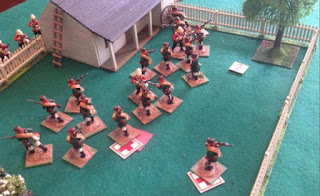 While the fight in the enclosure contined Gorlov to the south of the farm made his move to get to the back door and through the southern window of the farm unfortunately for them even though they got into the building through the window they lost two more men breaking their morale, they fled toward the orchard in haste!

Gorlov's men dash for the southern window and back door 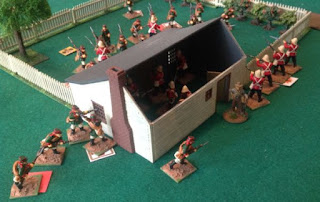 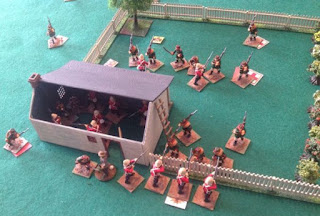 With Gorlov out of action Orlov's men tried to flank the house crossing the eastern fence and trying for the back door while Klebb's men assault the front door and windows. 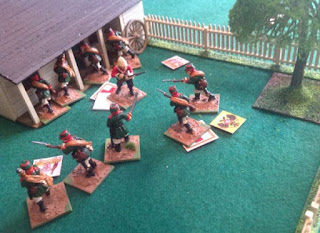 Orlov's men clear the eastern fence but they are too late to get into the farm through the back door Bob Menzies and Private Holt who turned back Gorlov's section slam the door in their faces! 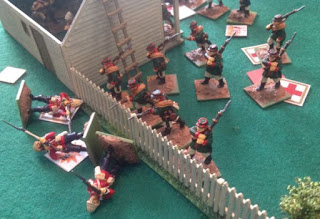 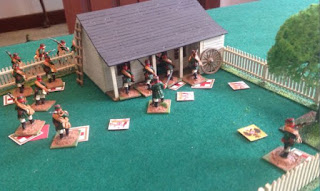 The last stand in the homestead, the Colonials failed a morale test and were routed we agreed that since they had no retreat route that they were allowed to surrender rather than get slaughtered! 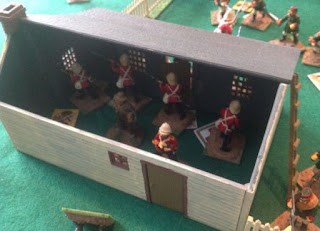 This particular game was a great one and actually closer than it looked one Russian unit broke completely (Gorlov's) and Klebb's unit got 'Hold' morale results twice one less on either of those die rolls and they would have run too leaving Orlov's unit by itself...a very near run thing indeed!


Scenario Three will see the South Australian’s on the attack and their opponents will be not be the professionals of the 36th Division but the men of the far east, Siberians!
Posted by Captain Darling at 19:02