These are the set up details and special rules for the second of the The Russians Are Coming campaign games. A map of the play area is included. Please feel free to try this yourselves (you may have to adapt it for your rules) and let me know how you go!

South Australians one unit – fire & melee as raw, the officer & NCO are veteran


South Australians – may deploy in up to two groups of any strength anywhere on the board. They are hidden until the Russians contacts them, the Russian has a line of sight to them (only if they are in the open) or the South Australian player chooses to reveal them to move or fire them


Special Rules
Below is Captain Darling's map of Bob Menzies homestead and the surrounding area, he submitted it with the action report to Lieutenant-Colonel Downes on the afternoon of Wednesday October 20 after he visited the location and recieved details of the early morning skirmish. 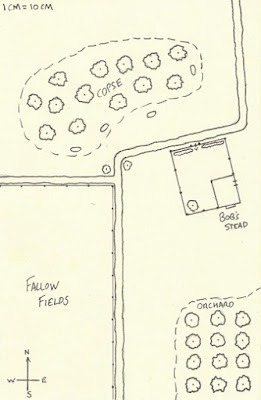 The below Scale and  Legend were attached to the Captain's map after the campaign, they were created by someone unknown in later years!

Just a note her on the special rule covering shooting into the sun, for ease of play we went with any shot in a westerly direction no matter how slight the angle was a shot 'into the sun'. It saved the use of protractors and long straight edges, if you play this scenario feel free to change this!

The "historical" AAR will follow shortly!
Posted by Captain Darling at 18:13